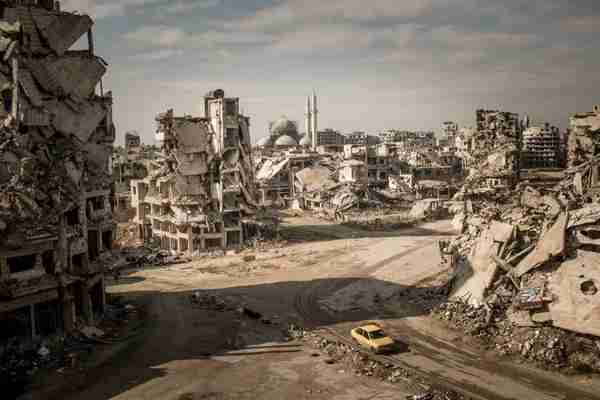 A recent picture of Homs, where the Syrian government claims that it has restored peace, security and stability (Der Spiegel)

This was a very complex, well-planned major attack on some of the regime’s most highly secure military installations. At the very least, this is a major embarrassment to Syria’s president Bashar al-Assad, and the attack was likely partially an inside job.

Syrian opposition leaders condemned the terrorist attack and suggested that only people with security clearances could get close to the areas where the attacks took place.

Syrian state media is blaming the attack on Tahrir al-Sham, an alliance of al-Qaeda linked terrorists, including Jabhat al-Nusra (al-Nusra Front, now Jabhat Fateh al-Sham or JFS). According to Syrian regime media, “the victories of the Syrian Army made the terrorists frenzied and pushed them to commit this coward terrorist atrocity in a hopeless attempt to undermine the capability of the security services, which managed to establish security and stability in Homs city.”

In a separate attack blamed on the so-called Islamic State (IS or ISIS or ISIL or Daesh), terrorists shot mortar rocket shells into the targeting several sites at a gas factory, including its main natural gas pipeline, starting a fire.

Once again, so-called Syria ‘peace talks’ are near collapse

A new Syria peace conference is just beginning in Geneva. There have been so many of these conferences, each one ending in farce, so no one was expecting much from the one either. The multiple coordinated attacks in Homs on Saturday seems to indicate that this peace conference will end like the others.

Last year, Bashar al-Assad predicted that the destruction of Aleppo was “history in the making,” and would end the war:

This was pure fantasy by al-Assad who, as I’ve written many times in the past, is a delusional psychopath and genocidal war criminal.

Al-Assad was thought to believe that as soon as Aleppo was destroyed, the jihadists groups would go home, as they had no reason to go on fighting. As I’ve written many times, this is a generational Awakening era in Syria, which means that young people would never simply give up and go home.

In fact, this gives rise to a question I’ve raised many times. Al-Assad started his massive exterminations of Sunni civilians, including many women and children, simply because they were peacefully protesting. Suppose, hypothetically, al-Assad “won” the war in some sense. What would he do if young people started protesting again — which would certainly happen in a generational Awakening era? Would he start barrel-bombing innocent women and children again? And in a generational Awakening era, you can be certain the protests would continue.

Russia is widely believed to want to stop fighting in Syria. Al-Assad’s army was close to collapse, by al-Assad’s own admission, in 2015, forcing Russia to enter the war to keep al-Assad’s army from collapsing completely. I’ve heard several analysts point out that Russia’s economic situation is so bad that the government has to cut expenses, and withdrawing most Russian forces from Syria is one way to do that.

It may at some point occur to Russia’s president Vladimir Putin that if he wants the war in Syria to end, then he has to stop supporting Bashar al-Assad, and allow someone else to replace him. There’s no sign of anything like that yet, especially because Iran is bitterly opposed to allowing al-Assad to step down, but Putin at some point may realize that it’s the best choice for Russia.

Generational Dynamics predicts that the Mideast is headed for a major regional war, pitting Jews against Arabs, Sunnis against Shias, and various ethnic groups against each other. Reuters (24-Feb) and AFP and Reuters and RTE (Ireland)