On Friday, Japan conducted its first-ever civilian missile evacuation drill, simulating an attack by North Korea against a fishing town in the Oga peninsula.

Reuters relays a few scenes from the exercise:

“The missile is seen to have landed within a 20-km (12-mile) boundary west of the Oga peninsula,” a speaker blared during the evacuation. “The government is currently examining the damage.”

Residents of the largely rural peninsula jutting into the ocean about 450 km (280 miles) north of the capital, Tokyo, made their way to a designated evacuation center equipped with emergency kits and protective gear.

Schoolchildren in another part of town crouched down to the ground before hurrying inside a gymnasium.

“The drill began with a government alert issued at 9:30 a.m. warning of a possible missile launch,” reports the Associated Press. “Municipal officials then used loudspeakers and emails to urge residents to seek cover at designated evacuation centers.”

Several older residents of Oga described the drill as frightening. “If it did actually happen, I don’t think we can do what we practiced today. We’ll just be panicked,” worried 73-year-old Emiko Shinzoya.

About 100 people were involved in the drill, according to NBC News. The authorities took care not to name North Korea as the hypothetical antagonist, instead referring to “Nation X.”

The Oga Peninsula just happens to lie due east of where North Korea’s provocative missile launches splashed down, as seen in this CNN infographic, published the day after the launches: 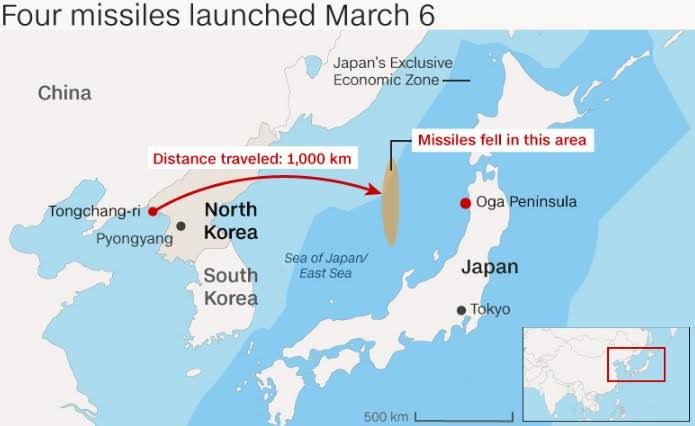 The U.S. Air Force base at Misawa lies beyond Oga and would be a likely target for North Korean ballistic missiles. Authorities told participants in the evacuation exercise that debris from airborne missiles falling in their area was one of the specific dangers they faced.

American, Japanese, and South Korean forces are currently conducting exercises to intercept North Korean missiles in flight, South Korea is deploying the American THAAD missile defense system, and Japan has been considering improvements to its own missile intercept capabilities.

This drill is the latest evidence that last week’s launch of four ballistic missiles at Japan, reportedly as part of a training exercise to attack American military bases, was a game-changer for Japan-North Korea relations. It might be more precise to say it exacerbated tensions and accelerated preparations that had already been in progress for some time, as The Diplomat notes Tokyo began planning civilian missile evacuation drills in January.