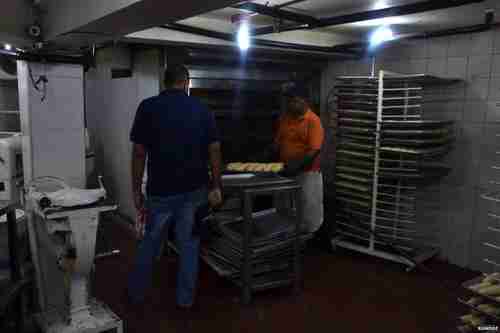 This is a baker in Caracas being arrested by a government inspector, with his illegal croissants in plain sight (BBC)

Just when you think that Venezuela’s Socialist president Nicolás Maduro can’t make himself look more like a total moron than he already has, something like this comes along: Bakers are being arrested.

Because flour is in short supply in the Socialist economy, Maduro has ordered bakeries to produce only French bread, white loaves, or pan canilla. Furthermore, all of these items are price-controlled, which means that they must be sold at the government-dictated price.

Bakers are now being arrested for the following crimes:

Inspectors are visiting all the bakeries to make sure that these rules are followed, and violators are arrested. Over 700 bakeries were inspected in Caracas.

For example, the bakers working in two different bakeries in the capital city Caracas were arrested over the weekend for selling bread loaves smaller than the government-dictated size. According to William Contreras, the head of Venezuela’s consumer protection agency, SUNDDE:

A loaf should weigh 180 grams. These gentlemen here produce [their bread loaves] as 140 grams, and charge it as though it were 180.

While they are in jail, state-appointed bakers, probably Maduro’s political cronies, will run the bakery.

Venezuela’s Socialist economy has been a disaster for years. Citizens have to queue for hours to get basics like milk, rice, flour, ketchup, diapers, and toilet paper. Crime and violence are rampant. 75% of Venezuelan homes are living in poverty. The government has ordered the jailing of factory owners if their factories cannot produce products as ordered. Venezuelanalysis and Bloomberg and BBC and Miami Herald

Venezuela’s inflation rate is the highest in the world. In fact, it has gotten so high, that Venezuela’s Socialist government has ordered the central bank to stop reporting it.

Kim Jong-nam, the half-brother of North Korea’s child dictator Kim Jong-un, was assassinated in Kuala Lumpur airport in Malaysia on February 13, minutes after two women each rubbed his face with a cloth in the middle of the airport.

An autopsy by Malaysian doctors concluded that the poison that killed him was VX nerve gas. Touching just one drop of VX can kill you within minutes, which appears to have happened to Kim Jong-nam. The problem is that questions were immediately raised about why the two women who applied the poison were not also killed, and why nobody else in the airport was harmed, including the medics who initially treated Kim.

I cannot see how the accused women would have administered a fatal dose of VX directly to the victim without sustaining corresponding life-threatening injuries themselves.

There is also no report of any trace of VX – or of any cloths or containers carrying traces of it – at the ‘crime scene’.

However, there is one explanation that might make sense. A “binary” version of VX, called VX2, has two components that are individually harmless, but lethal when mixed. There were two women involved, and each one could have applied one of the components to the victim’s face, so that they were only mixed on the victim’s face.

That does not explain everything – like how the medics who treated Kim escaped contamination. Straits Times (Singapore) and Guardian (London)