Brexit: The die is cast, and the EU is playing hardball 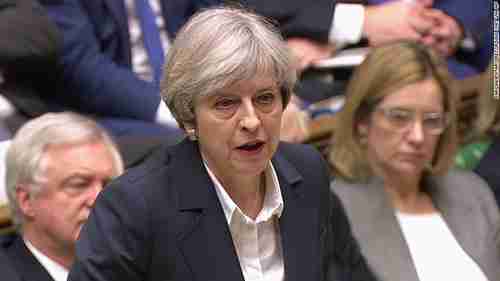 I hadn’t realized how final the action was on Wednesday, when Britain’s prime minister Theresa May invoked Article 50 of the Lisbon Treaty, triggering a two-year negotiation period leading to the United Kingdom official exiting the European Union as one of its member states.

I had thought that during the two-year negotiation period, it was at least possible that saner heads might prevail, and the UK would change its mind and remain in the EU. However, it turns out that once Article 50 is invoked, the decision is final, and the UK can no longer change its mind. If the UK wants to remain in the EU, then remaining would require approval of all 27 of the remaining member states, and that seems almost impossible, given the vitriolic nature of today’s politics.

So the die is cast, and now the serious negotiations must begin, and EU negotiators are playing hardball.

Theresa May: “No deal is better than a bad deal.” This means that Britain will walk away from a deal if it is not a good deal.

EU officials: “Britain must not get a better deal outside the EU than it has within the EU.” EU officials fear that a good deal for Britain might encourage other EU members to leave.

Britain and Theresa May want the first subject of negotiation to be trade so that businesses in both the UK and the EU can make plans for conducting business in the future.

Donald Tusk and the European Commission are refusing to take that route. They want the first order of business to be the “terms of the divorce” – how you split the assets and liabilities.

In particular, EU officials are saying that the UK must pay the EU some €60 billion, and only when that issue is settled will they be willing to discuss trade and other issues important to Theresa May and Britain. The 60 billion includes such things as pension payments to British nationals working for EU employers and spending commitments for EU projects and social programs that Britain committed to contributing to when they were still in love. Some British politicians are saying that they refuse to pay any of this, so this is a potentially serious issue.

In her letter to European Commission president Donald Tusk, Theresa May wrote:

It is in the best interests of both the United Kingdom and the European Union that we should use the forthcoming process to deliver these objectives in a fair and orderly manner, and with as little disruption as possible on each side. We want to make sure that Europe remains strong and prosperous and is capable of projecting its values, leading in the world, and defending itself from security threats. We want the United Kingdom, through a new deep and special partnership with a strong European Union, to play its full part in achieving these goals. We therefore believe it is necessary to agree the terms of our future partnership alongside those of our withdrawal from the European Union.

Many people are describing this as a threat, implying that the security relationship between Britain and the EU would be threatened if Brussels demanded that the €60 billion issue be resolved before anything else could be even discussed.

There is one issue that analysts are saying should be easy to resolve: The question of what happens to EU nationals working in Britain, and to British nationals working in the EU. Issues like medical benefits, pensions, and freedom of travel will have to be resolved. Although these problems are big enough to seem insurmountable, analysts are saying that both sides are anxious to resolve them, and so it will be done.

On Friday, Donald Tusk will release his proposed negotiating guidelines for Brexit talks. The proposal will then have to be approved by the remaining 27 EU member states. Whenever that happens, then the negotiations can begin.

I heard one analyst ways that almost nothing will be accomplished in the negotiations for about 18 months, until October 2018, at which time everyone will go into a panic. Text of Theresa May’s letter and Daily Mail (London) and Reuters

So the government is proposing “The Great Repeal Bill,” which will do the following:

According to Britain’s government, there are about 12,000 EU regulations in force in Britain, about 7,900 implemented EU directives, and some 186 acts of Parliament that will have been absorbed into British law, and then amended over time.

Furthermore, existing EU case law will continue to have precedence of existing British law. According to the description of the repeal bill:

This reminds me of the old saying: “Be careful what you wish for. You might get it.” UK government – The Great Repeal Bill and Business Insider and CNN

Scotland demands a new referendum on leaving the EU

Of the four nations in the United Kingdom, England and Wales voted for Brexit, while Scotland and Northern Ireland voted to remain in the EU. Now they are being forced to leave the EU against their will.

On September 18, 2014, Scotland held a referendum on the question of whether Scotland should leave the UK and become an independent country. This would have dissolved the 1707 union between England and Scotland that came out of the War of the Spanish Succession. If the referendum had passed, then Scotland might have left the UK and become an independent country. It wouldn’t automatically have been a member of the EU, however, as joining the EU would have required the approval of all 28 countries.

The referendum was voted down, but that was before Brexit. Now, Scotland’s parliament has voted by 69 to 59 to hold a new referendum. However, a new referendum on this subject cannot be held without the approval of Britain’s government in London.

Theresa May has said that the UK government will not approve the referendum until Brexit is completed, two years from now.

Sturgeon says that she may go ahead with an unofficial referendum. Scottish Sun and BBC

Northern Ireland considers reuniting with the Republic of Ireland

Northern Ireland also voted to remain in the EU, but the situation is quite different than for Scotland.

This is an extremely emotional issue in Ireland, and may even result in new violence. RTE (Ireland) and Irish Times