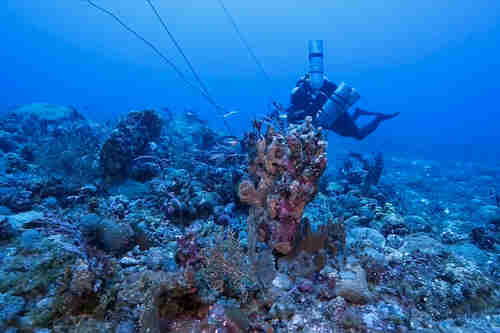 A diver checks out the coral cover during an expedition at Benham Rise last May 2016. (Oceana Philippines)

As I’m writing this on Thursday evening, American ships in the eastern Mediterranean Sea have launched dozens of cruise missiles at the Shayrat Airbase in Syria. This airbase was chosen because it is believed that Monday’s nerve gas attack was launched from this airbase. The attack appears to the following the outline that I described in yesterday’s article, though it apparently caught some analysts by surprise that the military action occurred so quickly after the nerve gas attack. It’s not expected that this will be followed by a long series of further military actions. Washington Post

Philippines president Rodrigo R. Duterte on Thursday ordered the army to deploy troops to “nine or 10” unoccupied islands and reefs in the Spratly Islands in the South China Sea that are owned or claimed by the Philippines. According to his televised announcement

The unoccupied, which our ours, let’s live on it. It looks like everybody is making a grab for the islands there, so we better live on those that are still vacant.

At least, let us get what is ours now and make a strong point there that it is ours.

“We try to be friends with everybody, but we have to maintain our jurisdiction, at least [in] the areas that we control I have ordered the armed forces to occupy all these islands and put up the Philippine flag to occupy all these. …

This coming Independence Day [June 12], I may go to Pagasa to raise the flag. We want to make a strong point that that is ours.

Duterte also said “bunkers or houses and provisions for habitation” were to be built. Analysts are pointing out that this cannot be accomplished because the islands and reefs are too small. For that reason, some analysts are speculating Duterte would like to initiate reclamation activities to create artificial islands, as the Chinese have been doing, although that kind of reclamation is probably too expensive for the Philippines budget.

China has not yet commented on Duterte’s order, but is certain to express the usual furious outrage. China has claimed the entire South China Sea as its sovereign territory and has built artificial islands and military bases. However, these claims and activities that were declared illegal in a harsh ruling by the United Nations Permanent Court of Arbitration (PCA) in the Hague, in a case brought by the Philippines. Daily Inquirer (Manila) and Reuters and Washington Post

Philippines sends warship to Benham Rise to protect from China

Benham Rise is not in the South China Sea, but is east of the Philippines, and part of the country’s continental shelf. According to Philippines’ defense secretary Delfin Lorenzana:

The navy will henceforth regularly patrol Benham Rise partly due to past Chinese activities there but more importantly, because it is part of our continental shelf and awarded to us by the United Nations.

According to Philippines media, China has been surreptitiously exploring Benham Rise for several months, breaking international and Philippine laws in scouring the seabed and waters without permission. China claimed that vessels were there for “innocent passage,” but Chinese activities have turned out to have two objectives: First, to determine possible submarine hiding areas for future submarine warfare, and second, to determine through sound reflection and refraction possible oil and gas.

China’s activities in Benham Rise have incited a public furor, and may be the reason for Duterte’s orders to the army to occupy South China Sea islands. Philippine Star and The Rappler (Philippines)