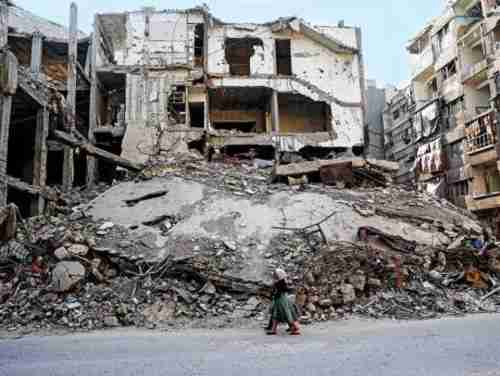 Every few months, Russia or the United Nations announces a new peace plan to end the war in Syria. Each time, the mainstream media credulously reports that there is finally “hope” that the war will end. Each time, I always use the word “farcical” to describe the peace plan, because the plan never even makes sense. And each time, the plan falls apart within a few weeks.

In January, just a mere four months ago, I described the peace plan being signed at that time as follows:

What’s wrong with this picture: There’s a civil war in Syria between the Shia/Alawites versus the Sunnis. On Tuesday, Russia, Iran and Turkey signed a peace agreement.

The thing that’s wrong with this picture is that nobody from Syria signed the agreement. It was an agreement among outsiders, and did not include any parties who are nominally the opponents in Syria’s civil war.

However the main reason, according to analysts, that this time it’s different is that Russia is making it clear that it’s willing to enforce a peace in Syria, so that it will get the credit for bringing about peace.

Exactly the same description applies to the peace agreement signed on Friday. The meetings were being held again in Astana, and the same three (non-Syrian) parties signed the agreement, while the parties that are fighting on the ground did not sign it.

In this peace agreement, there will be four “safe zones” or “de-escalation areas.” The safe zones will be surrounded by “security zones,” which will be patrolled to ensure the peace.

Here are some excerpts from the text of the agreement:

The Islamic Republic of Iran, the Russian Federation and the Republic of Turkey as guarantors of the observance of the ceasefire regime in the Syrian Arab Republic (hereinafter referred to as “Guarantors”): … have agreed on the following.

1.the following de-escalation areas shall be created with the aim to put a prompt end to violence, improve the humanitarian situation and create favorable conditions to advance political settlement of the conflict in the Syrian Arab Republic: [listing areas in Idlib, Homs, Ghouta, southern Syria]…

The creation of the de-escalation areas and security zones is a temporary measure, the duration of which will initially be 6 months and will be automatically extended on the basis of consensus of the Guarantors.

2.Within the lines of the de-escalation areas:

—hostilities between the conflicting parties (the government of the Syrian Arab Republic and the armed opposition groups that have joined and will join the ceasefire regime) with the use of any kinds of weapons, including aerial assets, shall be ceased;…

As usual, this is laughable. The Syrian regime and the armed rebels have not signed on to this agreement, but hostilities between them “with the use of any kinds of weapons, including aerial assets, shall be ceased.” You’ve got to be joking.

In fact, as in the case of every other “peace agreement,” there is no intention that the fighting stop. The Syrian regime of Bashar al-Assad reserves the right to continue bombing any places that contain people they consider to be terrorists, and that includes schools, hospitals and marketplaces, using barrel bombs or any other kind of bomb. The opposition rebel groups have also reserved the right to fight the regime in case of what they view is any regime violation of the agreement. And of course the al-Qaeda linked al-Nusra Front, and so-called Islamic State (IS or ISIS or ISIL or Daesh) are not included in the deal in any way.

According to US Defense Secretary James Mattis:

It’s all in process right now. Who is going to be ensuring they’re safe? Who is signing up for it? Who is specifically to be kept out of them? All these details are to be worked out, and we’re engaged.

According to the text of the agreement, the maps of the four safe zones have not yet been drawn up, and won’t be drawn up until June. Gulf News and The Hill and Arab News

The only significant difference between this and previous agreements is that this agreement specifies that military forces will be deployed to guarantee the security of the safe zones. The assumption is that these will be international forces, since none of the parties doing the fighting in Syria can be trusted.

If any violation takes place, the Syrian army will be prepared to respond in a decisive manner.

So who is going to respond if the Syrian regime commits a violation? Once again, this is completely laughable.

It is almost beyond belief how much destruction that Syria’s president Bashar al-Assad has caused. He drops barrel bombs laden with metal, chlorine, ammonia, phosphorous and chemical weapons onto civilian neighborhoods, or using Sarin gas to kill large groups of people. He considers all Sunni Muslims to be cockroaches to be exterminated. Tens of thousands of young jihadists came to Syria from 86 countries around to world to fight al-Assad, creating ISIS. Al-Assad has driven millions of Syrians out of their homes, into Lebanon, Jordan, Turkey and Europe.

So now we have this Russian proposal for four “safe zones” containing all the Sunni men, women and children that al-Assad has been trying to exterminate for the last six years. The Arab media is calling them “prisons” or “concentration camps,” because all of these Sunni groups will be trapped in there, unable to leave. And who will be guarding these safe zones? The Syrian army, led by Bashar al-Assad, who would like to exterminate all their residents.

As I’ve said many times, there is no hope of this war ending, as long as Bashar al-Assad is in power. AFP and Rudaw (Kurdistan) and SANA (Damascus) and Arab News