The Syrian Central Bank has debuted a new, higher denomination bill featuring dictator Bashar al-Assad, the first time Assad has appeared on the nation’s currency. Such an appearance may imply renewed confidence in his stability as a leader, as the Islamic State rapidly loses territory in its “capital,” Raqqa.

The Syrian state media outlet SANA unveiled the bills this week, a “new 2,000 Syrian Pound banknote” that began circulating in Damascus on Sunday. Governor of the Central Bank of Syria (CBS) Duraid Durgham debuted the bills at a press conference where he said, “the Bank found that it is the right time to put the new banknotes into circulation due to the wear and tear that affected the currency currently in circulation.” 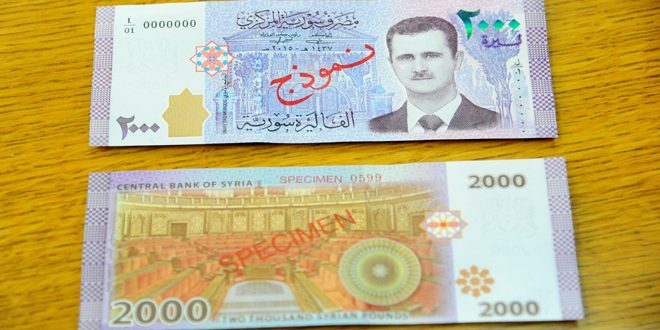 Durgham also cited “the circumstances of the war and exchange rate fluctuations” as reasons for the new note but apparently did not address Assad’s likeness on the bill, according to Reuters. The news agency notes that the new currency is worth about $4.

Assad joins his father, Hafez al-Assad, on Syrian currency. Reuters notes that the elder Assad still graces the 1,000-pound bill, which was formerly the largest bill in circulation.

Assad has defied major military operations against him and international pressure to step down following alleged human rights atrocities against rebels looking to depose him, remaining in power for 17 years. The decline of the Islamic State in much of its Syrian territory, as well as ongoing support from Russia and the Shiite tyranny in Iran, has helped him remain in power since civil war broke out in 2011. In the past month, Assad has made public appearances that seem to indicate he sees his position in power as more stable than in recent years.

Following the end of Ramadan, for example, Assad led Islamic prayers celebrating the holiday Eid al-Fitr in Hama province, which Reuters noted was the furthest Assad had traveled within Syria from Damascus in many years. Assad had left the country on occasion to visit Moscow.

Reuters notes that SANA billed his presence in Hama as a sign of impending victory against the rebels fighting for his ouster in territories like Idlib province. Assad has made something of a tradition of leaving Damascus for Eid, leading prayers in the devastated city of Homs in 2016.

Following the Eid appearance, Assad resurfaced at the end of June to visit a Russian airbase in western Syria, where photos showed him inspecting and riding a Russian Sukhoi SU-35 warplane. Assad also signed a guestbook with the phrase: “the Syrian people will not forget that its Russian brothers stood next to them in this national war.”

The White House recently warned Assad and Russia against another chemical weapons attack, following American airstrikes on Syrian military targets in April, and noted that intelligence suggested military movements in concert with such an attack. In response, the Russian government accused the U.S. of attempting to justify “a new intervention in Syria” and denied that intelligence existed that Assad had planned a new chemical weapons attack on civilians.

While Assad relies on support from Russia and Iran, the governments of Turkey, the United States, and much of Europe have demanded he step down following the repeated use of chemical weapons on civilians. With the rise of the Islamic State, however, many of Assad’s most ardent critics have refocused their energy away from Assad and towards defeating ISIS.

In Turkey’s case, its officials have ceased calling their presence in the country a move to “end the rule of the tyrant Assad” and have instead refocused on hindering the operations of the Syrian Kurdish People’s Protection Units (YPG/YPJ), a U.S.-allied militia leading the operation to liberate Raqqa.