Thousands of migrants flee to Canada, fearing deportation in the US

Officials in Canada are scrambling to accommodate hundreds of migrants fleeing from the United States in fear of being deported back to their home countries by the Trump administration. 500 migrants arrived on Tuesday, and another 300 people arrived on Wednesday. The average has grown to 150 people per day requesting asylum in Canada.

Some 4,345 migrants arrived in the first six months of 2017, and another 1,000 arrived in July alone. Migrants that cross at official land border crossing are denied asylum on the spot and are sent back to the United States, under an agreement between the two countries. The “Safe Third Country Agreement” was signed on December 5, 2002, as part of a plan to improve security between the two countries in the wake of the 9/11 attacks.

However, the agreement applies only to official land border crossings. For that reason, most migrants simply cross the border at an unmanned location. By entering Canada illegally, they bypass this agreement. They can then claim refugee status, seek asylum, and then stay while their refugee applications are being processed. Hundreds of migrants have crossed into Canada by walking along a dirt crossing into the Quebec town of Saint-Bernard-de-Lacolle.

Canadian authorities were unprepared for the sudden surge in migrants. To accommodate them, Montreal’s Olympic Stadium, built for the 1976 summer Olympics, has been transformed into a makeshift refugee center. Others are being sent to schools, which are not in session during the summer. Other accommodations will have to be found when schools open in September.

Some 70 percent of the migrants are from Haiti, but others are from Sudan, Turkey, and Eritrea. There are also some who are US citizens fleeing to Canada.

Most of the asylum seekers are from Haiti, who arrived in the United States following the January 2010 earthquake. The Department of Homeland Security under President Obama granted Haiti the Temporary Protected Status (TPS) benefit following the earthquake, which permits them to stay in the country and work, and send remittances back to their families in Haiti.

The TPS for Haiti was meant to last only 18 months, but it kept getting 18-month extensions under the Obama administration. When the last TPS extension expired in May, the DHS announced a final six-month extension. In a statement from DHS:

The Department of Homeland Security urges Haitian TPS recipients who do not have another immigration status to use the time before Jan. 22, 2018, to prepare for and arrange their departure from the United States.

So many Haitian refugees have been taking the DHS advice and arranging their departure from the United States by traveling to Canada. They were encouraged by a welcoming tweet from Canada’s prime minister Justin Trudeau on January 28, shortly after Trump announced his travel ban:

To those fleeing persecution, terror & war, Canadians will welcome you, regardless of your faith. Diversity is our strength #WelcomeToCanada

Trudeau’s tweet was followed by a picture of him greeting a refugee family. The two tweets received over a million likes and half-a-million retweets. Canadian Broadcasting and Canadian TV News and AFP 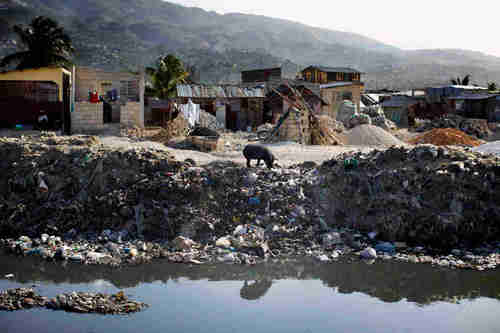 Haiti appears to be a cursed country. Before 2010 it was already almost the poorest country in the world, with many neighborhoods strewn knee high in garbage. Then, on January 12, 2010, the earthquake struck, killing 316,000 people and leaving more than 1.5 million people homeless, and 3.3 million facing food shortages.

Then, the United Nations sent in peacekeepers to aid in the cleanup. The peacekeepers didn’t accomplish too much cleanup, but they did infect the water in Haiti with cholera, in a country which had previously been free of cholera. This caused hundreds of thousands of cases of cholera. It was later attributed to the peacekeepers from Nepal.

Billions of dollars in aid have been spent in Haiti since then, apparently accomplishing little because of pervasive corruption. The Red Cross, for example, is accused of building only six homes in Haiti with nearly half a billion dollars in donated funds and spending millions on internal expenses.

Haitian migrants have been flooding into other countries, usually in order to work and send remittances back to their families. The Dominican Republic recently granted a one-year extension to some 230,000 Haitian migrants trying to renew or obtain residency permits. Other countries, including the Bahamas and Turks-and-Caicos have also had to cope with Haitian migrants. Huffington Post (12-Jan-2017) and Reuters and NPR and Magnetic Media TV and Bahama Journal