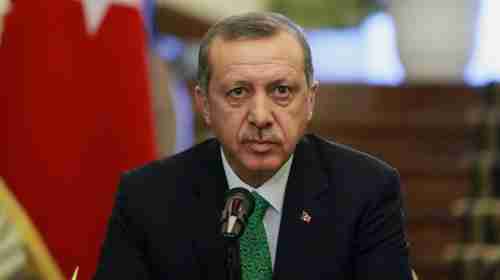 The rapidly deteriorating relations between Germany and Turkey took another bizarre twist on Friday when Turkey’s president called on Turks living in Germany not to vote for the Christian Democrat Party (CDU) the party headed by Chancellor Angela Merkel, or for any party that supports Merkel. Speaking after Friday prayers in Istanbul, Erdogan said:

I call on fellow Turks in Germany not to vote for the CDU, the SPD or the Greens, which are all hostile to Turkey. Support those who are not enemies of Turkey.

I think Turkish voters should teach a necessary lesson at the ballot box to those political parties who are so aggressive and disrespectful toward Turkey.

Merkel will be running for a fourth term in the upcoming elections on September 24. Merkel rejected Erdogan’s “meddling,” and said:

German voters, including the ones with Turkish background, have a right to vote freely. We will not stand for any kind of interference.

Erdogan’s speech was probably prompted by a statement on Thursday by Germany’s Foreign Minister Sigmar Gabriel accusing Turkey of practicing “hostage diplomacy” by arresting foreign nationals on bogus charges and then holding them in prison while demanding the extradition of someone he claims was part of last year’s July 2016 aborted coup.

In February, Turkey arrested Deniz Yücel, a Turkish-German political correspondent working for Die Welt, accused of reporting on the activities of the Kurds in Turkey. Erdogan has accused Yücel and other foreign nationals of terrorist activities. In July, Erdogan ordered the arrest of Peter Steudtner, a German human rights activist in Turkey.

The arrest of Steudtner caused Sigmar Gabriel told a press conference that it was no longer safe for German people and businesses to travel to Turkey.

On Thursday Gabriel was asked by Yücel had not been released. His response:

Because Turkey, in my opinion, holds him as a hostage.

In fact, Erdogan is holding a number of German and American nationals on bogus charges. In particular, North Carolina Christian pastor Andrew Brunson was imprisoned on October 7 of last year, on charges of “membership in an armed terrorist organization,” with no evidence whatsoever. When President Trump met with Erdogan in May, Trump asked that the Turkish government “expeditiously” return Brunson to the United States.

What Erdogan wants to do is force the U.S. to extradite Fethullah Gülen back to Turkey. Gülen is a 76-year-old political enemy of Erdogan, living since 1999 in self-imposed exile in Saylorsburg, Pennsylvania, after splitting with Erdogan. Erdogan claims that Gülen orchestrated the coup from his easy chair at his resort in the Pocono Mountains.

Erdogan arrested or fired over 100,000 people since the coup on vague charges. Anyone could be arrested for any reason. If someone’s child went to one of Gülen’s schools, then the child’s parents could be arrested.

As I’ve written in the past, Erdogan’s claims make no sense. For one thing, Erdogan started shutting down media and arresting reporters months before the attempted coup even occurred. After the coup attempt, Erdogan moved so quickly to arrest tens of thousands of people that it was pretty clear that the arrests had been planned all along, just waiting an excuse to execute them.

The reason that Erdogan has been arresting American, German, and other nationals and holding them hostage is to use them as bargaining chips to force the extradition of Turks in other countries. Erdogan wants to force the US to extradite Gülen, even though Erdogan has been unable to provide evidence to satisfy a US court that Gülen had anything to do with the coup attempt.

From Germany, Erdogan wants to extradite a prominent cleric, Adil Öksüz. Erdogan accuses Öksüz of being a middleman between Gülen and coup plotters. Erdogan claims that he has provided Germany with 1,500 documents, but apparently Germany’s courts are also not satisfied that there’s any actual evidence that Öksüz was actually doing what Erdogan accuses him of.

Recently Erdogan explained his hostage diplomacy by saying that it’s the policy of the “new Turkey,” since the “old Turkey” no longer exists:

Here in Pennsylvania, there is a known charlatan [Gülen]. His back team [Öksüz], they are also in Germany, mainly in Germany, and they are all around. You feed these terrorists, then you get up and say ‘Give us Filjan.’ Do not look up, if you have a reputation, I have a judgment. First you will give it, then you will receive it from us. You are not here. There is no old Turkey anymore, this Turkey is new Turkey. You should see it as a flag race.

There is a little lost in translation, but apparently “You feed these terrorists, then you get up and say ‘Give us Filjan'” is an accusation that the US and Germany feed the terrorists, and then demand that prisoners like Brunson, Yücel, and Steudtner.

Erdogan has promised that after the September 24 elections in Germany, relations between Turkey and Germany will improve. Erdogan is assuming that Merkel will lose in the election, but even if she does, it seems unlikely that the new Chancellor will give into hostage extortion from Turkey, and so relations are expected to continue worsening.

As I’ve been writing for years, Generational Dynamics predicts that the coming Clash of Civilizations world war will pit the US, India, Russia, Iran and the West against China, Pakistan, and the Sunni Muslim countries, including Turkey. Worsening relations between Turkey and Germany are following that trend line. BuzzFeed and Anadolu (Ankara) (Trans) and Asheboro NC Courier-Tribune and Arab News