Violence between Buddhists and Muslims in Myanmar/Burma escalates dramatically 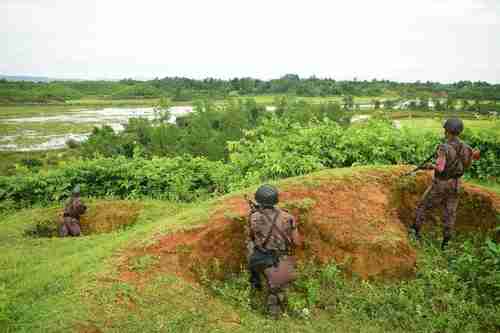 Bangladesh border guards at the border between Myanmar and Bangladesh, to prevent Rohingyas from crossing. There are already 400,000 Rohingya refugees in Bangladesh. (AFP)

Violence between Burma’s (Myanmar’s) mostly Buddhist army and Muslim ethnic Rohingyas in Rakhine State has sharply escalated in the last four days, to the point where it is feared that it may have reached a dangerous turning point.

Starting in 2011, Buddhists have been attacking Muslims in villages across Burma, particularly the 1.1 million ethnic Rohingyas in Rakhine State. Mobs of Buddhists have attacked Muslims, conducting atrocities including torture and rape, killing hundreds and forcing hundreds of thousands to leave their homes to flee from the attacks. In some cases, the Buddhists have burned entire Rohingya villages to the ground.

The current round of violence was triggered on Friday when Rohingya insurgents carried out a series of coordinated attacks against 30 Burma police outposts and an army base. Using knives, some guns and homemade explosives they killed at least a dozen security force members.

The army responded with a sweep of violence against Rohingyas, causing thousands of them to flee their villages and head for the Bangladesh border, where they hoped to cross and reach a refugee camp. The Foreign Ministry of Bangladesh said Saturday that “thousands of unarmed civilians” from Rakhine state had gathered near its border and were “making attempts to enter Bangladesh.” The Burmese army shot them as they were fleeing, including women and children, killing dozens. However, Bangladesh already has 400,000 Rohingyas in its refugee camps and its border guards are refusing to allow any more to enter, and so the Rohingyas trying to flee are hiding out along the border between the two countries. However, an estimated 2,000 Rohingyas have made the crossing since Friday.

Yesterday, Bangladesh handed over a protest note to the Myanmar envoy in Dhaka, and called upon Myanmar country to stop any fresh flow of Rohingyas towards Bangladesh. CNN and AFP and Daily Star (Bangladesh)

ARSA took responsibility for attacks on eight police posts in October of last year. Those attacks sparked a wave of deadly “clearance operations” by Myanmar’s army and forced some 87,000 Rohingya to flee to Bangladesh. The UN believes that military crackdown may have amounted to ethnic cleansing of the Rohingya.

During the past week, the United Nations Rakhine Advisory Commission, headed by Kofi Annan, issued a final report that confirmed these conclusions.

ARSA has also taken responsibility for the coordinated attacks on 30 police outposts and an army base that took place on Friday. Whereas the “clearance operations” by Myanmar’s army last October appeared to be reasonably disciplined, the reports of the army’s attacks on Rohingyas in the last three days suggest that they are extremely undisciplined and disorganized.

There are also reports of growing violence between ARSA and the Myanmar army, including reports that ARSA militants are shooting at Rohingyas who are trying to flee to Bangladesh.

India’s government is taking a strong position in favor of Myanmar’s government, and against the Rohingyas. According to external affairs ministry spokesman Raveesh Kumar:

India is seriously concerned by reports of renewed violence and attacks by terrorists in northern Rakhine State of Myanmar. We are deeply saddened at the loss of lives among members of the Myanmar security forces.

Such attacks deserve to be condemned in the strongest possible terms. We hope that the perpetrators of these crimes will be brought to justice and we extend our strong support at this challenging moment to the Government of the Republic of the Union of Myanmar.

The clashes in Rakhine state are currently turning into a mêlée that could become a lot more serious quickly, if not now, then when the next round of violence occurs. As the clashes between Buddhists and Muslims continue to grow in Myanmar (Burma), other neighboring countries are also going to be forced to choose sides. Straits Times and AFP and Reuters and Hindustan Times