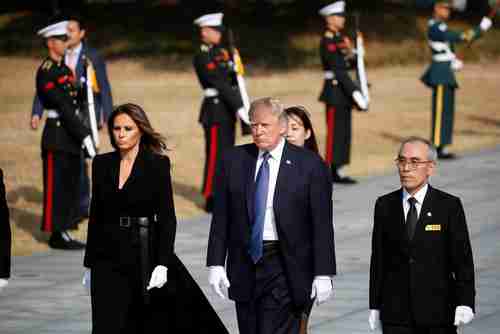 Donald and Melania Trump in South Korea on Wednesday (Reuters)

President Donald Trump, speaking to South Korea’s National Assembly on Wednesday, issued a stern warning to North Korea’s president Kim Jong-un that his continued development of nuclear weapons and ballistic missiles did not protect his regime, but instead the regime into extreme peril:

To this day, it continues to launch missiles over the sovereign territory of Japan and all other neighbors, test nuclear devices, and develop ICBMs to threaten the United States itself. The regime has interpreted America’s past restraint as weakness. This would be a fatal miscalculation. This is a very different administration than the United States has had in the past.

Today, I hope I speak not only for our countries, but for all civilized nations, when I say to the North: Do not underestimate us, and do not try us. We will defend our common security, our shared prosperity, and our sacred liberty.

America’s men and women in uniform have given their lives in the fight against Nazism, imperialism, Communism and terrorism.

America does not seek conflict or confrontation, but we will never run from it. History is filled with discarded regimes that have foolishly tested America’s resolve.

Anyone who doubts the strength or determination of the United States should look to our past, and you will doubt it no longer. We will not permit America or our allies to be blackmailed or attacked. We will not allow American cities to be threatened with destruction. We will not be intimidated. And we will not let the worst atrocities in history be repeated here, on this ground, we fought and died so hard to secure.

In addition, he did everything possible to make his warning as personally insulting as possible to Kim himself:

North Korea is a country ruled as a cult. At the center of this military cult is a deranged belief in the leader’s destiny to rule as parent-protector over a conquered Korean Peninsula and an enslaved Korean people.

I also have come here to this peninsula to deliver a message directly to the leader of the North Korean dictatorship: The weapons you are acquiring are not making you safer. They are putting your regime in grave danger. Every step you take down this dark path increases the peril you face.

Mainstream media reaction to the speech, as usual, was incoherent, with comments festooned with the usual snarky remarks about Trump himself. Nobody writing about the speech seemed to understand what Trump’s strategic purpose was, and many articles concluded that it was a wasted speech because it will not stop North Korea from continuing its development of nuclear weapons and ballistic missiles – which it certainly won’t. White House and Washington Post and CNN and The Atlantic

There is a paragraph quoted above that is worth repeating:

America’s men and women in uniform have given their lives in the fight against Nazism, imperialism, Communism and terrorism.

America does not seek conflict or confrontation, but we will never run from it. History is filled with discarded regimes that have foolishly tested America’s resolve.

Everybody knows that if North Korea attacks the U.S., then the regime will be destroyed. So Trump was making this statement not for North Korea’s benefit, but for China’s benefit. Trump is reminding China that Japan made a disastrous mistake attacking the United States in 1941, and that the U.S. defeated Japan and also saved China.

Trump and Bannon are well aware of the following:

China has previously said that if the US preemptively attacks North Korea, then China will defend it, but will not defend it if North Korea attacks first.

Testing nuclear-tipped ballistic missiles and flying them over Japan is already an act of war, and exploding one over the Pacific, as has been threatened, could threaten any aircraft or sea vessels in the area, and the radiation could be carried by the winds to any country bordering the Pacific. Any of these tests could be interpreted as a nuclear attack by North Korea requiring a military response, and if China keeps its promise, will not retaliate. However, this situation would certainly threaten the security of China.

Chinese media have been discussing China’s “Plan 2025” to overtake the United States and have worldwide hegemony by 2025. In a recent interview, Steve Bannon described China as “an enemy of incalculable power, not a strategic partner and we have to understand that.” He summarized Plan 2025 as having several objectives:

Trump’s speech was a warning to China that its plan for world hegemony is going to be a lot more difficult than they expect. Trump may even hope to persuade China to choose a different path, but that can’t happen. Generational Dynamics predicts that the world is headed for a Clash of Civilizations World War III, pitting the US, India, Russia, Iran and the West versus China, Pakistan and the Sunni Muslim countries. Breitbart and South China Morning Post