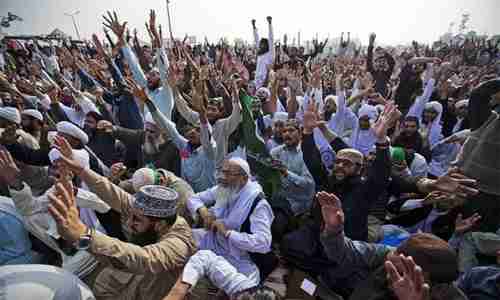 For several weeks, cities across Pakistan were paralyzed with major roads blocked by a mob of thousands of Islamists in a sit-in, escalating into clashes with thousands of police. The sit-in and riots were triggered by a phony blasphemy charge last month against a government minister, Zahid Hamid, for supposedly being responsible for modifying the wording of a government oath, omitting the name of Mohammed.

After weeks of chaos, on Tuesday, the government totally capitulated to the demands of the mob, which was led Tehreek-e-Labbaik Ya Rasool Allah of Pakistan (TLYR or TLYRAP), a small Islamist political party coming from the hardline, dangerous Barelvi sect.

The agreement has been only partially successful in ending the sit-in. The sit-in has ended in the capital city Islamabad and the adjoining city Rawalpindi. However, a TLYRAP splinter group is demanding the resignation of other ministers and is refusing to end the sit-in in the major city of Lahore, and so parts of that city remain paralyzed. Geo TV (Pakistan) and Pakistan Today and Geo TV (Pakistan) and Dunya News (India)

Tehreek-e-Labbaik Ya Rasool Allah of Pakistan (TLYR or TLYRAP) is a small political group of hardline Islamists. It was little known until it led the recent violent sit-in and forced the government to capitulate to its demands. Media sources do not suggest that they are a terrorist group linked to the Pakistani Taliban (TTP), but they do advocate an extreme and radical “Sharia law” takeover of Pakistan’s government.

In particular, they advocate the complete elimination of the persecuted Ahmadi Muslim sects in Pakistan, and possibly the Sufis as well. The phony blasphemy charge was based on an accusation that the modification of the oath would favor the Ahmadis.

TLYRAP came out of nowhere as a political group, but, as Muslims, they come the Barelvi Sect, an offshoot of Sufism. They would probably still be almost unknown today, but they were handed a gift last year when Mumtaz Qadri, a Barelvi, was executed for murdering Salman Taseer in 2011.

Salman Taseer, the governor of Punjab province in Pakistan, was shot 28 times in broad daylight in an open marketplace on January 4, 2011. The killer was his bodyguard, Mumtaz Qadri. The motive, as described by Qadri, was to punish Taseer for objecting to Pakistan’s blasphemy laws, and for calling for the release of a Christian woman, Asia Bibi, who was in jail facing execution for violating the blasphemy laws. Qadri was finally executed last year, but not before he became a national hero for killing Taseer over a phony blasphemy charge.

Pakistan as a country is becoming increasingly radicalized by Barelvi extremism, and since some of the TLYRAP militants were armed with weapons such as stones and bats, they are now becoming militarized. Pakistan Today and Al Jazeera and Huffington Post(9-Jan) and La Voix Du Nord and Hudson Institute(19-Oct-2011)

North Korea on Wednesday morning fired a ballistic missile from an area north of Pyongyang. The missile was launched almost vertically, so that it would reach a high altitude, but would not travel beyond the Sea of Japan. If used in an actual attack, it would be launched closer to a 45-degree angle, which could carry it as far any part of the United States mainland, according to several analysts.

According to physicist David Wright, co-director of the Union of Concerned Scientists Global Security Program:

It went higher, frankly, than any previous shots they’ve taken. It’s a research and development effort on their part to continue building ballistic missiles that can threaten everywhere in the world basically.

We will take care of it.

It is a situation that we will handle.

If we have to go to war to stop this, we will. If there’s a war with North Korea, it’d be because North Korea brought it upon itself, and we’re headed toward a war if things don’t change.

There are some things about the ballistic test that we do not know:

There is another thing we do not know: We do not know what Trump meant when he said, “We will take care of it.”

North Korea’s objective for the past 25-30 years was to develop nuclear missile capability that could be used to attack the U.S. mainland and use it as leverage to threaten South Korea and Japan, and he’s now very close. Wired and Reuters and San Diego Union Tribune