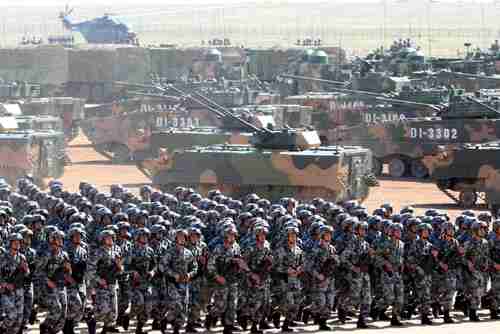 China has conducted these kinds of patrols before, but these patrols were considerably more extensive than in the past. According to China’s state media:

The PLA Air Force focused on combat readiness and has conducted a series of offshore and maritime training. The PLA warplanes’ flight paths are continuously extended, with combat readiness growing accordingly.

The PLA Air Force’s actions are justified and consistent with international laws and practices. The PLA Air Force will stick to its set plans and continue to fly further and deeper.

The air force started regular high seas training in 2015. The PLA planes circling the island of Taiwan will become routine during their training.

China has conducted numerous similar patrols near Taiwan this year, saying such practices have been normalized as it presses ahead with a military modernization program that includes building aircraft carriers and stealth fighters to give it the ability to project power far from its shores. The Diplomat and Reuters and Global Times

The latest encirclement patrol is thought to be a show of force following an explicit threat made last week by a Chinese diplomat in Washington.

Li Kexin, a Chinese embassy official, last Friday said that he has been thanking Congressional aides for providing China with a reason to use force to resolve the Taiwan question.

Picking this apart, Li is making a joke. He is referring to suggestions from American officials that the US Navy should make port calls at ports in Taiwan, as it does in many other countries. Li is saying that any US naval vessel at Taiwan’s largest port, Kaohsiung, would trigger China’s Anti-Secession Law, followed by an invasion by China’s armed forces to take control of Taiwan.

The Anti-secession law provoked massive Taiwan riots when it passed in March 2005. It orders the army to invade Taiwan if any Taiwanese official makes any move toward independence, whether by word or by deed.

Excerpts of the law are as follows:

Taiwan is part of China. The state shall never allow the “Taiwan independence” secessionist forces to make Taiwan secede from China under any name or by any means.

Article 8: In the event that the “Taiwan independence” secessionist forces should act under any name or by any means to cause the fact of Taiwan’s secession from China, or that major incidents entailing Taiwan’s secession from China should occur, or that possibilities for a peaceful reunification should be completely exhausted, the state shall employ non-peaceful means and other necessary measures to protect China’s sovereignty and territorial integrity.

I have written about the Anti-Secession law many times since 2005, and I have pointed out many times that statements by Taiwanese officials seemed to be promoting independence, and that therefore already should trigger the Anti-Secession Law. On the other hand, it is hard to see why a port call by naval vessels, so that the American soldiers could visit Taipei’s bars and perhaps get a drink or a date, would be promoting independence at all.

Since the threat was issued by a low-level Chinese diplomat in Washington and was phrased as a joke, it is hard to see the threat as intended to be serious. In fact, China’s Foreign Ministry spokesman seemed to play down the threat when asked about it:

The position of the Chinese government on the Taiwan issue, which I believe you and all the journalists here are quite clear about, is consistent and clear. We will continue adhering to the policy of “peaceful reunification and one country, two systems” in an effort to advance the peaceful development of cross-straits relations and promote the process of peaceful reunification of our motherland. Meanwhile, we will firmly uphold national sovereignty and territorial integrity and never tolerate the recurrence of the historical tragedy of national division.

However, China’s state media Global Times is issuing a veiled warning that Taiwan’s ruling DPP party and the US do not understand the full impact of the anti-secession law and that an invasion could come at any time:

The island under the Democratic Progressive Party (DPP) has become deficient of both direction and sense of security.

The Chinese mainland has never given up the option of Taiwan reunification by force, which is clear to people across the Taiwan Straits. But Taiwan is not sure what will prompt the PLA’s actions while the DPP has been deceiving Taiwanese that the island will stay safe whatever it does.

Taiwan knows so little of the mainland’s Anti-Secession Law. The DPP is already approaching the boundary of the law and leading Taiwan to a wrong direction. The sustainability of the island’s development remains uncertain.

Li’s words have sent a warning to Taiwan and drew a clear red line. If Taiwan attempts to hold an independence referendum or other activities in pursuit of de jure “Taiwan independence,” the PLA will undoubtedly take action.

This is the cornerstone of Beijing’s policy on Taiwan that can’t be shaken and also the will of the entire Chinese nation.

Li’s words are like warning bells on Taiwan authorities considering independence by a salami-slicing strategy. Taiwan is facing what Peking faced in 1949 – being encircled by mainland forces. Any move that oversteps the boundary will be in vain.

China unification continues to lose support among the people of Taiwan

As I’ve been describing for years, Taiwan’s attitudes toward unifying Taiwan with China have been increasingly favoring independence, as younger generations with no memory of the Chinese civil war displace the survivors that war, when they fled Mao Zedong and China’s mainland in 1949 for the island of Formosa, which eventually became part of the current Taiwan.

Taiwan’s current ruling party, the Democratic Progressive Party (DPP), has favored Taiwan’s independence since it became prominent in the 1990s, as a reaction to China’s Tiananmen Square massacre in 1989.

The opposing party is Kuomintang (KMT), which was the party formed by the Chinese who fled Mao for Formosa. They have traditionally favored Taiwan’s unification with China, with the caveat that they consider Taiwan’s to be the legitimate government of all of China.

The name-calling between the DPP and KMT has been pretty harsh over the years, so I was a bit surprised to read the following in a Taipei News news story about the invasion threat:

Meanwhile, Chinese Nationalist Party (KMT) Culture and Communications Committee deputy director-general Hung Meng-kai said that the KMT would not tolerate any threats or finger-pointing aimed at the Republic of China’s [Taiwan’s] homeland or the security of its people.

The DPP administration should face up to the importance of maintaining peaceful cross-strait relations and avoid any unnecessary misunderstandings that could cause irrepressible losses to Taiwan, he added.

I interpret this as a sign that China’s unending stream of belligerent threats aimed at Taiwan is causing the KMT and DPP to move closer together and become more unified in opposing unification with China. This is not the least bit surprising in view of China’s extremely vitriolic attacks on Taiwan’s politicians, especially DPP politicians.

Chinese officials are aware of this trend, and although they pay lip service to “peaceful unification,” everybody is well aware that there will never be peaceful unification. China is biding its time, waiting for the right trigger to justify an invasion. It is possible, though unlikely, that a mere port call would be enough to trigger a major war, though anything is possible. Taipei Times and China Policy Analysis (22-Mar-2016) and The Diplomat