President Donald Trump took office this January with a promise to put America’s interests first in leading the nation.

As what has become a common refrain among his administration goes, however, “America First” does not mean “America Alone.” Trump made that clear this year with trips around the world to strengthen Washington’s ties to its closest allies – and assert Washington’s strength to its rivals.

Below, seven highlights as Trump introduced himself to the world in speeches, bilateral meetings, state dinners, and public appearances meant to lift America’s profile abroad. 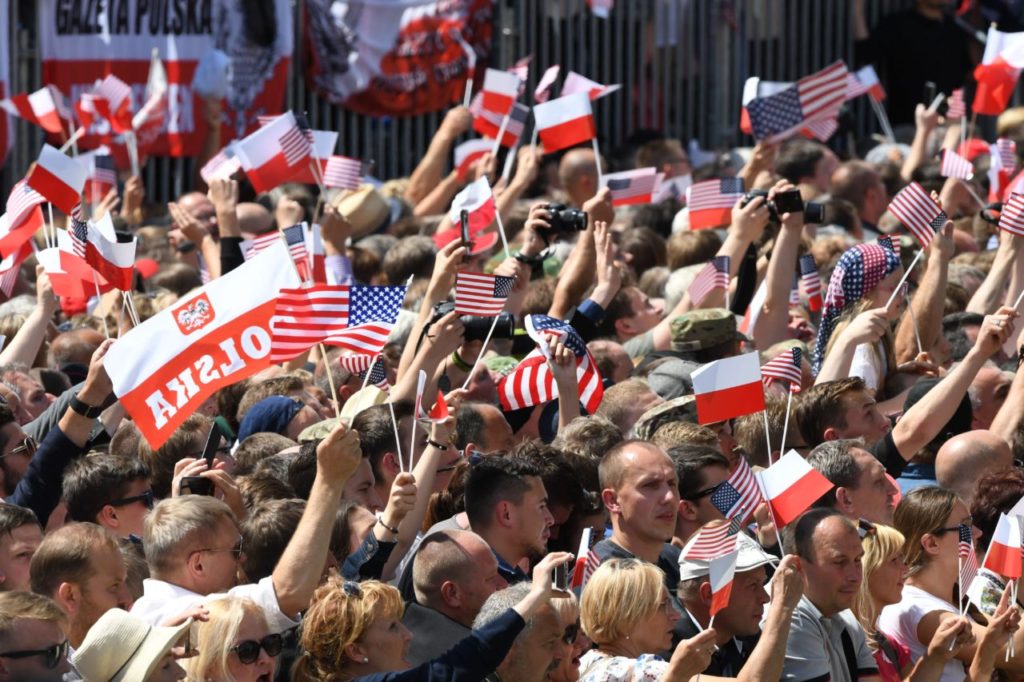 Poland: “Do we have the desire and the courage to preserve our civilization?”

President Trump visited Poland, one of America’s closest allies in Eastern Europe, in July, attracting a crowd of thousands of supporters in the capital, Warsaw, who see the United States as an indispensable ally in keeping Russian aggression at bay. Given its tumultuous history with its Russian neighbor, Polish voters have consistently elected officials that offer to strengthen ties to America and build deeper alliances with the greater West.

“They just love him, the people in Poland — they just really love him,” Law and Justice Party representative Dominik Tarczynski said of Trump as prepared to arrive in the country. The crowds that assembled to hear his speech in Krasiński Square supported Tarczysnki’s claims, waving American flags and holding signs with Trump’s name on them.

In his speech, Trump appealed to his nation’s and Poland’s common embrace of Western culture, calling for a united front against both ideologically and physical threats to a shared civilization.

“The fundamental question of our time is: whether the West has the will to survive,” he argued. “Do we have the confidence in our values to defend them at any cost? Do we have enough respect for our citizens to protect our borders? Do we have the desire and the courage to preserve our civilization in the face of those who would subvert and destroy it?”

China: $250 billion in trade and help with North Korea 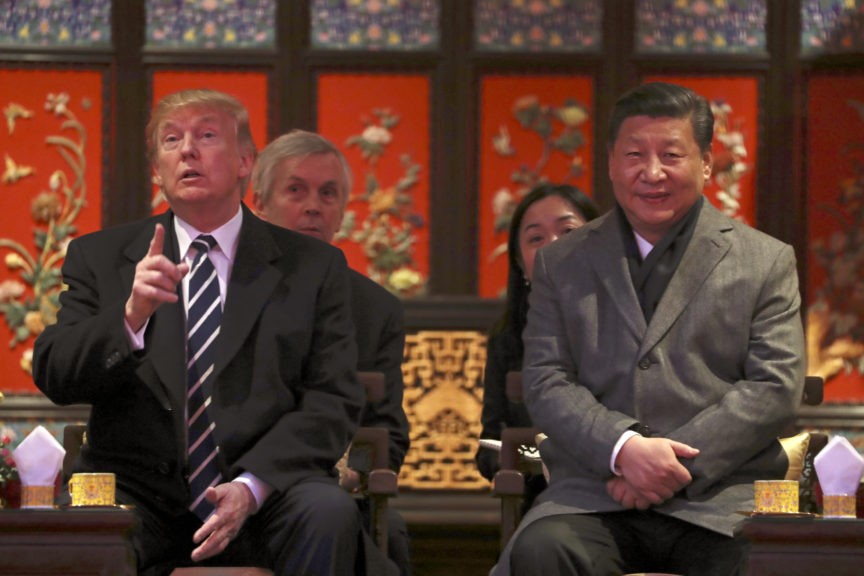 President Trump’s visit to Beijing in November was among the year’s most anticipated foreign engagements. Chinese officials scheduled a variety of historical tours for Trump and First Lady Melania Trump. China’s Communist Party leader, Xi Jinping, and his wife Peng Liyuan gave the Trumps a personal tour of China’s Forbidden City, Melania Trump visited the Great Wall, and the two couples enjoyed a lavish state dinner in honor of the visit.

Trump and Xi also secured over $250 billion in bilateral trade deals. While many criticized Trump for relaxing his typically incendiary rhetoric against China while in the country, no notable changes in policy favorable to China came from the trip. On the contrary, Trump’s newly-released National Security Strategy identifies China as a “strategic competitor” and orders his administration to challenge China a variety of economic and political violations. 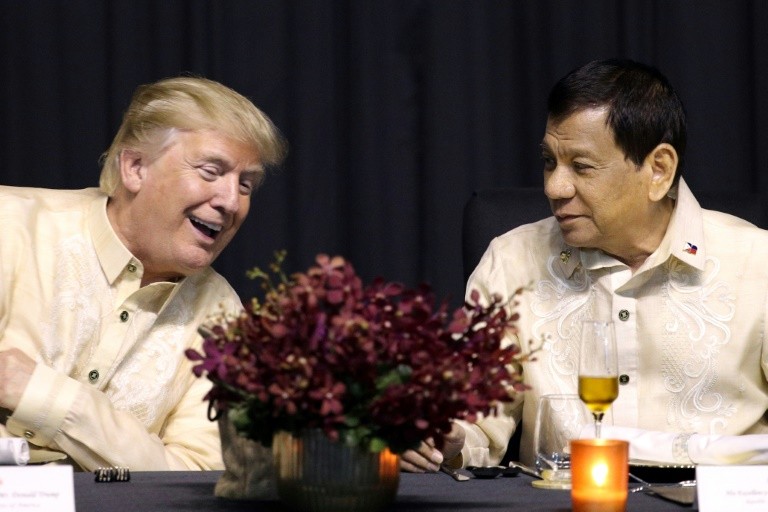 Having been branded “the Donald Trump of the Philippines” for his abrasive style, the nation’s president, Rodrigo Duterte, presented one of the most unpredictable meetings for President Trump. Duterte had referred to his predecessor, Barack Obama, as a “crazy man” and “son of a whore” and repeatedly made references to ending the Philippines’ long-standing cooperation with the United States.

Duterte and Trump appeared to get along extremely well, however, and their meeting was marked by a mutual ease that led to several bizarre lighthearted moments during this visit. During their joint press conference, for example, Duterte joked that the media were “spies,” a remark that elicited some laughs from Trump.

During the state dinner organized by the Philippines for Trump, Duterte did more than tell jokes – he sang. The head of state performed a duet with Philippine singer Pilita Corrales, clarifying upon the song’s conclusion, “I sang an invited duet with Ms. Pilita Corrales upon the orders of the Commander-in-chief of the United States.”

Trump heralded his “great relationship” with the Philippines and thanked Duterte for his hospitality before the trip ended.

Japan: The debut of the ‘Make Alliance Even Greater’ hat 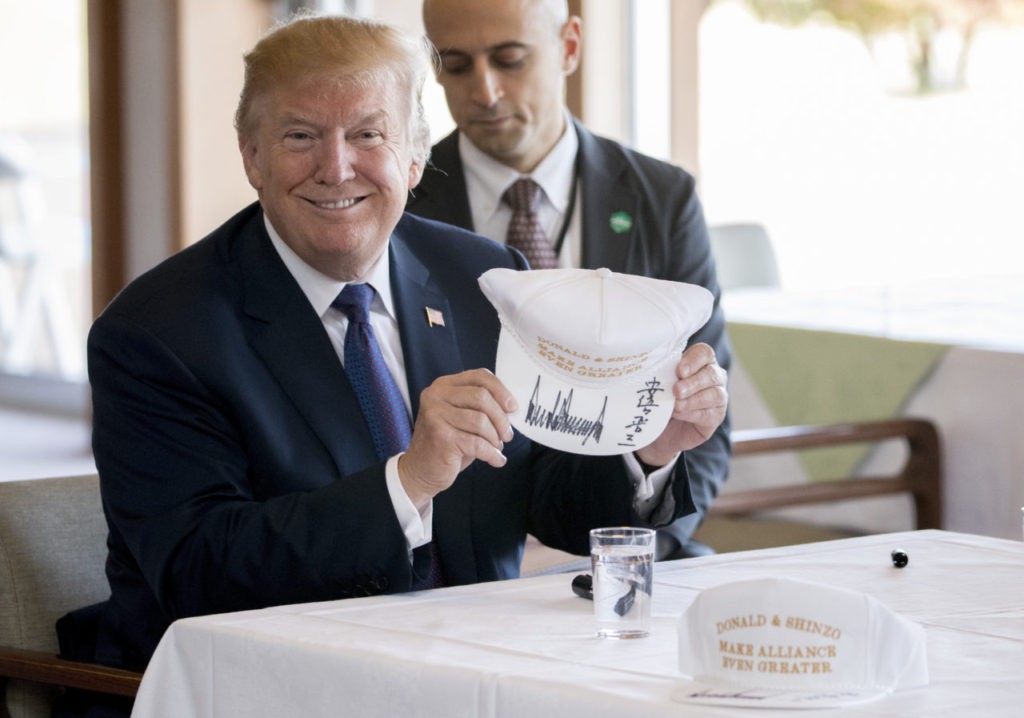 Japanese Prime Minister Shinzo Abe was the first head of government to visit President-elect Trump following the 2016 election. Abe visited the President after his inauguration, as well, cementing the strong, decades-long bond between Washington and Tokyo. In November, Trump got the chance to return the favor in an extensive trip to Asia, where he referred to his relationship with Abe as “really extraordinary.”

The two men shared some time on the golf course – Abe is an avid player and his grandfather, former Prime Minister Nobusuke Kishi, also famously played golf with President Dwight Eisenhower – and held bilateral talks on trade, defense, and other issues of mutual interest. Abe’s tenure as Prime Minister has been defined by his push to improve Japan’s military abilities and rebuild national confidence in a country for which maintaining a standing army remains illegal. Trump has proven very willing to listen to Abe’s arguments and has shown a predisposition for supporting a robust Japan.

In addition to the golf session, Abe gifted Trump token of friendship familiar to anyone following the 2016 election: a white cap reading, instead of “Make America Great Again,” “Donald and Shinzo, Make Alliance Even Greater.”

Saudi Arabia: Calling for an end to jihadist terror in the heart of the Islamic world 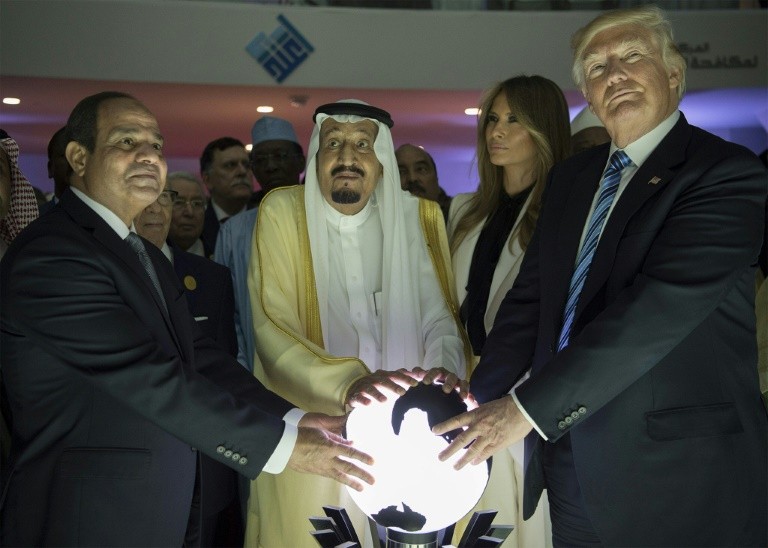 President Trump chose the Middle East for his first trip abroad in May, landing in Riyadh for the establishment of a new international center to combat terrorism – the Global Center for Combating Extremist Ideology – and to deliver a speech against radical Islam in the heart of the Islamic world.

“Our goal is a coalition of nations who share the aim of stamping out extremism and providing our children a hopeful future that does honor to God,” he told his audience in Riyadh, which included King Salman.

“Young Muslim boys and girls should be able to grow up free from fear, safe from violence, and innocent of hatred. And young Muslim men and women should have the chance to build a new era of prosperity for themselves and their peoples,” he added, noting that most victims of jihadist violence are Muslims. “There can be no coexistence with this violence. There can be no tolerating it, no accepting it, no excusing it, and no ignoring it.”

Saudi Arabia’s Foreign Minister Adel al-Jubeir praised Trump, telling reporters that he “deserves a lot of credit” for visiting Saudi Arabia before any other country on earth after his inauguration.

Israel: A ‘big, beautiful difference’ between Trump and Obama 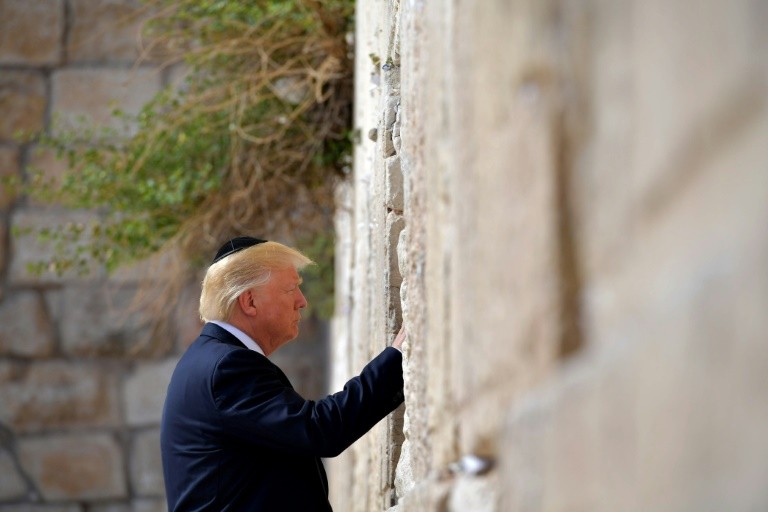 After visiting Saudi Arabia, Trump continued on to Israel, where he toured some of Jerusalem’s holiest sites and reaffirmed America’s commitment to a partnership with the Middle East’s only functioning democracy.

Promising a “big, beautiful difference” between the Obama administration’s and his policies, Trump asserted, “my administration will always stand with Israel.” Of Jerusalem, he said, “Its beauty, splendor and heritage are like no other place on earth. What a heritage, what a heritage. The ties of the Jewish people to this holy land are ancient and eternal. They date back thousands of years, including the reign of Kind David, whose star now flies proudly on Israel’s blue and white flag.”

Since his visit, Trump has acknowledged that Jerusalem is the capital of Israel and begun the process of moving the U.S. embassy out of Tel Aviv and into the capital. 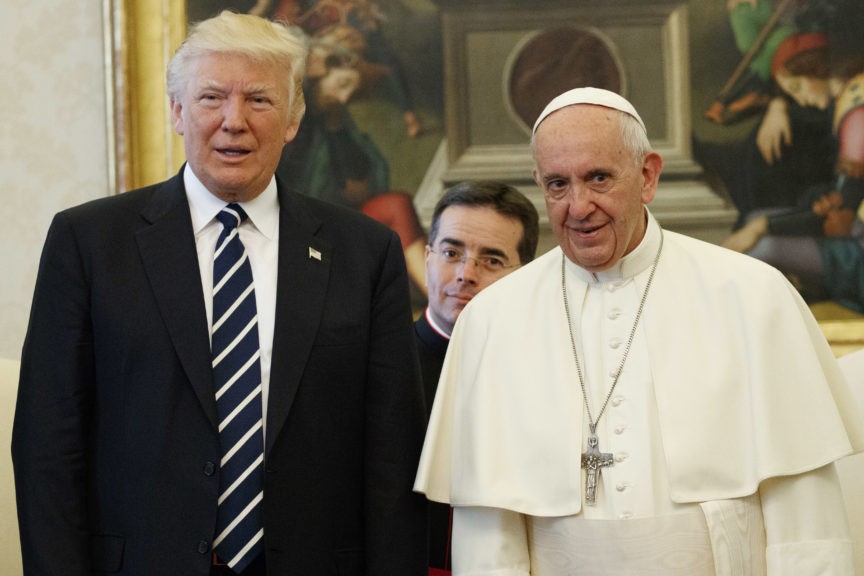 President Trump met Pope Francis at the Vatican in May of this year, following his stops in Saudi Arabia and Israel. The two leaders exchanged gifts – for Trump, a book of the pope’s writings; for Pope Francis, a book of Rev. Martin Luther King, Jr.’s writing – and discussed ways to promote religious freedom around the world.

The two discussed “the protection of Christian communities,” particularly in Muslim-majority and war-torn regions like Syria and North Africa. According to the White House, “the Pope and the President discussed how religious communities can combat human suffering in crisis regions, such as Syria, Libya, and ISIS-controlled territory.”

“The President affirmed that the United States and the Holy See share many fundamental values and seek to engage globally to promote human rights, combat human suffering, and protect religious freedom,” the White House noted.