Thousands of protesters have taken to the streets of Iran over the past few days, speaking out against both the “hardline” government of the ayatollahs and the supposedly “moderate” secular government of President Hassan Rouhani.

“Death to the dictator!” and “Death to Rouhani” are chants heard in at least eight Iranian cities, and the movement appears to be spreading.

The UK Daily Mail reports protesters surrounding an Iranian mullah, a powerful member of the theocratic ruling class, and changing “Mullahs, be ashamed and leave Iran!” in his face.

One of the big protests was held in Mashhad, which is considered one of the holiest sites in Iran and in all of Shia Islam, as it contains the shrine of a revered 9th Century imam.

On Friday afternoon there were reports of protesters filling the streets of Qom, Iran’s spiritual center, and chanting: “We don’t want an Islamic republic!” Another protest chant, “Iran is haphazard without the Shah,” seems calculated to annoy the mullahs and ayatollah. These are remarkable gestures of defiance against Iran and the revolution of 1979, which is officially regarded as a sacred event.

One brave woman expressed her defiance by standing up without a veil or headscarf:

An unveiled woman in Iran stands defiantly at anti-government rally. We must keep the international eyes focused. There have been brutal crackdowns in recent past by state. We cannot let that happen again. RT using #Iranprotests pic.twitter.com/RVfFpbczm0

One of the iconic photos of yesterday's protest was a young woman with her compulsory hejab on a stick…
What a wondrous site. Viva the protesting people of Iran. Long Live! pic.twitter.com/146HPg4Sna

Iran’s military and foreign adventures are a major cause of the protesters’ anger, which is remarkable considering how hard the Iranian government has worked to portray its interventions as sacred causes and military leaders like Quds Force commander Gen. Qassem Soleimani as national heroes.

And yet, the protesters cry “Not Gaza! Not Lebanon! My life for Iran!” and “Leave Syria, think about us!” They are even criticizing the Iranian government’s activism on behalf of the Palestinians.

The initial cause of the protests was reportedly public anger over rising prices for food, a generally high inflation rate, and high unemployment. The governor of Mashhad dismissed the protest in his city as an “illegal No to High Prices gathering” at first.

Rouhani campaigned on economic renewal, including the benefits accruing to Iran from its nuclear deal with the Obama administration, and while progress has certainly been made – Iran’s inflation rate is a little under 10 percent today, compared to about 40 percent when Rouhani took over from his deranged predecessor Mahmoud Ahmadinejad – the crowd appears to be profoundly dissatisfied with the standard of living, and displeased that Iran is funneling so much money into foreign mischief and imperial ambitions instead of meeting the public’s needs at home. Despite Rouhani’s promises, the standard of living for average Iranians has declined about 30 percent over the past ten years.

Corruption and mismanagement of vital resources have also been proposed as reasons for the protest, combined with a debt crisis choking the Iranian banking sector.

Iranian officials, including the governor of Mashhad, gave their police forces much credit for a “tolerant” response at first, but tolerance quickly thinned as the mullahs demanded a stronger crackdown.

Meanwhile, Rouhani allies are floating conspiracy theories that the hardliners are behind the protests, in a bid to weaken Iran’s “secular” government and increase theocratic power. “When a social and political movement is launched on the streets, those who started it will not necessarily be able to control it in the end,” Rouhani ally and Vice-President Eshaq Jahangiri reportedly said.

The Daily Mail has photos of tear gas in the streets: 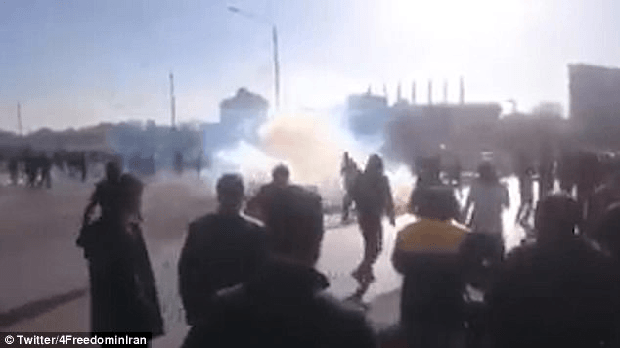 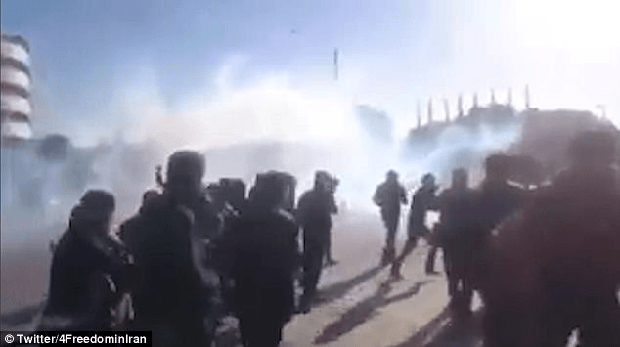 Protesters threw stones as water cannon came out in the city of Kermanshah, according to footage from members of the anti-Ayatollah group the National Council of Resistance in Iran (NCRI):

Angry protesters hurl stones as the #Iran'ian regime's suppressive forces bring in the water cannons. Protest against poverty & the government's mismanagement of the economy today in Kermanshah, via the MEK's social network. Chants of "Bread, Work, Freedom". #FreeIran #No2Rouhani pic.twitter.com/CLBzCApcGq

The protests reached Tehran on Friday as the movement gained support from workers upset by unpaid back wages. The crowd in Tehran was small, estimated at around 50 people. Several arrests were nevertheless reported, perhaps intended as a warning shot against Tehran residents tempted to join in.

A storm of viral videos and photographs is rising on social media. Iranian dissidents are talking about an “uprising” that may be more significant than the “Green Revolution” of 2009, and perhaps more difficult for the government to suppress with violence, especially since some of the demonstrators have indicated a willingness to fight back, or to stand their ground in the face of police and militia action.

Supreme Leader Ayatollah Ali Khamenei’s response to the protests has been uncharacteristically subdued, leading some to sense weakness or cowardice in the face of public demands for accountable government.