New reports show that Taliban are gaining territory in Afghanistan 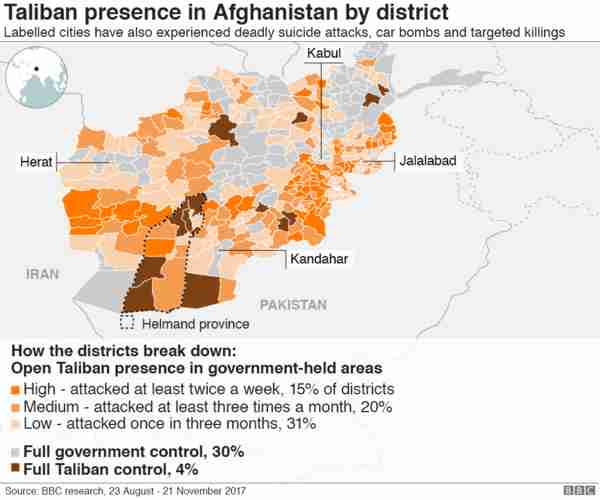 A new study by the BBC, based on interviews with 1200 people across Afghanistan, finds that the Taliban are in full control of 4 percent of Afghanistan’s districts, and have an active and open physical presence in a further 66 percent, significantly higher than previous estimates of Taliban strength. That means that only about 30 percent of the districts are still controlled by the Afghan government. The interviews were conducted late in 2017.

The extent to which the Taliban partially or fully control districts of Afghanistan has been one of the most useful statistics used by analysts and politicians for gauging the success of the Nato coalition in defeating the Taliban.

However, there are indications that the US military is trying to suppress this kind of information. The Quarterly Report To The United States Congress issued by the Special Inspector General for Afghanistan Reconstruction (SIGAR) was released on Tuesday. According to the report, SIGAR has been specifically instructed by the US military not to release this kind of information any more, even though it’s unclassified. According to the report:

A spokesman in Kabul, representing the US-led NATO coalition, denied both reports, saying that the Taliban contested or controlled only 44 percent of the Afghan districts and that SIGAR had not been instructed to withhold unclassified data.

Whatever the actual figure is, no one as far as I know questions the fact that the Taliban have been gaining territory and the Afghan government has been losing territory, ever since most foreign troops left the country in 2014. And this trend is going to continue. BBC and Special Inspector General for Afghanistan Reconstruction (SIGAR) and Reuters

Losing to Taliban has been predicted for years by generational analysis

As I’ve been writing for years, a generational analysis shows there is no chance at all that the Taliban will be defeated in Afghanistan. Journalists, analysts, and politicians are unable to grasp even the simplest generational analysis. Nonetheless, it is worthwhile summarizing what I’ve described in the past.

Afghanistan’s last generational crisis war was the extremely bloody Afghan crisis civil war, 1991-96, which mostly pitted the ethnic Pashtuns, who are Sunni Muslims and later formed the Taliban, versus the Northern Alliance of Tajiks, Hazaras, and Uzbeks in northern Afghanistan. Now, twenty years later, Afghanistan is in a generational Awakening era, and a new young generation of Pashtuns is coming of age, raised on stories their parents told them about the atrocities committed by the Northern Alliance, and they are looking for revenge.

This growing generation of young vengeful Pashtuns cannot be defeated by any conventional or unconventional army. They are capable of forming cells, living off the land, and conducting terror attacks at any time, targeting the government and the ethnic groups in the Northern Alliance.

Afghanistan’s capital city Kabul has been targeted in just the last two weeks by a series of massive terrorist attacks, killing hundreds of people. Furthermore, these attacks have been inside the most well-protected areas of Kabul, indicating that the Taliban terrorists have had help from the inside – undoubtedly provided by other Pashtun youths.

The fact that the Taliban are gaining more and more territory each year is just a reflection of the fact that more and more youngsters in the Pashtun generation are coming of age, and are willing to avenge what they consider to be the atrocities committed against their parents’ generation.

There is no way to stop this. This generation is going to continue growing, while foreign forces increasingly tire of fighting a war that most Westerners don’t even care about.

However, as I have written in the past, the NATO alliance and the US administration appear to have a larger purpose in mind. As war with China and Pakistan approaches, president Trump wants to keep American troops active in Afghanistan and to continue to maintain several American military bases in Afghanistan, including two air bases in Bagram and Kandahar International Airport. These bases will be valuable in any future war with China. Under these circumstances, having troops in Afghanistan is what matters, whether the Taliban are defeated or not. France 24