North Korea reportedly staged the military parade it rescheduled to precede the 2018 Winter Olympics Opening Ceremonies on Thursday, showing off its latest intercontinental ballistic missiles (ICBMs) in an event Korean outlets described as both “massive” and smaller than usual.

Both dictator Kim Jong-un and wife Ri Sol-ju presided over the parade, according to multiple South Korean news sources. The newswire service Yonhap reports that the first couple allowed a variety of high-level officials to join them on the observation podium reserved for them, a tradition that observers tend to use to figure out which officials are closest to Kim and have curried the most favor. Yonhap lists General Political Bureau chief Kim Jong-gak, army chief Ri Myong-su, and high-ranking Workers’ Party official Kim Yo-jong among the closest to the dictator.

Kim Yo-jong, the dictator’s younger sister, will arrive in PyeongChang Friday for the Olympics Opening Ceremony. North Korea has already sent hundreds of athletes, cheerleaders, and representatives to South Korea for the Games. Women appear at the forefront of the North Korean propaganda effort—a potential nod to the international backlash against workplace sexual harassment that launched the “#metoo” movement in the United States; South Korea is experiencing its own wave of sexual harassment news stories.

Leftist South Korean President Moon Jae-in has confirmed that he will meet with Kim Yo-Jong despite American sanctions levied on her for her role in the nation’s long list of gross human rights abuses.

North Korea’s parades typically showcase the latest military technology in its stable. According to the Korea Herald, the highlights of this parade were the Hwasong-14 and Hwasong-15 ICBMs, which North Korea recently tested by shooting them towards Japan. December’s Hwasong-15 test concluded with the missile shooting up and collapsing while attempting to re-enter the atmosphere near the coasts of Japan, a sign the missile is not yet ready to carry a nuclear payload across the Pacific Ocean as Kim routinely threatens.

The Korea Herald estimated 13,000 soldiers marched in the parade. Observers tell Yonhap the parade, reportedly meant to celebrate the anniversary of the founding of the North Korean People’s Army, “reduced in scale” compared to last year. KBS reports the same, while still describing it was a “massive” affair in the heart of Pyongyang. The restrained nature of the parade contrasts somewhat with predictions that Kim intended to “scare the hell out of the Americans” by upstaging the Olympics Opening Ceremony with a parade.

Unnamed South Korean officials told Yonhap that North Korea did not broadcast a live feed of the parade and shorted the program. “The fact that the North did not broadcast the event live … this is a message (from Pyongyang),” one official told the outlet, suggesting the message was a peaceful diplomatic one.

Yonhap published some photos from the event, including of the missile identified as a Hwasong-14: 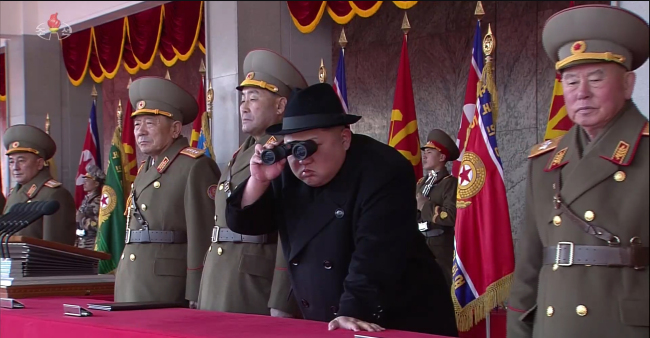 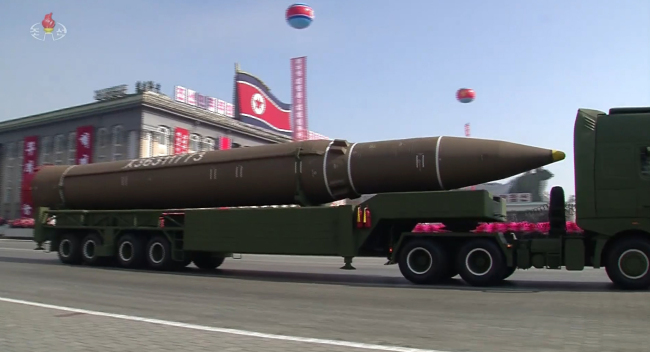 Kim reportedly delivered a speech claiming North Korea is a “world-class military power” and warning, “We will have to prevent aggressors from attempting to infringe or ridicule our dignity and sovereignty even by 0.001 millimeter.”

At press time, the main media outlets of North Korea, the Korean Central News Agency (KCNA) and Rodong Sinmun, observed the anniversary of the military without mentioning or reporting on the parade. KCNA published a compilation of editorials honoring founding dictator Kim Il-Sung and other “peerlessly great men.” Rodong warned Japanese Prime Minister Shinzo Abe that “their cynical ploy to behave mischievously by interfering in the issue of inter-Korean relations would add to their thrice-cursed crimes committed against the Korean people and touch off bitterer anti-Japanese sentiment” (again).

The Olympic Games begin on Friday. North Korea is expected to participate in some capacity in women’s hockey and figure skating.