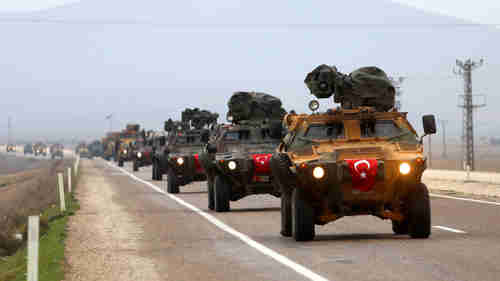 Turkey’s forces suffered heavy losses on Thursday during its “Operation Olive Branch” in Afrin, with the military announcing that eight soldiers were killed and 13 more wounded, making this the deadliest day for Turkey since the Afrin operation began on January 20. Turkey’s defense minister announced that, since the operation began, a total of 41 Turkish soldiers had been killed.

Turkey considers the YPG Kurds to be terrorists because they are linked to the Kurdistan Workers’ Party (PKK). The PKK has perpetrated large terrorist attacks in Turkey in the last two years and has conducted an on-and-off separatist insurgency against Turkey’s government for thirty years. The U.S. and the EU also consider the PKK to be a terrorist organization, though not the entire YPG.

The Kurds have set as a goal the creation of an independent state of Rojava along Syria’s northern border with Turkey. Turkey considers that objective to be an existential threat.

Turkey launched the Afrin operation to thwart a YPG objective to establish the state of Rojava. Turkish troops are backed by an estimated 22,000 “moderate rebels” in the Free Syrian Army (FSA), while the YPG is estimated to have about 8,000 to 10,000 fighters in Afrin. According to Turkey’s defense minister, 116 fighters from the FSA have been killed since the operation began. Turkey also claims that 2,295 “YPG – PKK – ISIS terrorists” have also been killed.

According to reports, the Turkish forces that were killed on Thursday were special forces units that had been recently deployed to Afrin. They had been chosen because of their previous urban warfare experience in fighting the PKK. The YPG fighters ambushed the Turkish forces by hiding out in tunnels, and then emerged from the tunnels for the ambush.

Despite the deaths of Turkish forces, the operation in Afrin appears to have unified the Turkish citizens, at least the citizens who aren’t Kurds. Kemal Kiliçdaroglu, the leader of the main opposition Republican People’s Party (CHP) is fully supporting the operation:

We trust our army, we have no doubt that they will succeed in their mission to fight terror.

We cover the coffins of our martyrs with a Turkish flag. My citizens, let’s hang the Turkish flag on our homes, offices and working places until our martyrs rest in peace.

However, Kiliçdaroglu has previously said that he does not want Turkish troops to enter Afrin’s city center:

I do not approve of an offensive into the center of Afrin because it shouldn’t be about capturing a city. Why did we enter the Afrin district [in the first place]? To eliminate terror organizations on our border.

On Friday, a number of CHP lawmakers went onto their social media accounts and changed their pictures to an image of the Turkish flag. France 24 and Yeni Safak (Ankara) and Hurriyet (Ankara)

Turkey doubles down on Afrin-Manbij operation, despite US opposition

The fact that the operation to take control of Afrin is taking several months instead of several days has the advantage that it has postponed a possible major confrontation for several months, and possibly forever.

Once the Turkish army has taken control of Afrin, the plan is to move farther east and perform the same operation in the town of Manbij. The problem is that there are also U.S. troops around Manbij. The YPG has been the main fighting force to defeat the so-called Islamic State (IS or ISIS or ISIL or Daesh), backed up by weapons, airstrikes, and training by U.S. forces.

Turkey does not distinguish between the YPG, the PKK, and ISIS, considering all of them to be terrorists. According to Turkey’s deputy prime minister Hakan Cavusoglu, the PKK-YPG terror group has committed many war crimes:

The recruitment of children, which is one of the six grave violations identified by the UN resolutions, is just one of the crimes against humanity committed by PKK/YPG.

In mid-February, American Secretary of State Rex Tillerson visited Turkey’s president Recep Tayyip Erdogan, at a time when Turkey was saying that the U.S.-Turkey relationship was at a “critical point.” Erdogan is particularly infuriated by the weapons and support that the US gives to the so-called “YPG-PKK terrorists.” Turkey’s foreign minister said, “Ties with the U.S. are at a very critical point. We will either fix these relations or they will break completely.”

At the time, Tillerson said:

We are keenly aware of the legitimate security concerns of Turkey, our coalition partner and NATO ally. We will continue to be completely transparent with Turkey about our efforts in Syria to defeat ISIS, and we stand by our NATO ally in its counterterrorism efforts.

On Thursday, an unnamed US official reinforced Tillerson’s comment:

We are very careful not to use that word [alliance] for the YPG. We are not using the YPG as an ally of the U.S. Our ally is Turkey and that is something that the Secretary [of State Rex] Tillerson emphasized in his remarks in Ankara. We have a long-term, enduring, historic alliance and partnership with Turkey and that is not going to change.

The U.S. has made it clear from the beginning that our military cooperation with the YPG was a temporary, tactical arrangement aimed entirely at combating [ISIS]. We have made it clear that once ISIS was defeated we would have no plans for an enduring military relationship with the YPG and certainly no plans for an enduring political relationship with the Democratic Union Party [PYD]. That has not changed.

On Friday, Turkey’s Prime Minister Binali Yildirim indicated that Turkey is doubling down on the fight with YPG and that the fight would go beyond Afrin:

This operation based on international law and our legitimate rights will continue to the end. [Giving] any day or date [when it will end] is out of the question here.

[The operation will end after] the complete wiping out and neutralization of terror organizations. Wherever there is terrorism, they will be our target.

Right now, Turkey’s forces appear to be bogged down in Afrin and this could mean that Turkey’s plans to move on to Manbij will never be realized.

The U.S. military says: “We remain committed to fulfilling our promises regarding the YPG presence in Manbij. It is a city with a lot of people and somebody has to provide security there but our intention is that will not be the YPG.”