Portions of Indian-governed Kashmir shut down after deadly clashes 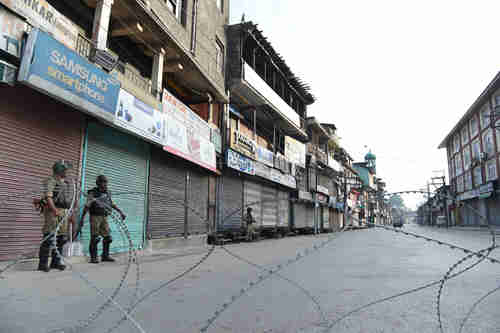 Complete shutdown of portions of Shopian district in Kashmir (PakToday)

Six people were killed – two militants and four civilians – in a shootout that took place at 8 PM Sunday in the Shopian district. According to the army statement, the army responded to firing from the militants by firing back and said that three of the four dead civilians were “overground workers” (OGWs), a term commonly used in Kashmir for non-combatants who provide logistical support for militant groups.

The killings sparked thousands of people to arrive in Shopian to protest, resulting in stone-throwing clashes with the police, although there were no more deaths. The protesters were particularly infuriated by the “overground workers” characterization of the civilians, who they claim were innocent bystanders.

Most violent clashes in Kashmir occur during the hot summer months. Kashmir has been relatively quiet for the last few months, as protests have been minimized by the bitter winter cold. Even so, according to an estimate, 45 people including 15 security personnel, 19 militants, and 10 civilians have lost their lives since January. With an estimated 200 or more active militants in Kashmir, it is expected that the will be a new surge of violence as summer again approaches. Kashmir Reader and Scroll (India) and Kashmir Observer and Ary News TV (Pakistan)

As we have written in the past, there are three major Pakistan-sponsored jihadist groups operating in Kashmir, and recent events indicate that the relative importance of the three is shifting.

The oldest is Lashkar-e-Toiba (LeT), a Pakistan-based terrorist group that was formed in the 1990s by Pakistan’s Inter-Services Intelligence (ISI) agency to fight India in the disputed regions of Kashmir and Jammu. LeT was the perpetrator of the horrific “26/11” three-day attack on Mumbai in 2008, killing 166 people and wounding hundreds more. ( “After Mumbai’s ’26/11′ nightmare finally ends, India – Pakistan relations face crisis” from 2008)

According to a report by Indian police, LeT is reducing its operations in Kashmir, because its leader, Hafiz Saeed, is coming under international scrutiny. Hafiz Saeed masterminded the 2008 Mumbai attack. Pakistan held him under house arrest for several years but refused to bring him to trial. Then, in November of last year, Pakistan freed him with no trial and all charges dropped. As he left the court a free man, he was greeted by chanting crowds and rose petals.

The result, according to the police report, is “increased and repeated international scrutiny of LeT and its chief, [and the] recent development of Pakistan declaring Hafiz Saeed a terrorist under global pressure.”

The second Kashmir jihadist group is the indigenous Hizbul Mujahedeen (HM), a Kashmir-based terrorist group that has been leading the anti-Indian stone-throwing riots of the past two years, triggered by the July 8 2016 death of HM leader Burhan Wani in a gunfight with the Indian army. However, HM has been less effective recently because it has essentially been decapitated, with two of its leaders killed.

The third jihadist group is Pakistan-sponsored Jaish-e-Mohammad (JeM). JeM had little or no presence in Kashmir in 2016, but it has been the main perpetrator of terrorist attacks lately, with four terrorist attacks in the last eight months. JeM has been successful in recruiting young Kashmiris and using them for suicide missions, making JeM the current leader in Pakistan-sponsored Kashmir carnage. Indian Express and India.com and LiveMint (India, 9-Oct-2017)