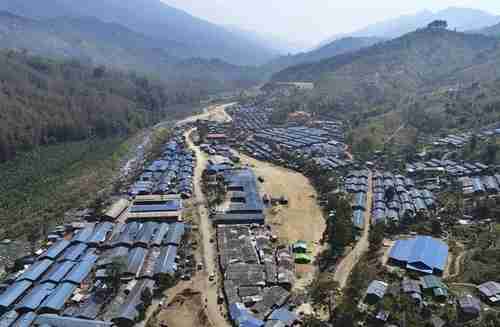 Some 4,000 ethnic Kachins have been driven from their homes in the last three weeks by an escalating conflict between Burma’s (Myanmar’s) army and the separatist Kachin Independence Army (KIA), and are now sheltering in makeshift shelters in the jungle around nearby villages. An additional 15,000 people have fled their homes since the beginning of the year.

There has been a longstanding low-level conflict between Burma’s army and the KIA for several decades, but conflict has severely escalated since the beginning of this year. The conflict is expected to worsen, as reports indicate that the army is deploying reinforcements, including 2,000 infantry troops, fighter aircraft and helicopters.

However, the additional reinforcements that the army is deploying were probably taken from the troops assigned to the ethnic cleansing activities in Rakhine State, indicating that Burma’s government now considers the Kachin insurgency to be of an increasing priority. Democratic Voice of Burma and BBC and AFP and Deutsche Welle

In 2007, I wrote the article “Burma: Growing demonstrations by the ’88 Generation’ raise fears of new slaughter,” describing anti-government riots and demonstrations by Buddhist monks. Many people feared a full-scale civil war, but as I wrote at the time, that would not happen because only 49 years had passed since the end of the previous crisis civil war. In the “Brief generational history of Burma” that I included with that article, I described Burma’s last generational crisis war, 1948-58, as a civil war among ethnic groups, with intervention by the Chinese, with a war climax in 1958 when the army took over power, and turned power over to a civilian government.

I wrote at that time that a new crisis war would not occur at that time, but would probably occur within ten years or so, as the survivors of the previous crisis war disappear.

Well, ten years have passed, and it appears that Burma is entering a new full-scale crisis civil war, with ethnic cleansing of the Rohingyas occurring in one place, and an escalating fight with ethnic groups in the north.

The tipping point into this new generational crisis war (or the “regeneracy,” using the technical term from generational theory) seems to have occurred in November 2016, when the Kachin Independence Army (KIA) joined together with the militant wings of other ethnic groups in northern Burma to form the Northern Alliance, whose members will fight Burma’s army together.

These represent the ethnic groups that fought in the civil war that climaxed in 1958, and 58 years later in 2016 (right on schedule according to generational theory), they apparently joined together to form the Northern Alliance and fight a new civil war. Reuters (21-Nov-2016) and Time (9-Mar-2017) and The Irrawaddy and Foreign Policy