“This is unprecedented to have a Senate majority leader and a Cabinet officer in a federal government position to have a family that is this closely tied to a foreign rival,” Schweizer said.

In a Monday article for Breitbart News, Schweizer revealed details of the latest business deal involved the family of McConnell’s wife, Trump’s Transportation Secretary Elaine Chao. “They bought ten massive ships from the Chinese government since Elaine Chao became our transportation secretary. This would appear to be a conflict of interest,” said Mansour.

Schweizer explained in his article article:

Foremost Group, which is owned by Sec. Elaine Chao’s father and Sen. McConnell’s father-in-law James S.C. Chao, signed contracts with a subsidiary of the state-owned China State Shipbuilding Corporation (CSSC) for four bulk cargo ships in June and September 2017. In December 2017, Chao’s company signed another contract with state-owned CSSC at Foremost’s New York office for two massive 210,000-ton ships. James S.C. Chao and two of Elaine’s sisters were in attendance. So, too, was the Consul General of China in New York, as well as representatives from the CSSC. The financial terms of the agreement were not disclosed.

Then on January 31, 2018, Foremost Group ordered four more 210,000-ton ships from CSSC. Angela Chao, sister to Sec. Elaine Chao and Foremost’s Deputy Chairman, said she expects cooperation between the two entities to extend into the future. In January 2017, Angela Chao joined the board of the state-owned Bank of China.

“We don’t really know any of the terms related to these vessels, other than the fact that they announced them, and that these ten ships will increase the fleet of the Chao family’s shipping company by 50 percent,” Schweizer continued. 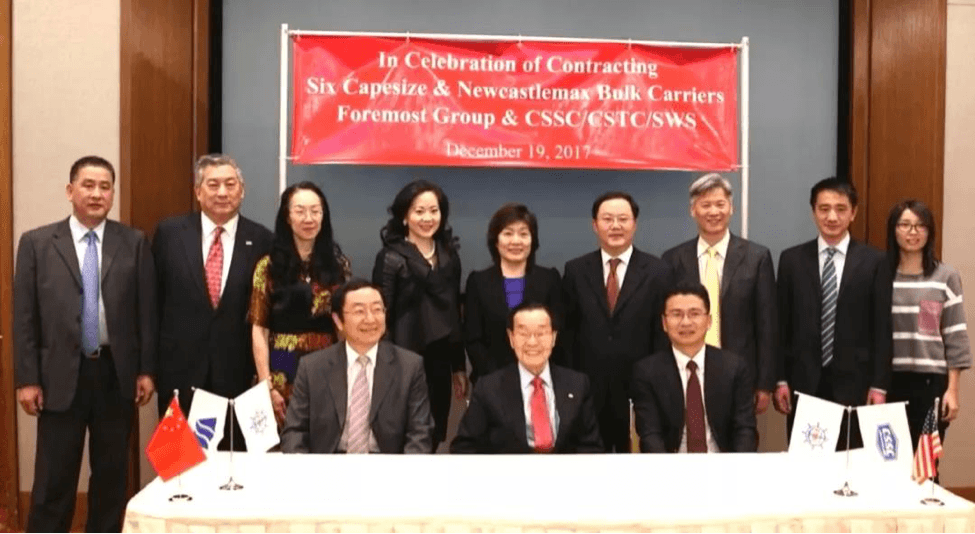 “This is a major expansion of the company. This company goes back decades, but it’s during the first year of the Trump administration with Elaine as the transportation secretary that the Chinese government has decided to do this deal with the Chao family. Of course, that raises all kinds of questions about the financial ties between the McConnell-Chao family and the Chinese government, and what that might mean for policies or potential votes that might take place in the U.S. Senate,” he said.

Schweizer cited the globalist belief that robust trade brings countries closer together politically, and said that lofty principle applies in a much less healthy fashion to political elites as well.

“In the case of Mitch McConnell, that is absolutely true,” he charged. “He came into the U.S. Senate in the 1980s from Kentucky. We had, of course, the Tiananmen Square massacre that took place. Mitch McConnell was probably the most critical U.S. senator on China in the midst of that massive human rights violation.”

“And yet, in 1993 his family began very lucrative ties with the Chinese government. In December of 1993 he traveled to Beijing, China with his father-in-law – that would be Elaine Chao’s father James Chao – as guests of the China State Shipbuilding Corporation. As the name implies, that is a company owned by the Chinese government. They are, in fact, one of the biggest military contractors in China,” he noted.

Schweizer said the Chao’s shipping business grew so rapidly after the 1993 deal that by 2008, the Chao family was able to gift their son-in-law Mitch McConnell with a sum of between $5 and $25 million, which “massively increased his net worth overnight.”

“He benefits when the Chao family does well financially. It helps his bottom line,” Schweizer emphasized.

He contended that a review of McConnell’s voting record on China over the past 25 years reveals “he has become increasingly less hostile to Beijing.”

“This growing economic dependence between McConnell’s family and the Chinese government has served to, in a sense, encourage him to be far less critical of China,” he said. “Whatever the issue – the South China Sea, currency manipulation, trade issues – he is far more pliable to Chinese interests than he was five, ten, fifteen, twenty years ago. I think it has everything to do with the fact that he recognizes and knows that the Chinese government is making his family very wealthy.”

Schweizer warned that deep financial ties between the American political class and Beijing are particularly dangerous at a time when our national security apparatus has identified Communist China as the greatest long-term threat faced by the United States.

“It gets even worse because James Chao – that would be Elaine Chao’s father – and her sister Angela Chao a couple of years ago served on the board of directors of a Chinese company called CSSC Holdings. ‘CSSC’ stands for China State Shipbuilding Corporation. This is the financial arm of one of the largest military contractors in Beijing,” he said.

“When the Pentagon talks about the fact that China is a rising military power, they are talking about, in part, the China State Shipbuilding Corporation,” he elaborated. “They build a lot of the navy ships that the Chinese navy is building to challenge U.S. naval supremacy. According to current projections by the Naval Academy and other outlets, they believe by 2030 if current trends continue that the Chinese navy will surpass the U.S. Navy as the preeminent naval power. A central player in that is the China State Shipbuilding Corporation, of which Elaine Chao’s sister and father served on the board of directors.”

Schweizer also referenced China’s massive “One Belt, One Road” infrastructure project, which stretches across the developing world and includes naval facilities, roads, and other resources of interest to the Chinese military. Both the Obama and Trump administrations agree that One Belt, One Road represents a “geostrategic challenge to the United States and the Western allies.”

“Elaine Chao’s sister Angela Chao has been on record saying One Belt, One Road is a wonderful thing,” he noted. “That yes, it’s going to be good for China, but it’s also going to be good for the developing world. She explicitly says, ‘I want to be part of seeing this be a successful Chinese initiative.’”

“The problems don’t begin and end with the financial ties to the shipbuilding corporation. It goes far deeper than that. This is a very serious challenge to our strategic balance with the Chinese government,” he cautioned.

Schweizer pointed out that McConnell has not attempted to refute the facts of his family’s commercial ties to the Chinese government, but instead insisted those ties will not influence his votes in the Senate.

“My response is just, give me a break,” he sighed. “The Chinese government has been very explicit about this, that they believe the way they can deal with the American challenge to their strategic goals and plans is basically by buying off our political class. They’re doing that with Mitch McConnell. As I highlight in the book, they also did this in the Obama administration with Joe Biden’s family.”

“There have been reports in Canada, the head of the Canadian intelligence service issued a statement a couple of years ago that Canadian members of parliament and their families were being offered sweetheart deals by the Chinese government,” he continued. “There are growing scandals in Australia, in New Zealand relating to political parties and politicians who had financial ties to the Chinese government that were exposed.”

“There is no debate. This is their strategy. And there is also no debate that they look to supplant the United States as the major world economic, political, and military power. That is not subject to dispute. The question is, are we going to be aware of it, and are going to actually do something about it?” Schweizer contended.

“The problem is, when you have political figures in the United States, of whatever party, who are financially beholden to the Chinese government, they are not going to represent their constituents back home, because their ultimate constituents are these foreign entities – in this case, China,” he lamented.

Schweizer called on McConnell to “come clean and be honest about the financial ties that exist, and the fact that they are vulnerable to the Chinese government deciding tomorrow to shut down their business if they want to, if they’re unhappy with anything that Mitch McConnell does.”

According to Schweizer, the Chinese were “freaked out” by President Donald Trump’s unexpected victory in the 2016 presidential election.

“Trump has been talking about China for the last three decades – issues of the trade deficit, military expansion, you name it, Trump has talked about it,” he observed. “Whether one agrees with Trump or not, there is no question that he views China as a rival power.”

“China saw that immediately, so when Donald Trump won, they basically decided on two things. Number One, that they needed to cozy up further to the powers-that-be in Washington, DC,” he said.

“Ten days after Donald Trump won his election, what did the Chinese government decide to do? They decided to appoint Elaine Chao’s sister Angela Chao to the board of directors of the government-owned Bank of China,” he recalled, noting that Angela Chao is “the first foreign national other than a Dutch banker to serve in that position.”

Number Two on China’s post-election agenda was getting Trump to weaken his positions on China, which Schweizer said was accomplished by offering “sweetheart deals to his kids.”

“I don’t have any evidence that any of those deals have taken place,” he disclaimed. “I have no doubt that they’ve been offered. What I’ve counseled is, don’t take those deals. Those deals are going to come with strings attached, and they are going to do it to weaken the United States.”

Schweizer complained that current disclosure rules for foreign business connections fall short of the transparency standard Americans should demand from their political leaders.

“If you look at Mitch McConnell’s financial disclosure form in the U.S. Senate, there is no mention of any of the cheap deals with the Chinese government,” he pointed out. “They purposely do these deals through family members, parents or siblings or adult children, because they don’t have to disclose those kinds of transactions.”

“We need to demand that they disclose these transactions,” he urged. “We need to demand that they end these kinds of financial relationships, because look, we’re not stupid. We recognize that if these are making our political leaders rich, whether they’re Democrats or Republicans, they are going to get access and they are going to hold sway with our political leaders.”

“We want our leaders attuned to American interests, not to Chinese interests. As long as these lucrative ties exist, we cannot be guaranteed at all that they aren’t more interested in pleasing those making them rich in Beijing than pleasing those that are in their home districts that are putting them in office,” Schweizer declared.

Mansour asked if there is any precedent for a powerful politician such as Senate Majority Leader McConnell having such deep financial ties with a foreign power identified as a top strategic adversary by the Pentagon and White House.

“None,” Schweizer replied. “This is unprecedented. This did not exist during the Cold War. It didn’t exist during World War 2. I don’t know any examples from the 19th Century. This is unprecedented, to have a Senate majority leader and a Cabinet officer in a federal government position, to have a family that is this closely tied to a foreign rival.”

“If we bury our head in the sand and pretend it’s not happening, we’re only going to make the situation worse,” Schweizer warned. “We need to compete with China in a way in which we know that our leaders are interested in our best interests, not in their best interests – especially when their best interests align with a foreign government, as they seem to in this case.”