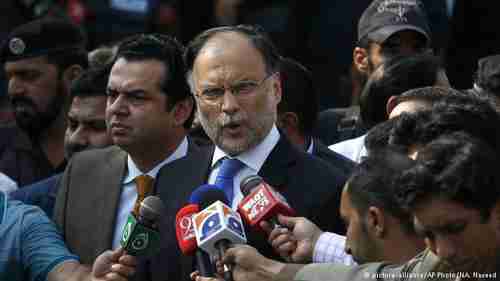 Pakistan’s interior minister Ahsan Iqbal was shot in the arm in an assassination attempt as he spoke at a public meeting on Sunday. The gunman was about to fire a second shot when he was overpowered by people around him. It’s believed that Iqbal will survive.

The gunman was Abid Hussain, 21, affiliated with the ultra-religious Tehreek-e-Labaik party, which is the political party of the loony Barelvi sect that believes that anyone accused of blasphemy should be executed.

This was not the first physical attack on Iqbal this year. A man threw a shoe at him while he was addressing a workers convention in February. Iqbal wasn’t hurt and refused to press charges, so the police never investigated the motive of the perpetrator, or whether he was also a member of Tehreek-e-Labaik. (One media source claims that shoe-throwing as a form of insult is practiced in many countries, and is mentioned in the Bible in Psalms 108:9.)

The usual questions are being asked about why security at Sunday’s event was so lax that a gunman was able to get into the event. The reason being given is that the levels of terrorist violence in Pakistan have been decreasing in the last two years, and so less security is being used at events like this.

Federal elections will be held this summer, and the number of political rallies will be increasing substantially. Sunday’s assassination attempt is raising concerns that there may be additional terrorist attacks at this rallies as the election approaches. Express Tribune (Pakistan) and Reuters and Pakistan Today (24-Feb) and Bible Study Tools

In January 2011, Salman Taseer, the governor of Pakistan’s Punjab province, was shot and killed in broad daylight on an Islamabad street by Malik Mumtaz Qadri, a member of the “Elite Force” of bodyguards that were supposed to protect him. Taseer was shot 27 times in the back. Qadri confessed to the killing, and blamed it on Taseer’s opposition to Pakistan’s blasphemy law, which forbids blaspheming Mohammed or Islam. When Qadri arrived in court a few days later, Islamist lawyers showed him with roses.

Allama Khadim Hussain Rizvi, the head of the Barelvi sect, was unknown in Pakistan until he became Qadri’s principal defender after the Taseer assassination. Rizvi also became the principal defender of the blasphemy law that Taseer had wanted to change, and organized public support for the law.

The text of the blasphemy law, section 295-C of the Pakistan Penal Code, is as follows:

Whoever by words, either spoken or written, or by visible representation or by any imputation, innuendo, or insinuation, directly or indirectly, defiles the sacred name of the Holy Prophet Muhammad (peace be upon him) shall be punished with death, or imprisonment for life, and shall also be liable to fine.

This loony law has been massively abused in Pakistan. In Pakistan, if you want to kill your neighbor, make up some reason why he violated the blasphemy law, and then kill him, and you’ll probably get away with it.

Rizvi’s aggressive support for the blasphemy law has made his Barelvi sect increasingly popular, and he was able to exhibit his power forcefully in October of last year. The government made a minor textual change to a government oath, and a mob of people belonging to the ehreek-e-Labbaik Ya Rasool Allah of Pakistan (TLYR or TLYRAP) political party, coming from the Barelvi sect, were able to paralyze multiple cities across Pakistan, with major roads blocked by a mobs of tens of thousands of Islamists in sit-ins, escalating into clashes with thousands of police.

After weeks of paralysis, the Barelvi TYRAP party scored an enormous victory by forcing the government to completely capitulate to their demands. These demands included resignations of top government officials who made the text change, or who might have known about it.

Barelvi TYRAP party has been gaining in popularity, and elections will be held this summer. Sunday’s attempted assassination has raised concerns that Pakistan’s loony blasphemy laws will be used to incite move violence, as well as to create a popular movement. The Nation (Pakistan, 18-Nov-2017) and Eurasia Review and The Nation (Pakistan, 18-Nov-2017)