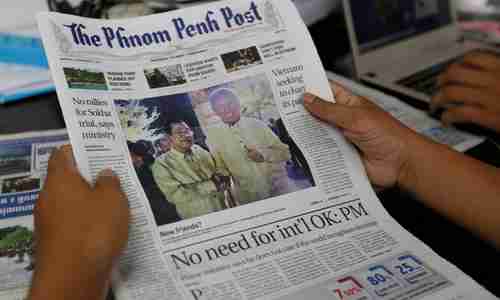 Cambodia’s last independent newspaper, the Phnom Penh Post, is in crisis after the editor-in-chief was fired for refusing to take down an article critical of the new owner. Several senior reporters subsequently resigned after being ordered to take down the same article.

Hun Sen, Cambodia’s leader for 33 years, has become increasingly dictatorial since the opposition political party, the Cambodia National Rescue Party (CNRP), almost won the 2013 election and has become increasingly popular since then. With another election scheduled for July of this year, Hun Sen has solved the problem by arresting CNRP leaders and jailing them on phony charges, and even getting the Supreme Court to declare the CNRP to be an illegal political party. In addition, Hun Sen has been jailing protesters and shutting down media sources not controlled by the government.

The weekend sale of the Phnom Penh Post is the latest example of Hun Sen’s dictatorial takeover. The Cambodian government forced the previous owner to sell by imposing an enormous $3.9 million tax bill on the paper. The only other independent newspaper in the country, the Cambodian Daily, was forced to shut down last year after receiving a $6.3 million tax bill.

An announcement on Saturday said that the Phnom Penh Post had been sold to a Malaysian investor, Sivakumar Ganapathy, executive director of the Malaysia firm Asia PR.

Sivakumar’s first act as owner was to issue a statement saying that the newspaper would remain independent.

Sivakumar’s next act as owner was to demand that the editor-in-chief take down an article posted on Sunday detailing the sale and Sivakumar’s background, and then fire him for refusing.

Then Sivakumar fired the editor-in-chief and, when he demanded of the other senior editors to take the article down, there was a mass resignation.

As of Monday evening ET, the article still has not been taken down, and I was still able to access it. (Perhaps after all the senior reporters left, there was no one left with a password to the servers.)

The article described numerous examples of Sivakumar’s close relationships with Hun Sen and the Cambodian government, suggesting that Sivakumar might be controlled by Hun Sen. AFP and Phnom Penh Post (6-May) and Australian Broadcasting and BBC

Phnom Penh Post had a combative relationship with Hun Sen

As an example of other articles that might have triggered Hun Sen’s decision to make sure that the Phnom Penh Post would become government-controlled, an article last week described Hun Sen’s “catch and release policy.” The way it works is that opposition figures are arrested on phony charges, kept in jail for as many months or years as necessary, and then released just in time to achieve some objective.

For example, an opposition politician Bun Chhay was jailed on August 4 of last year, supposedly on some decade-old drug charges, but just when it appeared he would pose a legitimate political challenge. Then on September 3, Sourn Serey Ratha, head of the tiny Khmer Power Party, was arrested over a Facebook post criticizing the government’s recent military stand-off with Laos.

This cleared away the only viable competitors to Hun Sen’s reelection, but the arrests caused an international uproar, with threats by the US and the EU to withdraw aid. According to the Phnom Penh Post article, the “catch and release” strategy was completed last week:

Last week, the EU publicly acknowledged that it would be taking the extraordinary step of sending a team to review its General Scheme of Preferences with Cambodia – raising questions about the future of tariff-free access to one Cambodia’s largest trading partners. The pressure was reaching a head.

“While it would seem that the [Cambodian People’s Party] has the upcoming election neatly sewed up, perhaps Hun Sen views him as a figure who can help diversify the electoral field just enough to gain some international credibility, while remaining too marginal to pose any real threat to the CPP’s power,” Strangio said.

Whether the EU will be fooled by this remains to be seen.

However, placing new sanctions on Cambodia will likely not have much effect. Cambodia is becoming China’s most important political ally in the region. Already, between 2011 and 2015 Chinese firms funneled nearly $5 billion in loans and investment to Cambodia, mostly for major infrastructure projects, while making no demands on how Hun Sen runs the country. Like Pakistan, Cambodia is expected to be an obedient ally of China, and to follow China’s policy directives in return for money. Phnom Penh Post (2-May) and Reuters and Reporters Without Borders and Nikkei Asia Review and The Diplomat (15-Jan)