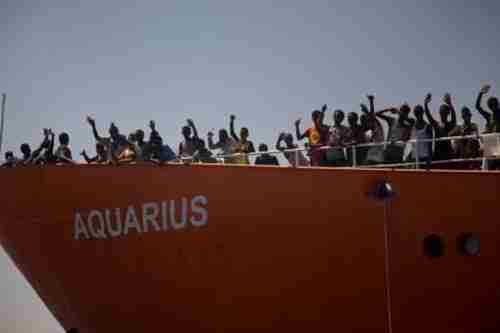 Migrants on the Aquarius (AP)

Spain’s new prime minister, Pedro Sánchez, offered to take in 629 migrants who are on board the rescue ship Aquarius, as we described early last week, after both Italy and Malta refused to allow the vessel to dock in their ports.

That was after Italy’s new interior minister, Matteo Salvini, had refused to allow the Aquarius to dock at an Italian port to allow the migrants to disembark, which had been the practice for several years.

The NGOs SOS Méditerranée and Médecins Sans Frontières (MSF, Doctors Without Borders) were concerned that if the Aquarius had to stay at sea for three or four more days to travel an additional 1,300 km to reach Spain, then the delay would be dangerous to the migrants, many of whom were ill and had come close to drowning when their rubber dinghies sank before the migrants were rescued by the Aquarius.

Nonetheless, the Aquarius began its journey to Valencia, Spain. To relieve the suffering on the Aquarius, Maltese and Italian navy ships resupplied the Aquarius with bottles of water, food packages and clothing for the 1,300km voyage. Furthermore, in an ironic twist, two Italian naval and coastguard vessels took on board 400 of the 629 migrants to relieve overcrowding, and now all three boats are expected to arrive in Valencia on Sunday.

Pope Francis had condemned Italy’s decision to block the ship from port, denouncing acts that make the Mediterranean into “an anonymous grave.” According to the Pope:

The Aquarius, has been like a slap that has shaken our consciences and has put us on our feet to attend to those who knock at the door of the heart and the collective conscience of peoples and nations. And they call upon people of good will, and above all they call upon the humanitarian and Christian conscience.

This is the path, don’t ever abandon it: that of charity; remain steady in charity, in the good example, in the light and the good taste of charity and works of charity. The pope is with you, with the diocese of Valencia.

After the migrants dock in Valencia, they will receive assistance and, eventually, be distributed across Spain.

In addition to the Aquarius, Spain’s own vessels are rescuing hundreds of migrants in the Mediterranean. Spain’s coast guard rescued 933 migrants and found four dead bodies in the Mediterranean Friday and Saturday. The rescues were from dozens of small dinghies in the Gibraltar strait, and in the Alboran Sea, between northeastern Morocco and southeastern Spain.

Spain’s new Socialist government, led by prime minister Pedro Sánchez, has taken up the cause of the migrants’ plight to demonstrate its commitment to protecting human rights and respecting international law. He can take that position when only a few hundred migrants are involved, but he may have to change his mind if there are tens or hundreds of thousands. Reuters and Crux Now and AP and Reuters

Italy’s migration policy opens up battle lines within the EU

Italy no longer wants to be an accomplice of human traffickers and contribute to the business of illegal immigration.

He said that in the course of blocking two additional NGO-operated ships flying Dutch flags, the Lifeline and Seefuchs. An NGO worker on one of the vessels posted a tweet referring to Salvini as a “fascist,” though the tweet was taken down soon after. Salvini responded, “As a father and as a minister, they can attack and threaten me all they want, but I won’t give up and I’m doing it for everybody’s sake.”

In fact, a recent poll shows that Salvini’s anti-immigration policy is extremely popular, with 59 percent of Italians favoring it.

Furthermore, Italy’s policies are achieving their goals, in that the number of people leaving Libya for Italy, 22,000 so far this year, is down an enormous 70 percent from the same period last year. The number that actually reaches Italy is down even further, because Libya’s coast guard is also performing rescue missions, and returning the migrants they rescue to Libyan soil, where they are put into brutal detention centers.

This is the result of an EU policy adopted last year, led by Italy’s government, to revive Libya’s coast guard. The Libyan coast guard had fallen into disrepair after the death in 2011 of dictator Muammar Gaddafi. But Italy has worked with officials in Libya to allow the Libyan coast guard to perform a large portion of the sea rescues.

The result is that among the nine most prominent NGO rescue organizations, three have stopped or suspended their operations over the past year. A spokesman for the Aquarius says, “We will not enter into a battle with the Libyan coast guard, where people are armed.” Instead, the Aquarius will stay on the horizon, watching from several miles away. “We had this situation several times, where we had to look completely helpless.”

There are basic Generational Dynamics principles at work here. As I have written many times, it is a core principle of Generational Dynamics that, even in a dictatorship, major decisions are made by masses of people, by generations of people. The attitudes of politicians are irrelevant, except insofar as they represent the attitudes of the people.

So in the current situation, it is not Matteo Salvini who is making the decisions to adopt anti-immigrant policies. Salvini’s policies have a 59 percent approval rating, and it’s doubtful that he could implement any of them if their approval rating were only 30 percent. It is the people of Italy who are deciding these policies, first by electing MPs from Salvini’s party, and then by approving of his policies.

Most people, even the most hard-hearted Scrooges, would say that they would like to see migrants, especially women and children, sheltered and fed, provided that it did not cost anything. But the irony is that the humanitarian system that protects migrants, and feeds and shelters them, can get overwhelmed, and the costs become overwhelming as well, and that’s the reason why voters turn against that humanitarian system. As Karl Marx might say, the humanitarian system contains the seeds of its own destruction.

The issue of migration is dealing one blow after another to the unity of the European Union. A lot of the motivation for Britain’s affirmative vote on the Brexit referendum was to keep migrants out – although I always like to point out many of the migrants that the British wish to keep out are not Muslims but are Christians from Eastern Europe, just as many Americans wish to keep out Christians from Latin America. Migration is far from being just a religious issue.

Germany’s Angela Merkel has been widely condemned for her decision, in 2015, to encourage Syrian refugees to come to Germany. Her decision was based on the founding principles of the European Union and the 1957 Treaty of Rome where, having suffered the devastation of two world wars and fearing a third, the European survivors saw as a major cause of those world wars the same nationalism and xenophobia that’s increasingly prevalent today.

Merkel’s government may not survive the next two weeks. Merkel is now facing an open revolt from her own interior minister, Horst Seehofer. Seehofer wants Germany to adopt a policy to unilaterally to send back migrants who have registered in other European Union countries, which would amount to a rejection of all migrants into Germany. However, Merkel is standing her ground, saying, “This is a European challenge that also needs a European solution. And I view this issue as decisive for keeping Europe together.” The MPs may not agree. Politico (EU) and Guardian (London) and Washington Post and Reuters