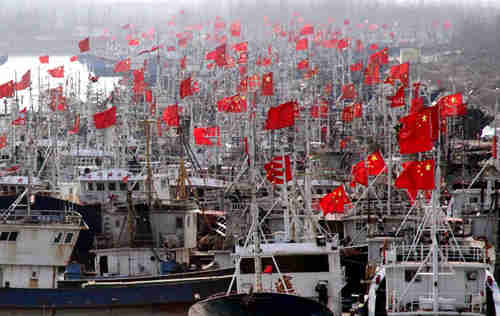 The new edition of the Pentagon’s annual report on China documents major advances in a number of areas where China’s military is aggressively preparing for war against the United States and its allies.

As we have been reporting for years, China has been developing numerous intercontinental ballistic missile systems that have no military purpose other than to target American cities, American bases, and American aircraft carriers.

According to the new report, these capabilities are now being extended to bombers:

The PLA (China’s “People’s Liberation Army”) has long been developing air strike capabilities to engage targets as far away from China as possible. Over the last three years, the PLA has rapidly expanded its overwater bomber operating areas, gaining experience in critical maritime regions and likely training for strikes against U.S. and allied targets. The PLA may continue to extend its operations beyond the first island chain, demonstrating the capability to strike U.S. and allied forces and military bases in the western Pacific Ocean, including Guam. Such flights could potentially be used as a strategic signal to regional states, although the PLA has thus far has not been clear what messages such flights communicate beyond a demonstration of improved capabilities.

Whereas a fleet of bombers is of great concern to Americans, China’s neighbors are probably more concerned about China’s activities in the South China Sea. The report says that China has largely completed its operation to create artificial islands, but continues to build infrastructure on the islands it has created, in order to support possible military operations in the future.

According to the report, China plans “floating nuclear power stations”:

China’s plans to power these islands may add a nuclear element to the territorial dispute. In 2017, China indicated development plans may be underway to power islands and reefs in the typhoon-prone South China Sea with floating nuclear power stations; development reportedly is to begin prior to 2020.

It is well-known that China’s activities in the South China Sea were declared illegal in 2016 by the United Nations Permanent Court of Arbitration in the Hague, which ruled them all in violation of international law. China claims it has the right to violate international law any time, although it laughably invokes international law when it is on its side. AFP and Dept. of Defense (PDF)

The report documents the means by which China uses military threats to enforce its claims to the South China Sea, referring to the techniques as “low-intensity coercion.” According to the report:

China continues to exercise low-intensity coercion to advance its claims in the East and South China Seas. During periods of tension, official statements and state media seek to portray China as reactive. China uses an opportunistically timed progression of incremental but intensifying steps to attempt to increase effective control over disputed areas and avoid escalation to military conflict. China also uses economic incentives and punitive trade policies to deter opposition to China’s actions in the region. In 2017, China extended economic cooperation to the Philippines in exchange for taking steps to shelve territorial and maritime disputes. Conversely, a Chinese survey ship lingered around Benham Rise in the spring after the Philippines refused several requests from China to survey the area. Later in the spring, CCG boats reportedly fired warning shots over Philippine fishing boats near Union Bank. In August 2017, China used PLAN, CCG, and PAFMM ships to patrol around Thitu Island and planted a flag on Sandy Cay, a sandbar within 12 nm of Subi Reef and Thitu Island, possibly in response to Manila’s reported plans to upgrade its runway on Thitu Island. China probably used coercion to pressure Vietnam to suspend joint Vietnam-Spain drilling operations in a disputed oil block in the South China Sea over the summer of 2017.

The South China Sea is international waters according to international law. When American Freedom of Navigation Operations (FONOPs) are performed by American warships passing through the SCS, they are invariably met with harsh threats and demands to leave.

Ever since Philippines President Rodrigo Duterte took office in 2006, he has sided with China in the South China Sea, saying essentially that he has no choice since China could crush the Philippines militarily. However, this position has always been contentious domestically. When Duterte first announced this position, I pointed out at the time that polls showed that polls showed an approval rating around 90 percent for Americans, but only around 50 percent for Chinese.

Duterte’s policy is wearing thin. In the last week, there was an incident where a Philippines plane was flying in the South China Sea, and received a radio warning from the Chinese:

Philippine military aircraft, I’m warning you again. Leave immediately or you will bear responsibility for all the consequences!

This implied threat of an attack by China’s military is an example of “low-intensity coercion.” In response, Duterte on Friday criticized China for using “nasty words” to its pilots:

You know very well that we will not attack. … We’re not prepared to go to war with you so why do you have to say those nasty words?

I think it is safe to say that this whiny pleading by Duterte will not have any effect on the Chinese. ABS-CBN (Philippines)

An important part of China’s coercion technique is the use of the People’s Armed Forces Maritime Militia (PAFMM).

The PAFMM is the only government-sanctioned maritime militia in the world. In the past, the vessels in the PAFMM were from companies or ordinary fishermen. What has changed now, according to the report, is that China is building a large state-owned fishing fleet. These are like vigilante boats that harass and block fishing boats from other nations and perform other functions in conjunction with the PLA. According to the report:

In the South China Sea, the PAFMM plays a major role in coercive activities to achieve China’s political goals without fighting, part of broader PRC military doctrine stating confrontational operations short of war can be an effective means of accomplishing political objectives. The militia has played significant roles in a number of military campaigns and coercive incidents over the years, including the 2009 harassment of the USNS IMPECCABLE conducting normal operations, the 2012 Scarborough Reef standoff, the 2014 Haiyang Shiyou-981 oil rig standoff, and a large surge of ships in waters near the Senkakus in 2016.

The PAFMM unit operating in the South China Sea is paid salaries independent of any clear commercial fishing responsibilities and recruited from recently separated veterans.

This appears to be similar to China’s practice of establishing large communities of Chinese students or workers in other countries, keeping them under the control of Beijing’s international coercive propaganda agency, the “United Front Work Department” (UFWD). As I have described in the past, there is almost a form of mind control involved in these communities, which the Chinese describe as “Magic Weapons.” On command from the UFWD, these students and workers demonstrate, complain or riot to implement Chinese policy. China Defense Blog (30-Jun-2016)

China’s preparations for war with Taiwan

The report says that “One of the overarching goals of the structural reforms now reshaping the PLA is to construct a military capable of conducting complex joint operations, including those that would be involved in a Taiwan contingency.”

The report lists several “courses of action” that China’s military could take to invade Taiwan:

If the United States should intervene in the takeover of Taiwan, China would try to delay effective intervention and seek victory in a high-intensity, limited war of short duration.

The growing military threat from China

In a sense, there is nothing particularly new in this report, since it is just the next annual iteration of China’s preparations for a pre-emptive attack on the United States at a place and time of its choosing, which I have been writing about for well over a decade.

As I have mentioned before, people my age have never understood how it was possible for Adolf Hitler to have so thoroughly fooled the British government in 1938. The Nazis were spending enormous amounts of money building an army, navy, and air force whose only real purpose was to attack the British Isles, but it was completely ignored by the British public except, famously, for Sir Winston Churchill, who warned of the approaching attack, but was scorned and ridiculed for doing so.

Today, few people want to contemplate the possibility of a pre-emptive attack by China, even though it is just as certain as the Nazi attacks that started World War II. But there are differences today. The Pentagon has been aware for years of the military buildup by the Chinese and has been producing the annual reports for years as well.

China’s activities in the South China Sea have repeated Nazi activities by annexing regions belonging to other nations. These activities have been so blatant and obvious that anyone with even the slightest knowledge of what is going on in the world is aware of it.

So the Pentagon and the United States military have been preparing militarily for war with China at least since the 1990s.

The presidency of Donald Trump has brought a new urgency to the danger from China.

As regular readers know, Generational Dynamics predicts that there is an approaching Clash of Civilizations world war, pitting the “axis” of China, Pakistan and the Sunni Muslim countries against the “allies,” the U.S., India, Russia, and Iran. Part of it will be a major new war between Jews and Arabs, re-fighting the bloody the war of 1948-49 that followed the partitioning of Palestine and the creation of the state of Israel. The war between Jews and Arabs will be part of a major regional war, pitting Sunnis versus Shias, Jews versus Arabs, and various ethnic groups against each other. The Trump administration is generally aware of all this, even if the mainstream media are not.