Malta takes in 49 migrants after deal with E.U. that infuriates Italy 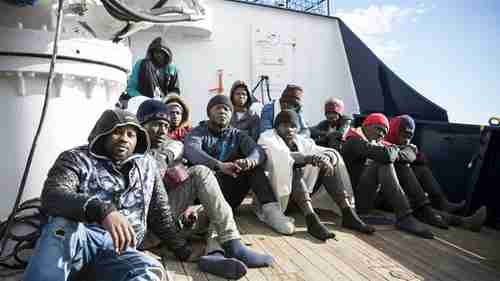 A total of 49 migrants in two rescue boats, including a baby and several children, who had been rescued weeks ago in the Mediterranean Sea as they traveled in dinghies from Libya trying to reach Europe, will be permitted to disembark in the island nation of Malta. The two rescue ships are the German vessel Sea Watch 3 and the Dutch boat Sea Eye.

For years, Malta has refused to take in migrants from rescue boats, forcing the boats to continue northward to Italy. This infuriated the Italians, who were receiving thousands of migrants that they were forced to take in under international and European law.

However, Italy has been closing its ports to rescue ships in the last year, and in November, Italy’s parliament passed a tough anti-migrant law put forth by Italy’s Interior Minister Matteo Salvini. The law restricts the conditions under which migrants will be permitted to stay in Italy and makes it much easier to deport them.

The deal reached between Malta and the E.U. also took into account the fate of 249 migrants already in Malta, having been rescued in December. The 298 migrants will be distributed to other E.U. countries under the deal.

176 would be sent to Germany, France, Portugal, Ireland, Romania, Luxembourg, the Netherlands, and Italy. Another 78 will be allowed to stay in Malta, while 44 Bangladeshi migrants will be repatriated.

In a tweet, Sea Watch International said: “The E.U. decided to release their 49 hostages. After 19 days at sea, our guests will finally reach a safe port. This represents a confession of state failure, policy must not be made at the expense of people in distress.”

However, Italy’s interior minister Salvini refused to authorize the deal and said that Italy would not take in any additional migrants. Salvini said that other European countries had not fulfilled their previous commitments to accept migrants who had already reached Italy.

In July 2018, Germany, France, Portugal, Spain, and Malta agreed to each take in 50 of around 450 migrants disembarked in Sicily by the Italian coastguard vessel Diciotti after being rescued at sea. According to Salvini, France has taken its 50, but Germany only 23, Spain 21, Portugal 19, and Malta none. Ireland, which said it would take in 20, has received 16 migrants, he said.

This resulted in name-calling between Salvini and Malta. The government of Malta disputed Salvini’s figures, expressing “disdain and surprise at the inaccurate allegations by Minister Salvini.”

Salvini responded: “We’re not going to take any lessons from Malta, which closed its eyes for years so that boats could head for Italy. The music has changed, you can only come to Italy if you have a permit. We’ve already taken in too many, it’s time for others to wake up.” AFP (29-Nov-2018) and Al Jazeera and Guardian (London) and Reuters

Readers may recall that when Italy held nationwide elections in March of last year, the elections failed to produce a majority party. Two particularly bitter rivals were the left-wing Five Star Movement (M5S), led by Luigi Di Maio, and the right-wing La Lega (The League), led by Matteo Salvini. The two parties received a combined total of 49 percent of the vote and, incredibly, these two parties got together and formed a governing coalition. They are far apart on many issues, but they do share similar attitudes on three issues: a nationalistic anti-euro attitude, a xenophobic anti-immigrant attitude, and a complete lack of fiscal discipline. Much to everyone’s surprise, they formed a governing coalition based on these three principles. And after a lengthy period of negotiation, Di Maio and Salvini decided that neither of them could be prime minister, and they selected a technocrat, Giuseppe Conte, to fill that role.

Wednesday’s deal between Malta and the E.U. provoked something of a crisis in this governing coalition. Salvini refused to authorize the deal or to accept any more migrants. But Salvini, Di Miao, and Conte had an all-night working session on Wednesday evening, and Di Maio sided with Conte against Salvini to accept the deal, which required Italy to take in ten migrants.

Salvini was infuriated by that decision:

“There is convergence within the government on a hard line: ports closed, fight against smugglers and NGOs,” Salvini said on Thursday.

“And I add that any new arrival must not cost Italian citizens a cent. [I]t’s the interior ministry that handles immigration.”

A compromise was agreed by which Italy’s Waldensian Evangelical Church would take in the ten migrants.

In 2015, millions of migrants entered Greece. After the “Balkan route” was closed, most migrants entered Europe through Italy in 2016 and 2017. Italy’s government was begging the other E.U. states to take their fair share of migrants, but the pleas fell mostly on deaf ears. In 2018, the new government shut Italy’s ports. This caused a huge international outcry that continues to this day, but now most migrants enter Europe from Morocco through Spain. AFP and The Local (Italy) and El Pais (28-Nov-2018)