U.N. Secretary-General Antonio Guterres flew from Tripoli to Benghazi on Friday to meet with warlord Khalifa Haftar, whose forces are converging on Tripoli in a push to dislodge the U.N.-sanctioned but distressingly ineffectual Government of National Accord (GNA).

Haftar dispelled much of the ambiguity surrounding his actions on Thursday by ordering his troops to advance on Tripoli in what he described as a “victorious march” to “shake the lands under the feet of the unjust bunch” headquartered there.

“We are coming, Tripoli. We are coming,” he told the people of the city in a recorded statement. “Those who lay down their weapons are safe, and those who raise the white banner are safe.”

Secretary-General Guterres, who was already in Tripoli for an upcoming summit on Libya’s future, decided it would be a good idea if he went to Haftar instead of waiting for the strongman’s Libyan National Army (LNA) to arrive at the gates of the capital city. Guterres accordingly flew to Benghazi, the LNA’s eastern headquarters, for a meeting. He also announced plans to visit Tobruk, where the political faction Haftar supports has established its own competing government called the House of Representatives (HoR).

“My aim remains the same: avoid a military confrontation. I reiterate that there is no military solution for the Libyan crisis, only a political one,” Guterres said as he departed on his peace mission. 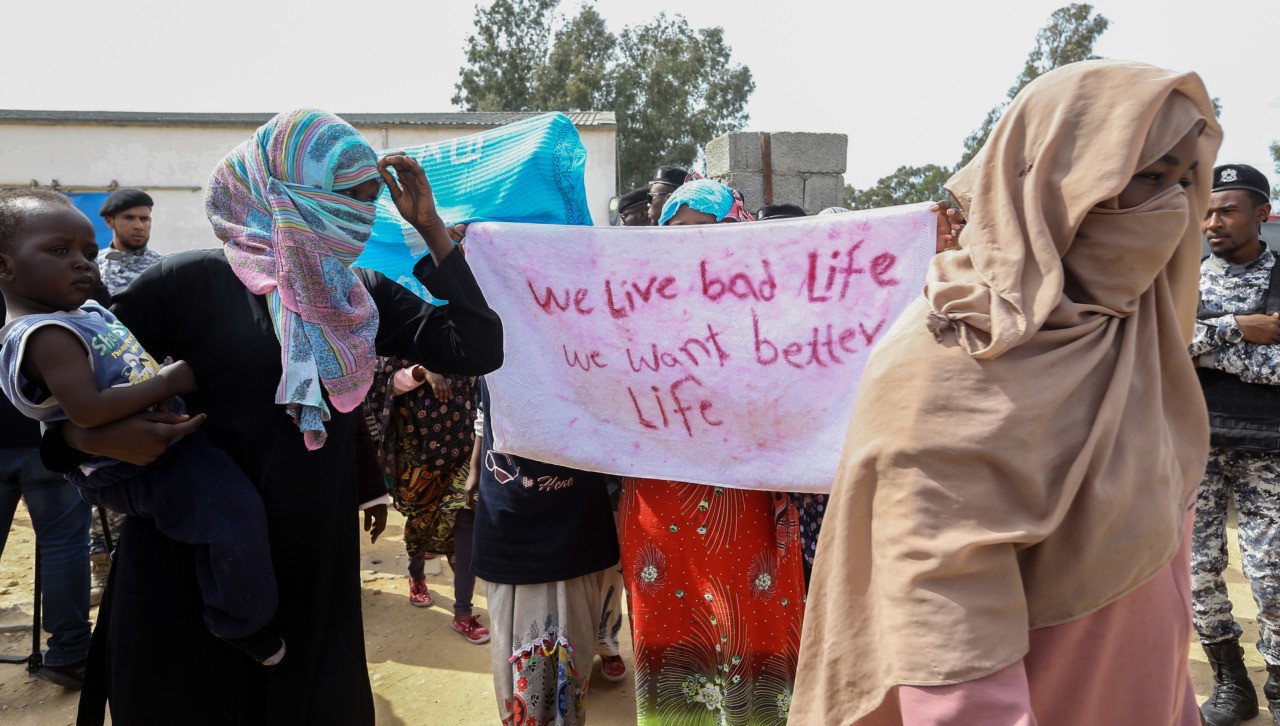 Migrants hold a placard during United Nations Secretary-General Antonio Guterres (unseen) visit to Ain Zara detention centre for migrants in the Libyan capital Tripoli on April 4, 2019. – UN Secretary General Antonio Guterres said he was “shocked” by the level of suffering of migrants at a detention centre in Tripoli which he visited during a visit to the Libyan capital (MAHMUD TURKIA/AFP/Getty)

Meanwhile, Germany called for an emergency meeting of the U.N. Security Council to discuss the alarming situation in Libya. “We call on those in authority to stop military operations immediately and to distance themselves from further escalatory rhetoric,” a spokesman for German Chancellor Angela Merkel said on Friday.

Italy, which sits across the Mediterranean from Libya and has been forced to deal with the tidal wave of refugees pouring through the shattered country, added a call for restraint and insisted there is no “military solution” to Libya’s problems.

Italy joined the United States, France, the United Kingdom, and the United Arab Emirates in a joint statement declaring “threats of military action would only have the effect of propelling Libya back into chaos.” French and UAE participation in the joint statement was significant because both countries have supported Haftar until now, based on his success in subduing extremist elements in southern and eastern Libya.

Russia, which also supports Haftar, said on Friday it is not assisting his drive on Tripoli and supports a negotiated political settlement to the Libyan civil war.

“Of course we consider that the most important thing is that operations there do not lead to bloodshed. The situation should be resolved peacefully,” said Kremlin spokesman Dmitry Peskov.

Russian support has allegedly included supplying the LNA with mercenaries and weapons, including artillery and drones. The U.S. criticized Russia for using “oligarch-funded quasi-mercenary military advisers” to tip the balance of power in Libya and gain favor with aspiring autocratic rulers like Haftar so they can control Libya’s oil and other natural resources. 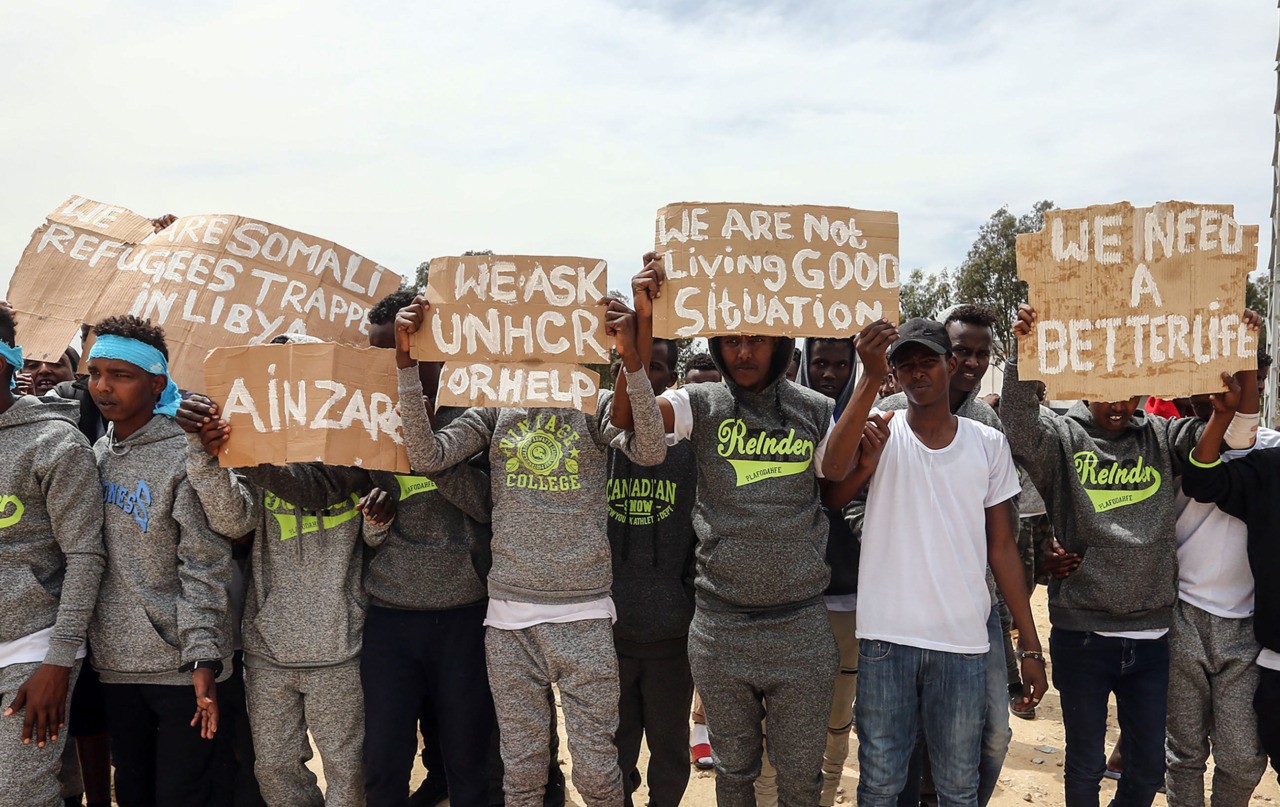 The Government of National Accord pushed back against Haftar overnight, driving LNA forces away from an important checkpoint less than 20 miles from Tripoli and reportedly capturing about 145 LNA troops plus 60 of their vehicles.

Militia forces loyal to the GNA have been seen moving weapons from coastal Misrata to Tripoli to shore up its defenses after Prime Minister Fayez al-Sarraj declared a military alert. Armed groups loyal to Sarraj announced they are prepared to “stop the cursed advance” of LNA forces.

The highest Muslim religious authority in Libya, Grand Mufti Sadiq al-Ghariani, called on the Libyan people to “resist and fight against Haftar’s forces in Tripoli” in order to prevent “crimes against humanity” like those allegedly perpetrated by the LNA in Benghazi and other cities.

“It is no longer a secret that the U.N. mission in the country cooperates with Haftar,” Ghariani charged.

“We will not be subdued by any use of force by any side or any person. And if anyone is willing to use force against us we’re ready for sacrifice but we will not give up on democracy which we’ve always wanted from the beginning,” a defiant Interior Minister Fathi Bashagha said on Friday.