Turkey’s invasion of northeastern Syria to drive the Kurds away from the Turkish border is bringing more Western attention to the Kurds than they received during the long and bloody Syrian civil war, where they played a key role in defeating the Islamic State.

Here are some important things to know about the Kurds.

There is no unified Kurdish state: The Kurds are an ethnic group spread across Syria, Iraq, Turkey, Iran, and Armenia. They are one of the largest ethnicities in the Middle East, but they do not have a common political system, religion, or even a universal language.

Most Kurds are Sunni Muslims, but they also have Christian and Jewish communities. They were largely Christian until the 6th Century when they were conquered by Arabs and most converted to Islam. Some Kurds belong to much smaller religious sects, notably including the Yazidis, who were almost exterminated by the Islamic State. Whether Yazidis should be included under the umbrella of Kurdish identity remains a hotly contested issue.

The Kurds are generally regarded as one of the most tolerant Muslim-majority groups in the Middle East and have a reputation for protecting persecuted minorities, which is one reason evangelicals who generally support President Donald Trump have become critical of his decision to allow the Turkish invasion.

When World War I redrew the boundaries of the Middle East, the Kurds anticipated receiving their own state and were promised one during complicated wartime negotiations, but the growing strength of the Ottoman Empire (Turkey) dashed those hopes by the time the crucial Treaty of Lausanne was signed in 1923. This is one of the reasons for the enduring friction between the Turks and the Kurds.

The Kurds have been split between several different nations ever since, an often restless minority in every country where they live. They do have two significant areas of control, the semi-autonomous Kurdish region of Iraq and the less independent but distinct Kordestan region of Iran.

The Iraqi Kurdistan region made big news in September 2017 by voting to secede from Iraq in one of the most controversial referenda of modern times. The Kurdish bid for independence was forcibly suppressed by the Iraqi central government with the aid of Iran-backed Shiite militia forces.

Among the most prominent American supporters of Kurdish independence at the time was former U.N. Ambassador John Bolton, who would later become National Security Advisor to President Donald Trump. Bolton argued, in essence, that the Kurds deserved their own state and would likely prove more effective administrators than the Iran-aligned central government in Baghdad.

Kurds take part in a demonstration in Arbil, the capital of the northern Iraqi Kurdish autonomous region, on October 10, 2019 against the Turkish offensive in northeastern Syria. – Syria’s Kurds battled to hold off a Turkish invasion on October 9 after air strikes and shelling launched a long-threatened operation that could reshape the country and trigger a humanitarian crisis. (SAFIN HAMED/AFP via Getty Images)

The Kurds in Syria are not one unified group: The Kurds are not just divided by national boundaries. They are divided into numerous tribes and political factions. Kurdish political organizations have a penchant for three-letter acronyms that can make them a little difficult for outsiders to tell apart, especially since the acronyms do not correspond to the English translations for the party names – for example, the Kurdistan Workers’ Party in Turkey is the PKK, while the People’s Protection Units of Syria are known as the YPG. The female combat wing of the YPG is known as the YPJ.

The Kurds in Syria are not one unified group, and they do not all live in the area currently under attack by Turkey. The most powerful Kurdish faction in Syria is the Democratic Union Party (PYD), which is linked to the YPG militia.

A number of smaller Syrian Kurdish factions oppose the PYD and are aligned with the Iraqi Kurds and their semi-autonomous government, known as the KRG. The Kurdish opposition factions collectively identify themselves as the Kurdistan National Council (KNC).

Fighting against the Turkish incursion is the Syrian Democratic Forces (SDF), a Kurdish-led umbrella group created with U.S. assistance to combat the Islamic State. The SDF is not exclusively Kurdish, but it has Kurdish leadership and includes many armed Kurdish groups, including YPG units and fighters expressly aligned with the PKK.

The Kurdish separatist party in Turkey is a Marxist terrorist organization: The Kurdistan Workers’ Party (PKK), as the name might suggest, is a Marxist political party as well as a Kurdish nationalist group. It was founded in the late 1970s as an expressly radical and violent group willing to carry out violent attacks on both the Turkish government and other Kurds seen as collaborators with the Turks.

The PKK was openly at war with the Turkish government within a few years of its founding. The conflict has alternated between terrorist vs. counter-terrorist cat-and-mouse and outright military combat, with Turkish troops attacking PKK-occupied villages in Turkey and PKK bases in Iraq.

The conflict between Turkey and the PKK has occasionally simmered down into an uneasy truce, the most recent one lasting about two and a half years and ending in 2015 when PKK fighters murdered a group of Turkish policemen. The war between Turkey and the PKK has been extraordinarily bloody, with thousands of casualties and hundreds of thousands of civilians displaced.

During its more peaceful interludes, the PKK has attempted to remodel itself into a more conventional Turkish political party and set aside its separatist ambitions, but these reforms never seem to last for long.

The PKK is designated a foreign terrorist organization by the U.S. government, a status renewed upon review in March 2019. NATO, which counts Turkey as a member, also considers the PKK terrorists, as does the European Union, which Turkey has aspirations to join.

Connections between the PKK and Syrian Kurds are a major point of contention: The central question behind the Turkish invasion of Syria is whether Turkey’s assertions of a link between the PKK and Syrian Kurdish groups, specifically the PYD political organization and YPG militia, are accurate. Strangely for such a pressing issue, there has not been a high-profile international effort to definitively refute or confirm Turkey’s claims.

The Turks view the PYD and YPG as wings of the PKK and accuse the Syrian groups of supporting terrorist activities in Turkey. Turkish media routinely describes the PKK and YPG as one and the same. The stated purpose of the Turkish invasion is to “destroy the terror corridor which is trying to be established on our southern border and to bring peace to the region,” as Turkish President Recep Tayyip Erdogan put it.

Erdogan’s critics view him as paranoid and eager to find political scapegoats. They accuse him of trying to marginalize Kurdish parties in Turkey by unfairly lumping them all in with the PKK as subversives. The U.S. government officially supports the YPG as an ally against ISIS and does not consider it linked to the PKK, or at least not as closely as Turkey alleges.

American support for the YPG enrages Turkey, which feels the U.S. is effectively supporting a terrorist organization at war with its NATO ally in Ankara. Turkey and its supporters believe the United States overlooked too many nefarious connections between Syrian Kurdish groups and terrorists in its desperation to recruit battlefield allies against ISIS.

One major link between the PKK and PYD/YPG is an influential Kurdish political leader named Abdullah Ocalan, who founded the PKK in Turkey and was influential in the formation of the PYD in Syria.

The optimistic version of their relationship is that the PYD distanced itself from Ocalan, who has been serving a life sentence on terrorism charges in Turkish prison since 1999, while Ocalan’s radical socialist and separatist views have mellowed a bit in his later years.

The pessimistic version is that the PYD remains Marxist or even Maoist in its ideology, continues to view Ocalan as its intellectual godfather, and shares few values with the United States beyond mutual animosity toward the Islamic State. People in the region who cleave strongly to one of these views about the PYD tend to believe the other side is either naive or arguing in bad faith.

NATO Secretary-General Jens Stoltenberg on Wednesday granted that Turkey has “legitimate security concerns” because it has “suffered horrendous terrorist attacks” and “hosts millions of Syrian refugees,” but he came short of explicitly endorsing Turkey’s view of the YPG militia and urged the Turks to “avoid actions that may further destabilize the region, escalate tensions, and cause more human suffering.” 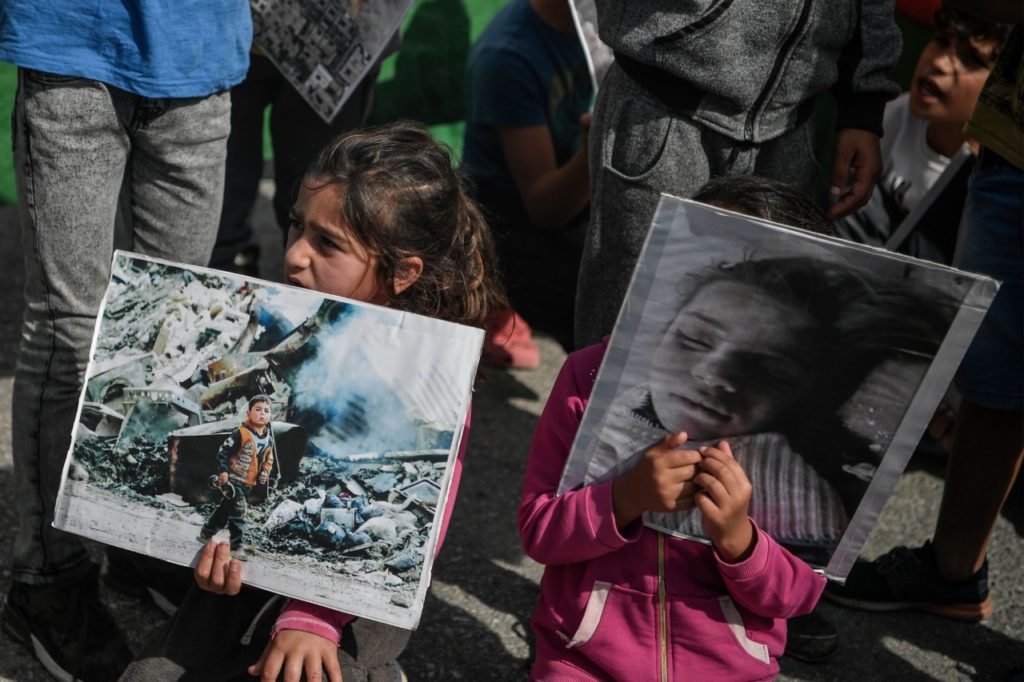 Children hold photographs, as Syrian Kurd refugees protest at the Ritsona camp, some 80 km north of Athens, on October 10, 2019, after Turkey launched an assault on Kurdish forces in northern Syria with air strikes and explosions reported along the border. – Ritsona camp houses some 950 refugees, mainly Syrians and Kurds (LOUISA GOULIAMAKI/AFP via Getty Images)

The Kurds often find themselves drawn into political conflicts in the countries they inhabit because, as an often neglected or persecuted minority group in a highly volatile region, they make appealing allies for outsiders opposed to the regimes in power.

These relationships with outside powers tend to end unhappily because the one thing every Middle Eastern government agrees on, from Ankara to Baghdad, is keeping the Kurds from forming an independent state and absorbing territory from existing countries, especially territory that happens to contain large quantities of oil. Since the Kurds themselves are not a coherent nation-state, it is difficult for them to maintain long-term strategic relationships with great powers.

The world did very little when Iraqi dictator Saddam Hussein used chemical weapons to attempt outright genocide against the Kurds in 1988, although Hussein was eventually charged with the crime in Iraqi court after he was overthrown. The first Bush administration was criticized for urging the Kurds to rise up against Hussein during Operation Desert Storm in 1991 but then abandoning them when Hussein crushed their rebellion. In 2007, after Hussein finally got his just desserts, Turkey grew nervous about independence-minded Kurds in northern Iraq and launched a series of punishing airstrikes against them, ostensibly targeting PKK positions.

The Kurds count four distinct attempts at genocide or ethnic cleansing against them: the Ottoman Empire’s effort to wipe them out, along with the Armenians and Assyrian Christians, during World War One; an energetic effort to force them out of Iraq in 1970; Saddam Hussein’s attempts to kill them off during the long and brutal Iran-Iraq War; and the chemical weapons strike in 1988.