After something big happens, the temptation is to say, in retrospect, “Oh yeah, it was obvious.  We all knew that would happen.”  As they say, everyone has 20/20 hindsight.

And that was the case after the fall of the Berlin Wall 30 years ago, as well as the overall end of the Cold War and the actual end of the Soviet Union. 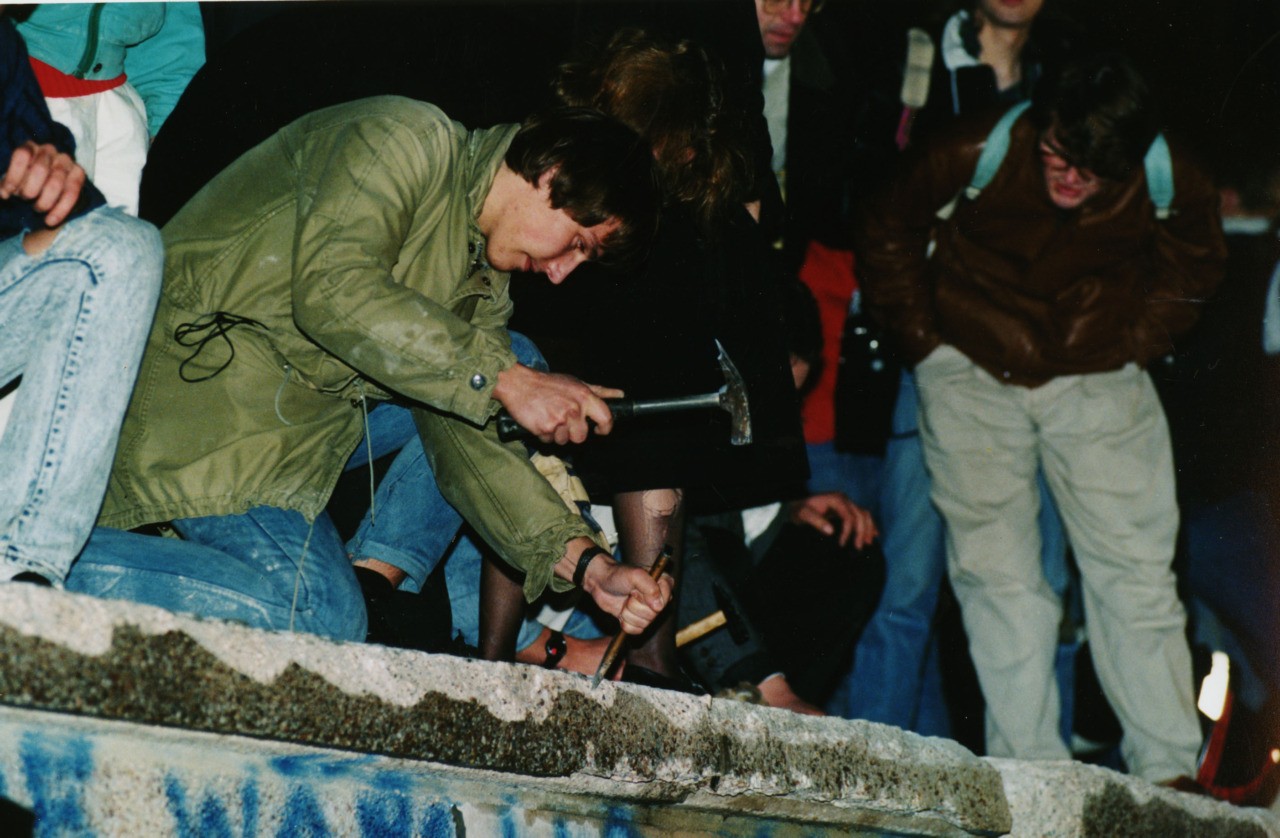 A man sits atop the wall nearby the Brandenburg gate, November 10, 1989, as he chisels a piece of the wall that divided East and West Berlin. (AP Photo/Jockel Finck) 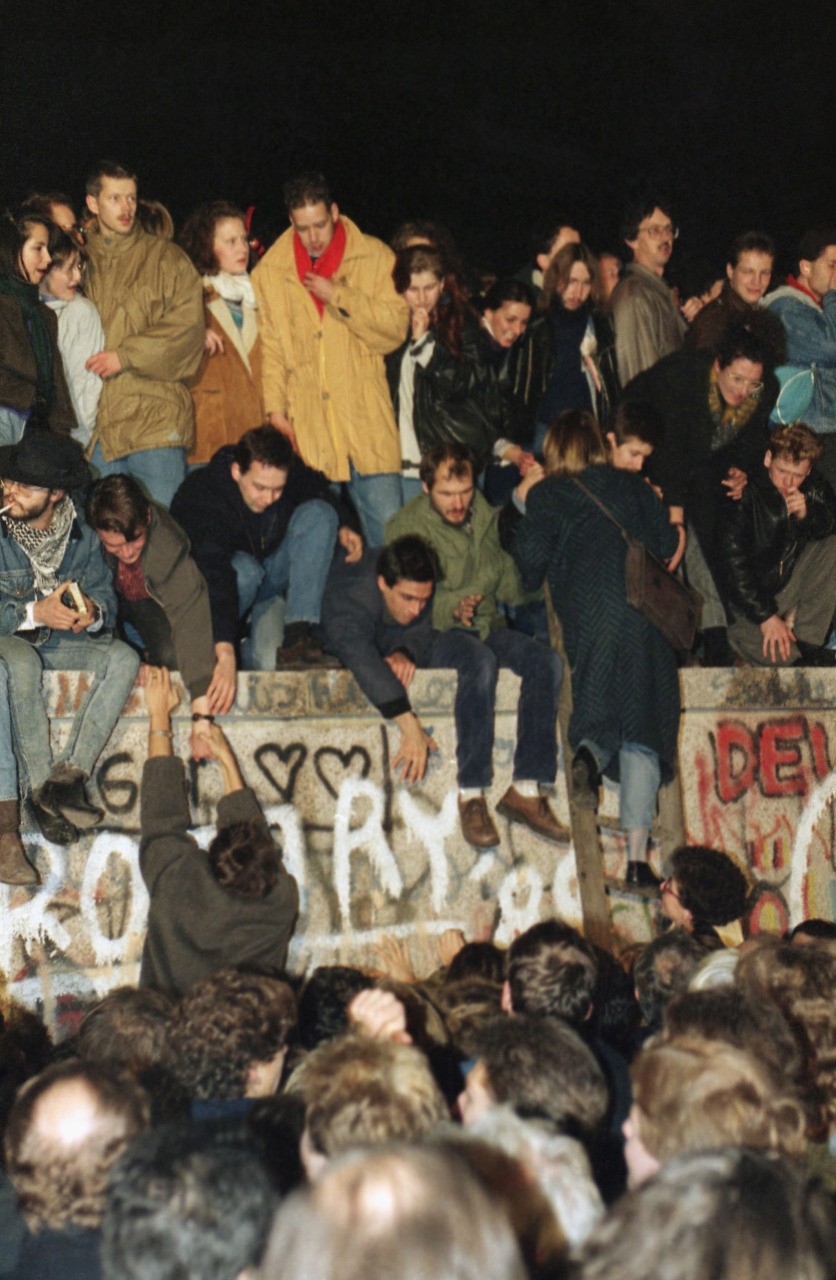 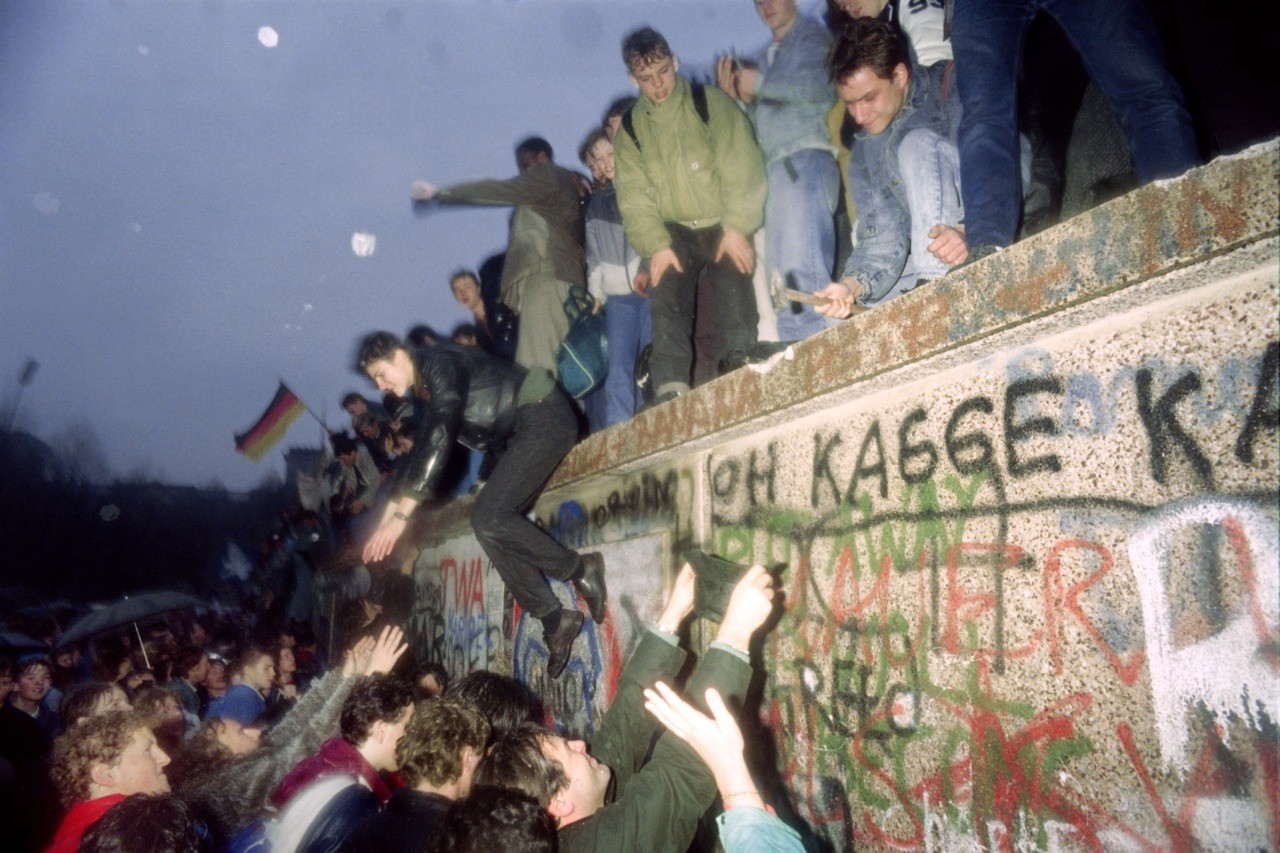 People from East Germany greet citizens of West Germany at the Brandenburg Gate in Berlin on December 22, 1989. (PATRICK HERTZOG/AFP via Getty Images) 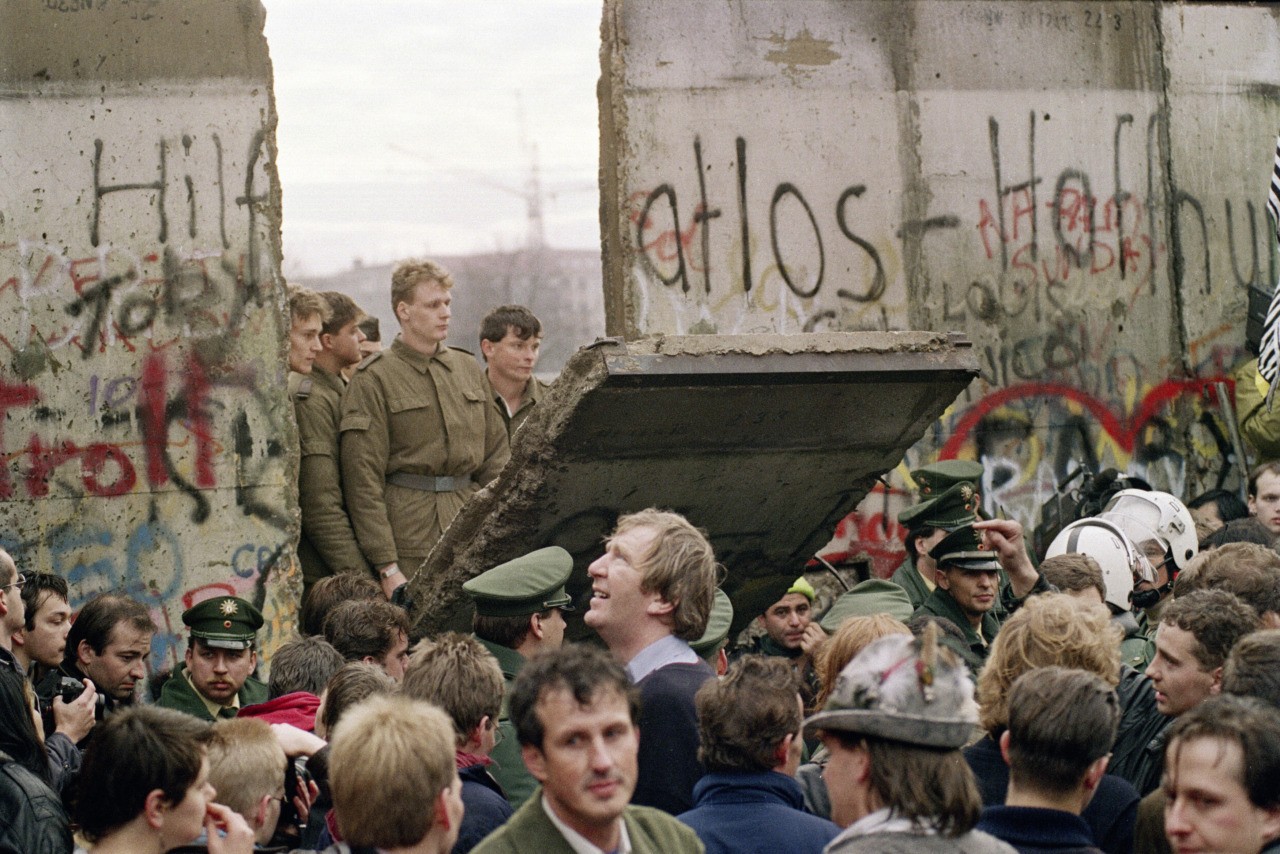 West Berliners crowd in front of the Berlin Wall early November 11, 1989, as they watch East German border guards demolishing a section of the wall in order to open a new crossing point between East and West Berlin, near the Potsdamer Square. (GERARD MALIE/AFP via Getty Images)

After all that happened, lots of people, including experts, said, Of course the Soviet Union was going to collapse.  They were so far behind to begin with, and so overstretched, and then came Pope John Paul II offering his own kind of conservative liberation theology; and the Xerox machine, offering new potentials in communication; and Afghanistan, which showed the Red Army’s weakness; and Chernobyl, which revealed the system’s basic incompetence.  So yes, of course, the Russians were a mess and were due to go down.  We all knew it.

Then many of them will add a partisan touch, designed to steal credit from the man to whom it is due: So it really didn’t matter who was the president of the United States—the Soviet collapse would have happened no matter who was in the Oval Office.

This is a rewriting of history.  In fact, the fall of the Wall took almost everyone by surprise.  I know, because I was there, living in Washington, DC; I was working at the White House, in fact, deeply involved in politics and policy.  To be sure I was working in domestic policy, not foreign policy, although I always did my best to be a good anti-communist.

More to the point, I knew many people who were involved in international affairs and national security, and none of them foresaw the Wall falling.  Most were staunch anti-communists, who would have been thrilled to think that communism would end up on the ash heap of history, and yet they just didn’t see it happening—at least no time soon.  Mostly, they envisioned themselves diligently serving out their careers in the “long twilight struggle,” to use John F. Kennedy’s famous description of the Cold War.

Yet one man did foresee the Wall coming down, and that man counted—for a lot.

That man, of course, was Ronald Reagan, our 40th president.  On May 17, 1981, speaking to the University of Notre Dame, he declared, “The West won’t contain Communism, it will transcend Communism.”

Indeed, the full quote, in context, is even better:

The years ahead are great ones for this country, for the cause of freedom and the spread of civilization.  The West won’t contain communism, it will transcend communism.  It won’t bother to dismiss or denounce it, it will dismiss it as some bizarre chapter in human history whose last pages are even now being written.

So yes, Reagan, in the first four months of his presidency–just two months after he’d been shot in the chest, by the way–was issuing a bold prophesy, writing off communism.  Talk about vision.  Talk about seeing beyond the years.

Yet the Gipper wasn’t just talking against communism, he was also acting against communism.  He was, in fact, working with the Pope and British Prime Minister Margaret Thatcher to build a new kind of anti-communist alliance, including, but not limited to, the Contras in Nicaragua, the Mujaheddin in Afghanistan, and the shipyard workers of Gdansk, Poland.  A superb chronicle of this remarkable effort was published a few years ago by Peter Schweizer, a frequent Breitbart News contributor. The title tells it all: Victory: The Reagan Administration’s Secret Strategy that Hastened the Collapse of the Soviet Union.

Yet, back in the 80s, most people (or, I guess I should say, “most people,” as in, the people who did most of the talking) didn’t think Reagan was capable of managing a secret strategy to hasten the collapse of anything, except maybe his own presidency, or the United States of America.  Certainly, we were assured, someone as dim as Reagan could not figure out how to hurt the formidable Union of Soviet Socialist Republics—at least not without hurting the U.S. more.

Beltway doyen Clark Clifford declared that Reagan was an “amiable dunce,” and everyone in Georgetown thought that was both funny and true.  Yet even if Reagan was amiable, the conventional wisdom continued, his policies were dangerously dunderheaded.  That is, his economic policy was thought to be wrecking our prosperity, even as his foreign policy was said to be wrecking the world.

The Establishment’s deepest fears were brought to the fore on March 8, 1983, when Reagan called the Soviet Union “The focus of evil in the modern world . . . an evil empire.”  In response, virtually every “enlightened” observer attacked the president as some sort of Armageddon-bent kook.  For instance, Henry Steele Commager, an eminent don at Amherst College, somberly intoned, “It was the worst presidential speech in American history, and I’ve read them all.”

Please trust me on this: In the early 80s, virtually all of the commentary in the major media was that dismissive, if not always that explicitly hostile: Reagan is not only a dopey guy, but a scary guy.  If he keeps it up, he could get us all killed in a nuclear war. Unless, that is, he changes course and starts heeding The Washington Post, the Brookings Institution, and the Council on Foreign Relations—or better yet, is defeated for re-election in 1984.

Yet interestingly, even with Reagan in the White House for another four years, America didn’t fall apart, nor did the world blow up. In fact, it was around 1985 that the serious weakness of the Soviet Union became apparent—even as, of course, the U.S. economy continued to boom.

Indeed, the rot in Russia was so glaring that the new Soviet chief, Mikhail Gorbachev, realized that he had to make substantial changes.  And so he did, applying reformist concepts such as glasnost and perestroika.  Yet those top-down changes were just cosmetic; they didn’t help, and so the USSR continued to totter.

In the decades since, Gorbachev has tried to spin himself as some sort of liberal reformer (and the MSM has been happy to make him a hero, if only to keep from giving Reagan any credit), and yet in fact, Gorbachev was just another communist dictator who wanted to make dictatorial communism work.  If he failed–and he did–it wasn’t for lack of red enthusiasm.

Meanwhile, Reagan kept on his course.  He was not interested in fighting a hot war against communism; in fact, during his his years in office, he was actually quite circumspect about committing U.S. troops overseas.  Instead, Great Communicator that he was, Reagan knew better ways to apply pressure on the Russians; he could speak to the hearts and minds of those hundreds of millions of souls trapped behind the Berlin Wall. 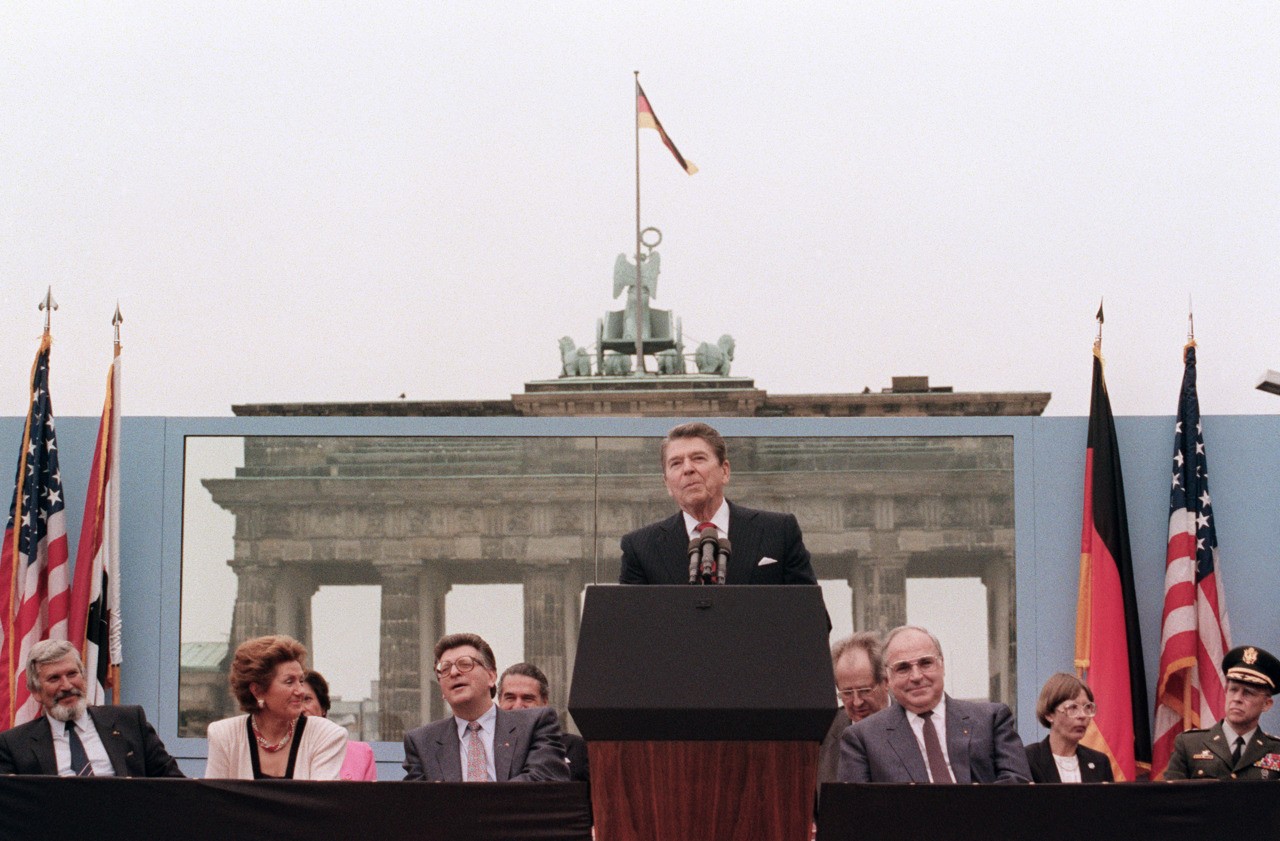 President Ronald Reagan delivers his famous command to “Tear down this wall!” in a speech at the Brandenburg Gate, near the Berlin wall on June 12, 1987. (MIKE SARGENT/AFP via Getty Images)

It was on June 12, 1987, that Reagan addressed the captive nations directly:

Those last words, “tear down this wall!” went off like a rocket around the Eastern Bloc, including within the Evil Empire itself.

Yet it was Reagan who had the vision to see it happen, and the strategy to make it happen.  While the elites were mocking him and laughing at his efforts, Reagan was winning the Cold War.   In the annals of American presidential leadership, it doesn’t get any better than that.

And so today, if anyone tells you that he or she foresaw the collapse of Soviet communism–or claims to knows of someone, other than Reagan, who saw it coming–make ‘em prove it.