Abortion was once again the number-one cause of death globally in 2020, with a record 42.7 million unborn babies killed in the womb, according to data provided by Worldometer.

As of December 31, 2020, there were 42.7 million abortions performed in the course of the year, Worldometer revealed, while 8.2 million people died from cancer, 5 million from smoking, and 1.7 million of HIV/AIDS.

By comparison, worldwide deaths from the coronavirus in 2020 totaled 1.8 million, according to Johns Hopkins University.

Worldometer — voted one of the best free reference websites by the American Library Association (ALA) — keeps a running tally through the year of major world statistics, including population, births, deaths, automobiles produced, books published, and CO2 emissions.

It also registers the total number of abortions performed worldwide, based on the latest statistics on abortions published by the World Health Organization (WHO). 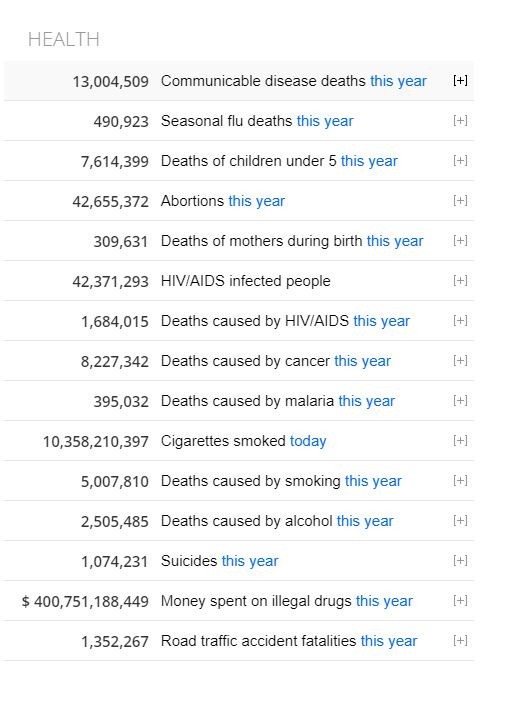 Globally, there were more deaths from abortion in 2020 than all deaths from cancer, malaria, HIV/AIDS, smoking, alcohol, and traffic accidents combined, according to Worldometer statistics.

The shocking number of deaths from abortion, in fact, has led certain observers to call abortion “the social justice cause of our time,” since the sheer magnitude of the problem completely overshadows other human rights issues.

The year 2020 also saw abortion legalized in Argentina, one of the last bastions in the world to recognize and protect the right to life of unborn children.

In their yearly Christmas message, the Argentinean bishops denounced the government of Alberto Fernández for its “feverish obsession” with extending abortion rights in the midst of a pandemic.

Instead of attending to the real needs of the people of Argentina, the government adopted an “incomprehensible urgency” with establishing abortion in Argentina, the bishops declared, “as if it had something to do with the sufferings, fears, and concerns of most Argentineans.”

“This Christmas we find ourselves in a historic moment calling for an arduous rebuilding of employment, education, institutions, and brotherly ties,” the bishops stated, and instead of addressing these urgent needs, the government chose to push the abortion agenda.

“In recent weeks, the panorama has darkened,” they wrote. The government should be defending the human rights of the weak rather than “denying them to the unborn.”

The abortion lobby also targeted Poland after a High Court ruling outlawed eugenic abortions performed on babies with Down syndrome and other disabilities.

The pro-abortion Women’s Strike movement organized demonstrations in major cities, with one group gathering in the center of Warsaw and then marching toward the house of Jaroslaw Kaczynski, the head of Poland’s ruling Law and Justice Party (PiS).

In early October, Poland’s Constitutional Tribunal struck down a provision permitting doctors to abort fetuses on the basis of congenital defects, ruling that the law violated the national Constitution, which guarantees the right to life.

In its decision, the court argued that aborting a child because of probable birth defects constituted eugenics, an effort to rid society of the weak and undesirable, notoriously practiced by the Nazis against Jews and disabled persons, and advocated by Planned Parenthood founder Margaret Sanger against blacks and minorities in the United States.

Along with the capital of Warsaw, pro-abortion demonstrations were held in Poznan, Warsaw, Wroclaw, Krakow and other cities, and protesters invaded churches while service were taking place, “confronting priests with obscenities” and spray-painting churches with slogans and phone numbers of abortion providers, Associated Press (AP) reported.

On December 28, Christians around the world celebrated the Feast of the Holy Innocents, commemorating the decree by King Herod that all male children in Israel under the age of two were to be slaughtered in an effort to kill the newborn Christ child. Pope Francis has compared the massacre of the Innocents to the modern practice of killing babies through abortion.

The 48th annual March for Life in the United States will take place in Washington, D.C., on January 29, 2021 with the theme “Together strong, life unites!”

The stated purpose of the march is to end abortion by “uniting, educating, and mobilizing pro-life people in the public square.”

The annual march commemorates the infamous January 22, 1973 Supreme Court decision in Roe v. Wade which, together with the 1992 Planned Parenthood v. Casey, invalidated 50 state laws and made abortion legal and available on demand throughout the United States.