Kremlin spokesman Dmitry Peskov insisted in remarks on Wednesday the scheduled meeting between President Joe Biden and counterpart Vladimir Putin would yield no significant results and “cannot become historic” or result in “any breakthroughs.”

Biden and Putin are, at press time, meeting in Geneva, Switzerland, the first in-person summit between the two since Biden became president. Biden and Putin have met in the past through the former’s decades as a senator and later vice president.

Peskov’s remarks appear in contrast to those of Secretary of State Antony Blinken this weekend, who described the upcoming meeting as “the start of testing the proposition of whether Russia also seeks a more stable, predictable relationship or not.”

“No, [the summit] cannot become historic, and one cannot and should not expect any breakthroughs,” Peskov, Putin’s official spokesman, said in an interview, according to the Russian news agency TASS. Peskov insisted the conversation between the two would “not be an easy one” and that the Kremlin expected the two to be together in private for “four to five hours.”

He nonetheless branded the event happening at all “already an achievement.”

Russian Deputy Foreign Minister Sergei Ryabkov similarly expressed pessimism in remarks prior to the meeting, according to Russian media.

“We’ve got realistic expectations. No illusions, no high expectations,” Ryabkov told reporters. “We are ready to do our part in the interest of stabilization and normalizing our relations. The question is whether the US is ready for it.”

Neither Peskov nor Ryabkov gave away many specific topics of conversation. Among the items for discussion, Peskov said, were “regional conflicts” and the coronavirus pandemic.

Blinken’s description of the topics of discussion in an interview with Andrea Mitchell of NBC News this week was similarly expansive.

“The purpose of the meeting is for the President to do two things, which he has made very clear already. It’s to tell President Putin directly that we would like a more stable, predictable relationship with Russia – and in that context there may be an ability to work on some issues where we have overlapping interests,” Blinken said, “but if Russia is going to continue to take reckless or aggressive actions against us or against any of our partners or allies, we’ll respond forcefully.” 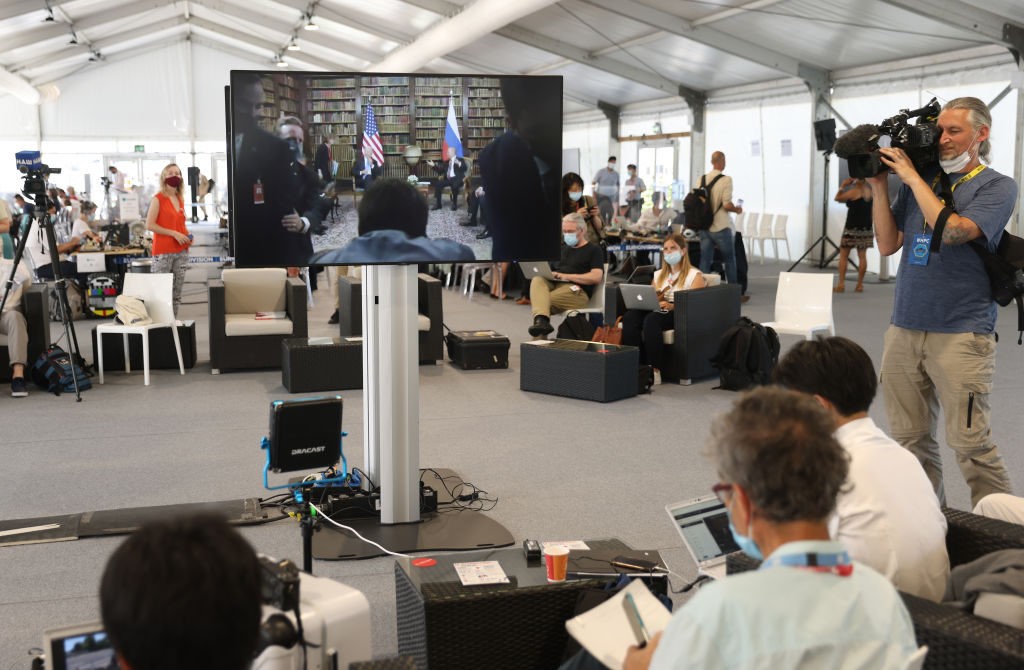 Journalists in the media center watch live as U.S. President Joe Biden and Russian President Vladimir Putin sit down for talks at Villa La Grange in Geneva, Switzerland. The two leaders are meeting at the villa today for bilateral talks that are likely to cover a wide range of issues. The meeting comes at a time when U.S.-Russian relations are particularly cool. (Photo by Sean Gallup/Getty Images)

Despite sounding somewhat more positive than the Russian officials, Blinken warned, “I don’t think we’re going to get a clear and definitive answer from one meeting.”

Peskov described signals from the Biden camp in the immediate period prior to the meeting as “positive.” Among those signals was Biden’s refusal to stand by his remark in March that Putin was a “killer,” instead effusively praising Putin as “bright” and a “worthy adversary.” Biden agreeing to the meeting at all also sent a signal to Russia that he prioritized America’s relationship with the Putin regime over ties with allies like Ukraine. President Volodymyr Zelensky of Ukraine, in an interview in which he lamented being “disappointed” by Biden’s weak stances on Russia, requested an in-person meeting with the American president prior to the latter’s meeting with Putin. Biden rejected the invitation, instead inviting Zelensky to the White House later in the summer.

Putin invaded and colonized the expansive Crimean Peninsula in Ukraine in 2014 and has exacerbated and enabled a war in eastern Ukraine between allegedly local pro-Russia separatists and Kyiv. Washington, under President Barack Obama, nominally opposed the colonization of Crimea but largely abstained from responding to it. Under President Donald Trump, the White House sanctioned Russia on multiple occasions for human rights crimes such as chemical weapons use and used sanctions to specifically target lucrative Russian projects.

Biden waived one of the most punitive sanctions Trump imposed, on Russia’s Nordstream 2 pipeline to Europe, in May, infuriating Ukraine. The pipeline would allow Russia direct sales of natural gas to countries like Germany, overriding and, thus, threatening, the Ukrainian economy.

While Biden enters the Putin meeting with a conciliatory tone, Putin offered NBC News an insult-laden interview expanding on his personal views of Biden and the United States generally, published on Monday. In it, Putin heaped praise on Biden’s predecessor Trump and dismissed Biden as a “career man.” Putin also denied Biden’s claim that he told Putin he was “soulless” in person and appeared to imply that Biden was struggling with his own masculinity.

“As far as harsh rhetoric, I think this is an expression of overall U.S. culture,” Putin said. “Of course in Hollywood … there are some deep things in Hollywood — macho — which can be treated as cinematographic art but more often than not it’s macho behavior that is part of U.S. political culture, where it’s considered normal.”

The Biden-Putin meeting is ongoing at press time.

US press asked Biden if he trusted Putin and @potus nodded yes.

Reporters again asked Putin why do you fear Navalny, and what’d you if Ukraine joined NATO. No Putin answer.

via @JonLemire (1/2 of US traveling pool didn’t get access due to Russia press and security shoving us) pic.twitter.com/SuwRDNul2z

While the two have not yet had time to engage deeply on any particular issue privately, Biden appeared to continue maintaining his friendly tone towards Putin, nodding yes when reporters asked if he trusted Putin.