Leftist network CNN reported on Sunday, citing anonymous “sources,” that President Joe Biden would announce a diplomatic “boycott” of the 2022 Beijing Winter Olympics this week – a move that would have no impact on the Games and that Chinese state media has openly mocked.

China has not publicly invited Biden or any of his officials to Beijing, however, and the Global Times, a Chinese Communist Party propaganda newspaper, has stated that a diplomatic “boycott” is impossible as the diplomats have to be invited to reject the invite. As the Times is a government mouthpiece, it often serves to relay the stances of the Communist Party in a more aggressive way than China prefers from its formal diplomats and spokespeople.

The Chinese Foreign Ministry appeared to contradict the Global Times on Monday, stating that the communist regime had invited “U.S. politicians,” without specifying, to the Games.

“The Biden administration is expected to announce this week that no US government officials will attend the 2022 Beijing Olympics, implementing a diplomatic boycott of the games, according to several sources,” CNN alleged on Sunday. “A full boycott is not expected, meaning US athletes will still be allowed to compete. The last time the US fully boycotted the Olympics was in 1980 when former President Jimmy Carter was in office.”

The Biden White House says no final decision has been made on boycotting the 2022 Winter Olympics in Beijing to protest the Uyghur genocide. https://t.co/YbvS18xJKM

The outlet claimed that officials within the U.S. National Security Council were “privately discussing” the event, without stating where that information came from, and noted that the Council itself refused to comment on the matter.

Biden confirmed last month that he was considering a diplomatic “boycott,” calling it “something we are considering.” Neither he nor anyone in his administration has made any indication that they are considering a real boycott of the Olympics.

In response, the Global Times called the potential move “no big deal” and asserted that, so long as the Chinese government does not invite an American diplomatic presence at the Games, Biden cannot use that presence to “boycott” the event.

“China never plans to invite US and Western politicians who hype the ‘boycott’ topic to attend the Games and experts said that their so-called boycott is nothing but self-deception,” the Global Times asserted in late November.

“[I]n accordance with the Olympic rules, for politicians to attend the Games they must be invited by their own countries’ Olympic committees first and the final decision relies on the International Olympic Committee (IOC).” 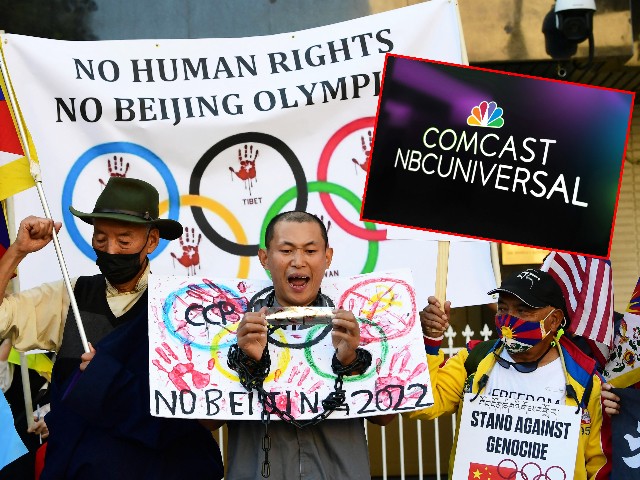 Joe Biden Biden confirmed last month that he was considering a diplomatic Beijing “boycott,” calling it “something we are considering.” (FREDERIC J. BROWN/Getty Images)

The Times noted not just that America is an adversarial nation, but that the ongoing Chinese coronavirus pandemic, which originated in the country and became a pandemic thanks to poor communist management, made inviting foreign politicians dangerous.

“It is not proper to invite foreign guests on a large scale,” the propaganda outlet stated.

Prior to that explanation, the Global Times dismissed Biden by explaining how a diplomatic “boycott” is not a boycott because nobody watches the Olympics for the politicians.

“Strictly speaking, a boycott of the Olympic Games means banning all of its country’s athletes from participation,” the Global Times observed. “‘Diplomatic boycott’ is a roughly man-made new concept by Western politicians, meaning no ban on athletes, but government officials would not attend.”

“Athletes are supposed to be the most crucial players in the Games, not political figures,” it continued at the time. “The only connection between politicians and the sporting event is they may attend the opening and closing ceremonies.”

Chinese Foreign Ministry spokesman Zhao Lijian – famous for peddling a conspiracy theory that the Chinese coronavirus originated in Maryland, not Wuhan – appeared to contradict the ongoing Global Times spin that Biden cannot boycott an event with uninvited non-guests on Monday. Zhao asserted that China had already invited an American political delegation, without elaborating.

“U.S. politicians continue to hype a diplomatic boycott of the Beijing Winter Olympics although they have been invited,” Zhao said on Monday during a regular Foreign Ministry briefing, according to Japan’s Kyodo News. The spokesman vowed “resolute countermeasures,” without elaborating, if Biden withdraws his representatives from the event. 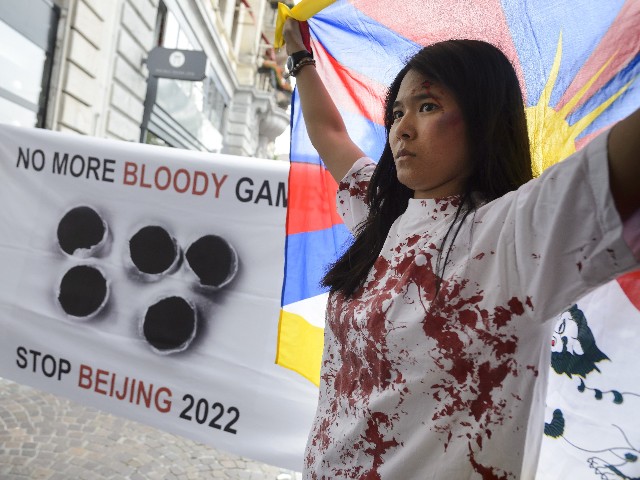 Pro-Tibet demonstrators hold a protest outside Lausanne Palace hotel where a delegation of the Beijing 2022 Winter Olympics candidate city present their bid before IOC members and the press. (FABRICE COFFRINI/AFP via Getty Images)

Reports indicated last month that dictator Xi Jinping would invite Biden personally to the Olympics during an extended video call between the two leaders, but reports indicated that he did not do so. Instead, Xi invited Russian leader Vladimir Putin to the event within the same week.

Human rights activists and victims of the Chinese Communist Party have been advocating for over a year that participants in the Olympics boycott the Beijing Games or the International Olympics Committee (IOC) postpone or relocate the event. China is one of the world’s most brutal human rights abusers, most prominently engaging in an ongoing genocide of Uyghur people and other Muslim groups in East Turkistan, an occupied region in the west of the country.

Biden’s secretary of state, Antony Blinken, formally declared the use of concentration camps, forced sterilization, and slavery in East Turkistan a “genocide” in March. Under Xi, the Chinese Communist Party has also expanded systematic human rights abuses against members of “illegal” religions, human rights attorneys, political dissidents, and anyone who in any way challenges anyone identified with the regime – most recently tennis star Peng Shuai, who disappeared after accusing a former senior official of rape.

The IOC has refused to acknowledge any of China’s human rights abuses, asserting, “we are not a world government.”