The municipal government of Beijing slapped the 7-Eleven convenience store chain with an ominous warning and roughly $23,500 in fines for violating Chinese Communist Party speech codes, including such “errors” as the “wrongful act of assigning Taiwan province as an independent country” and using Japanese names for disputed islands claimed by China.

The fines were assessed in December but not made public until a report by Nikkei Asia on Friday.

The roughly 260 7-Eleven stores in Beijing are run by a unit of Japanese retail company Seven & i Holdings. Beijing officials punished the company for referring to the “Senkaku Islands” by their Japanese name on its website. The islands are administered by Japan but claimed by China, which insists on calling them the “Diaoyu Islands.”

7-Eleven’s website allegedly also included “mistakes” in its representation of the borders for the Xinjiang Uyghur Autonomous Region, home of the brutally oppressed Uyghur Muslims, and the Tibet Autonomous Region. According to the South China Morning Post (SCMP), the “mistakes” in the Tibetan borders involved territory disputed by China and India. 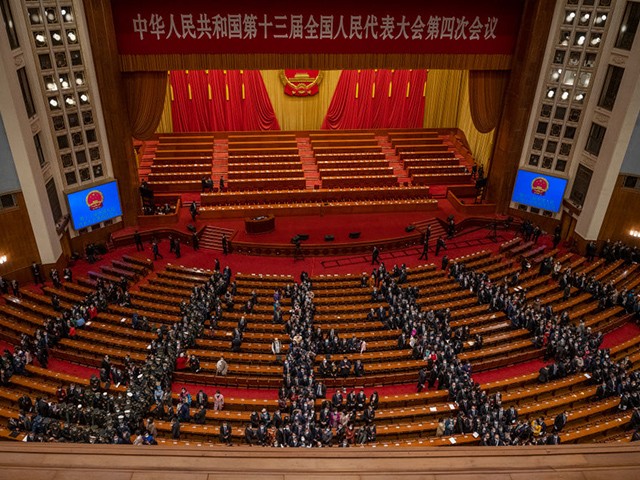 Delegates and lawmakers leave after the second plenary session of the National People’s Congress at the Great Hall of the People on March 8, 2021, in Beijing, China. (Photo by Kevin Frayer/Getty Images)

The Chinese Communist Party is particularly sensitive about any reference to Taiwan as an independent country. China frequently uses economic leverage to force foreign companies to change verbal or visual references to Taiwan on their websites that depict it as anything but a province of China. Taiwan is a sovereign state with no political ties to the government of China.

China has also forced foreign companies to change products that did not conform with Chinese Communist ideology, notoriously including a T-shirt sold by The Gap that showed an outline of China without depicting Taiwan and other islands it claims.

Nikkei Asia quoted a statement from Seven & i Holdings that “sincerely” accepted the punishment from Beijing. The company promised to “do our best to prevent a recurrence.”

Chinese Foreign Ministry spokesman Wang Wenbin addressed the 7-Eleven fine in a press conference on Friday, although he claimed not to have been aware of the story until a reporter brought it up.

“I would like to reiterate that Taiwan is an inalienable part of China’s territory and the one-China principle is a universally recognized norm in international relations and the consensus of the international community,” Wang said.