Chinese dictator Xi Jinping on Thursday called on Chinese citizens to maintain their “resolve” while Beijing undertakes a “great struggle” in future months amid an economic downturn in China, Xinhua News Agency reported.

Xi, who serves as General Secretary of the Chinese Communist Party, made the remarks during a two-day Party meeting held from July 26 to July 27 in Beijing meant to reinforce loyalty within the Party to Xi and communism generally.

“Xi called for resolve to undertake a great struggle with many new contemporary features, and readiness to work even harder toward the goal of rejuvenation,” Xinhua, China’s official state press agency, quoted the dictator as saying.

Xi’s acknowledgment that China faces an uphill battle to maintain its developmental goals came shortly before he and other Communist officials at a separate, high-level meeting of the Party’s Politburo, or top policy-making body, suggested on July 28 that China’s economy had narrowly escaped a recession in the second quarter of this year.

In the second half of 2022, China should “stabilize employment and prices, maintain economic operations within a reasonable range, and strive to achieve the best possible results,” Xinhua quoted the Politburo as saying in a statement summarizing Thursday’s meeting.

The Communist Party’s statement indicated that Beijing had lowered its economic standards from weeks earlier when China’s central government said it would strive to meet its 2022 financial growth target to expand its GDP by about 5.5 percent.

After an April Politburo meeting, state media reported that China will “work hard to realise the annual economic and social development targets.”

[…] During an inspection tour in the central city of Wuhan on June 28, Xi said China will “strive to reach a relatively good level of the economic development this year”.

The Chinese Communist Party’s Politburo press release on July 28 regarding its economic agenda meeting earlier that day additionally included an instruction that “large provinces must take lead in growing China’s economy, and those in a position to achieve their economic goals should do so [sic],” according to Xinhua.

The Wall Street Journal on Thursday suggested that this directive served as “an implicit acknowledgment” that other provinces would miss their economic benchmarks.

“Few economists expect China to meet its official goal of about 5.5% expansion of gross domestic product this year, especially after Beijing announced second-quarter growth of just 0.4% compared with a year earlier,” the U.S.-based business newspaper noted.

China’s stubborn adherence to a strict “zero tolerance” policy toward the Chinese coronavirus — which saw all of Shanghai shut down for 65 consecutive days from March 28 to June 1 to contain a local outbreak of the disease — has alarmed observers, many of whom accurately predicted that the anti-epidemic strategy would inhibit China’s economic growth this year. 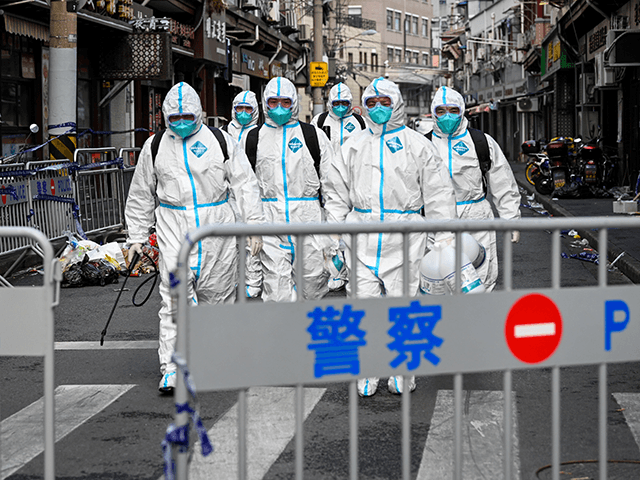 Health workers in protective gear walk out from a blocked off area after spraying disinfectant in Shanghai’s Huangpu district on January 27, 2021. (Photo by STR / AFP) / China OUT (Photo by STR/AFP via Getty Images)

Shanghai’s lockdown was especially significant because it occurred in the top financial hub of China, which is the world’s second-largest economy. The edict halted production across most Shanghai businesses and manufacturing plants, including those run by dozens of top multinational companies. Shanghai’s manufacturing production freeze affected not only China but the greater world, as the metropolis houses the globe’s busiest shipping container port.

The ripple effects of Shanghai’s two-month lockdown thus caused interruptions to the flow of the global supply chain that continue today. The lockdown’s negative repercussions have reportedly discouraged foreign investors from pursuing business with China in recent weeks.

China’s central bank betrayed internal distress on April 18 when its administrators unceremoniously froze millions of dollars in deposits across several of the bank’s rural branches in Henan and Anhui provinces. The People’s Bank of China issued a statement at the time of the fund freeze in which it claimed that the action was tied to the bank “upgrading internal systems.” The financial institution failed to elaborate on the development.

Many bank clients affected by the mass deposit seizures attempted to withdraw their funds from various branches of China’s central bank in the ensuing weeks. The efforts were repeatedly thwarted by People’s Bank of China officials, who on at least two occasions abused a Chinese government health code system restricting the movements of people who test positive for the Chinese coronavirus. The action prevented bank clients from traveling to relevant branches to try and withdraw their funds and ultimately inspired the spurned customers to organize a mass protest against the deposit freezes on July 10.

Nearly 1,000 people gathered that day outside a branch of the People’s Bank of China in Zhengzhou, Henan, to call for the bank to release the frozen funds. Local police officers and bank-related security personnel used heavy hands to crack down on the demonstration, with numerous participants telling the Associated Press and Reuters that they were minorly injured by security forces.

Another example of Beijing’s flagging economy presented itself in mid-July when Chinese state regulators admitted that more than 100 delayed housing projects nationwide had reported mortgage defaults in recent days. The development sparked weeks prior when a number of people across China refused to pay mortgages on unfinished homes. The homebuyers said they were withholding payments as a form of protest against general delays and setbacks in Chinese housing construction.