Semiconductor Manufacturing International Corp. (SMIC), China’s top maker of computer chips, said on Thursday its factories in Shanghai have resumed production under a “closed-loop system” that has about 60 percent of the staff sleeping at the factory to comply with Shanghai’s grueling coronavirus lockdown.

SMIC said in a post on China’s Weibo social media platform that it began implementing the closed-loop system on March 1 at its plant in the Zhangjiang district. The company said production is running at fairly normal levels in the sealed plant.

Shanghai officials on April 15 prepared a “white list” of 666 enterprises that would be allowed to resume operation during the lockdown using closed-loop management systems. About 70 percent of the companies on the white list have reportedly taken the city’s offer.

SMIC is one of the largest and most important companies on the list since it is key to achieving China’s goal of self-sufficiency in computer chip supply. Another is Elon Musk’s Tesla electric car company, which has a huge “gigafactory” in Shanghai.

Supply chains across China and around the world are imperiled by the Shanghai lockdown. Some analysts expressed disappointment that only 70 percent of the companies on the closed-loop whitelist decided to resume operations, given the strain placed on numerous supply chains. 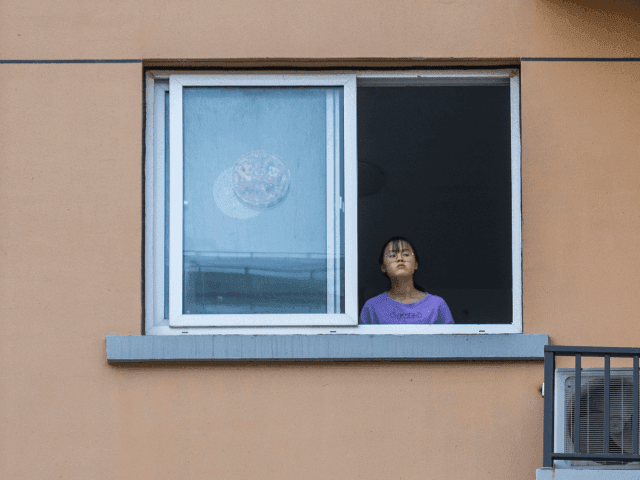 A girl looks from a window in a residential area in on April 12, 2022, in Shanghai, China, as the city is in its fourth week of lockdown. (Getty Images)

Some Shanghai residents told foreign media they were reluctant to enter a closed-loop work system because they feared getting trapped inside the factories and denied permission to return home to visit their families for an unknown length of time.

Most of Shanghai’s 26 million residents remain confined to their homes after four weeks of coronavirus lockdown. The imprisoned population has developed sophisticated crowdsourcing operations to help each other find food, medicine, and other supplies. A decline in infections over the past few days raised hopes that the lockdown might soon be lifted.