China’s state-run Global Times claimed on Tuesday that Western media was unnecessarily “hyping” protests by roughly 1,000 people in Zhengzhou, China, on Sunday in which participants demanded several rural banks release millions of dollars of deposits after unceremoniously freezing them in April, ignoring the fact that Chinese security personnel physically abused and injured several demonstrators during the rally.

The Chinese Communist Party-controlled newspaper’s editors the following on July 12:

Chinese experts on Tuesday refuted recent Western media hype over problems with four rural banks in Central China’s Henan Province that have sparked widespread attention as well as swift regulatory actions, noting that the cases are “isolated” and do not represent any nationwide systemic risk and China has the capability to prevent major financial risks after years of efforts to set up a multiple-layered financial risk aversion mechanism.

An estimated 1,000 people participated in a rally outside the Zhengzhou branch of China’s central bank on July 10 to demand the bank release millions of dollars in deposits that were frozen without explanation in April. Several people told various media outlets, including Reuters and the Associated Press (AP), that they were physically assaulted by security personnel associated with the bank and police officers while demonstrating on Sunday.

Bank runs are happening all over China. It’s important to note that the Chinese banking system represents 350% of Chinese GDP (on balance sheet) while the U.S. system is only 100%. One of the largest lending categories of Chinese banks is real estate…Chinese property 1/3 https://t.co/OOcpu078Zb

Reuters published video footage of Sunday’s protest showing security personnel using a heavy hand to quell the bank rally in Zhengzhou, which is the capital of China’s Henan province. The video clip showed demonstrators standing outside the Zhengzhou branch of the People’s Bank of China on Sunday holding posters that read, “No deposit, no human rights” and “Against the corruption and violence of the Henan provincial government.”

The recording further captured various skirmishes that broke out between ralliers and security personnel. Authorities attempting to contain the protest urged the crowd to disperse via loudspeaker announcements, reportedly including the following message, “Your actions have been deemed as illegal. Leave in 10 minutes. If you do not heed instructions from staff on site, if you do not leave and if you continue to disrupt society, the police will take stern action.”

“Multiple protesters told the AP that some people were hospitalized after being hurt when police and plainclothes security officers used force to disperse the protesters, though most of the injuries were scrapes or cuts,” the news agency reported on July 12.

People in China affected by the central bank’s decision to freeze millions of dollars in deposits in April have attempted to withdraw their deposits for months, with the effort culminating in Sunday’s roughly 1,000-strong protest in Zhengzhou. 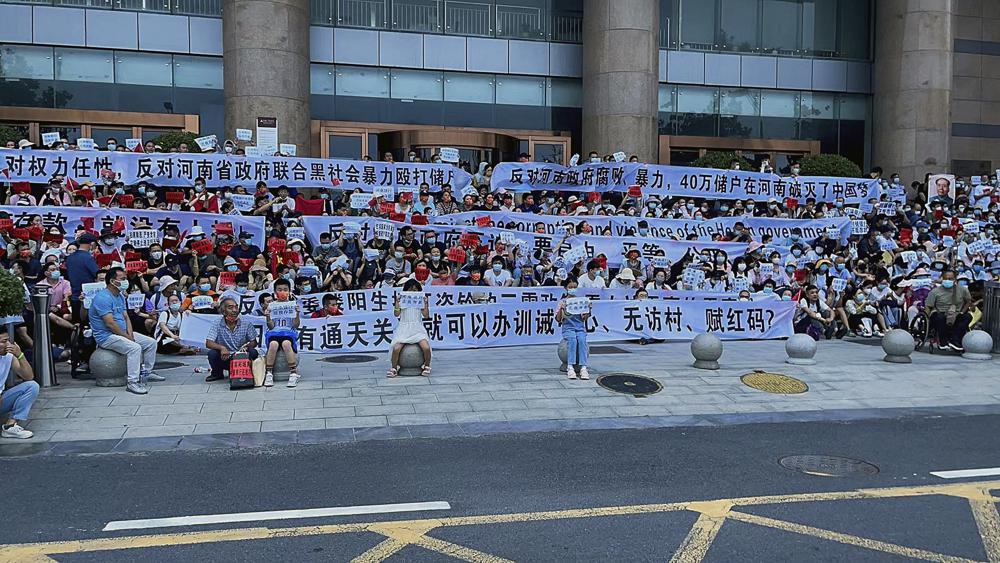 In this photo released by Yang on Sunday, July 10, 2022, people hold banners and chant slogans during a protest at the entrance to a branch of China’s central bank in Zhengzhou in central China’s Henan Province. A large crowd of angry Chinese bank depositors faced off with police Sunday, some reportedly injured as they were roughly taken away, in a case that has drawn attention because of earlier attempts to use a COVID-19 tracking app to prevent them from mobilising. (AP Photo/Yang)

A number of affected bank clients tried to travel to Zhengzhou in mid-June to withdraw their frozen deposits. Authorities in charge of China’s central bank illegally halted their effort, abusing a government health code system by turning the codes of relevant clients “red” so that they were unable to visit the bank, despite the fact that the individuals affected were not, in fact, at higher risk of spreading Chinese coronavirus. The bank’s authorities illegally changed some clients’ health codes “red” again on July 8 after learning that more people were attempting to retrieve their frozen deposits in Henan.

The Global Times confirmed the incidents on July 8, writing:

Some depositors of small rural banks, registered in Henan Province and reportedly caught in illegal fundraising, found their health codes turned red for unknown reasons when they tried to arrive in Henan to withdraw their money, prompting suspicions of abuse of the health code system in the province.

Later investigation by discipline authorities found officials of provincial capital Zhengzhou’s epidemic prevention and control headquarters made the decision without authorization and asked a big data firm to conduct the change.

It was estimated that 1,317 clients with savings in the rural banks had their health codes changed and five officials were punished after the discipline inspection.

Representatives of China’s central bank issued a series of statements late Monday claiming that “customers with deposits of 50,000 yuan (about $7,400) or less would be reimbursed. They said others with larger bank balances would get their money back at a later, unspecified date,” the AP reported on Tuesday.

“They made this announcement because we put our lives on the line. This less than 50,000 yuan isn’t what we are owed. It’s more a payment to keep social stability,” an affected bank client surnamed Ding told the news agency.

Ding said that she and her husband were “hit by plainclothes security staff” while participating in the protest outside the Zhengzhou branch of the People’s Bank of China on July 10.