Zimbabwe’s government last week blamed recent gatherings by members of the country’s various Apostolic sects for an ongoing outbreak of measles that has killed 80 children nationwide since April, Reuters reported on Sunday.

After reviewing an official Zimbabwean government statement on August 14, the news agency relayed:

Health Secretary Jasper Chimedza said that as of Thursday [August 11], 1,036 suspected cases and 125 confirmed cases had been reported since the outbreak, with Manicaland in eastern Zimbabwe accounting for most infections.

“The ministry of health and child care wishes to inform the public that the ongoing outbreak of measles which was first reported on 10th of April has since spread nationwide following church gatherings,” Chimedza said in a statement. “These gathering which were attended by people from different provinces of the country with unknown vaccination status led to the spread of measles to previously unaffected areas [sic].”

Manicaland, the second-most populous province, had 356 cases and 45 deaths, Chimedza said. Most reported cases are among children aged between six months and 15 from religious sects who are not vaccinated against measles due to religious beliefs, he added.

Chimedza referred to members of Apostolic sects, which are types of religious organizations present not only within Zimbabwe but also in neighboring South Africa.

Zimbabwe’s Apostolic sect community “is not a homogenous religious entity, and therefore Apostolic religion comprises of several sects, and each with different interpretations of Apostolic teachings and practices,” according to a 2011 report by the United Nations (U.N.). “Others base their teachings and practices on the Bible, founders’ philosophy and doctrine, ‘revelation from and of the Holy Spirit’ or Mweya, mixture of beliefs including some aspects of African culture and religion, and modernity [sic].”

Apostolic sect leaders often discourage their followers from using modern medicine, resulting in a low vaccination rate among the community.

Reuters noted on Sunday that “Andby Makuru, leader of Johanne Masowe apostolic sect,” did not respond to the news agency’s request for comment on Harare’s blaming of the Zimbabwean Apostolic community for the nation’s latest measles outbreak.

The U.N. in its 2011 report identified the Johanne Masowe sect as among the “ultra-conservative” Apostolic subgroups that reject “modern healthcare-seeking.” 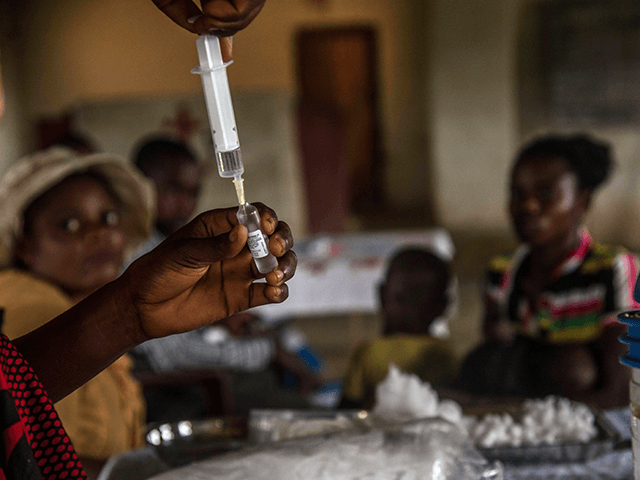 Children wait to be registered before a measles vaccination at a centre in Mbata-Siala, near Seke Banza, western DR Congo on March 3, 2020. (Photo by JUNIOR KANNAH/AFP via Getty Images)

“With a low vaccination rate and in some cases, no record keeping, the government has resolved to start a mass vaccination campaign in areas where the outbreak was recorded,” Reuters noted on August 14 of the Zimbabwean government’s response to its latest measles epidemic.

“The measles outbreak is expected to strain an ailing health sector already blighted by lack of medication and intermittent strikes by health workers,” according to the news agency.

Zimbabwe’s socialist government is itself hugely responsible for a general lack of health care across the southern African nation. Decades of corruption and mismanagement under the socialist Zimbabwe African National Union-Patriotic Front (ZANU-PF) — the only ruling party Zimbabwe has known since it gained independence from Britain in 1980 — has run the country dry of nearly all financial resources. Zimbabwe has long been one of the world’s most impoverished nations, with the U.N. describing its lack of food in 2019 as a tragic example of “man-made starvation.”