A couple weeks ago, House Member Eleanor Holmes Norton made a fundraising call to a lobbyist. The lobbyist wasn’t available, so Holmes Norton left a voicemail.

We have been given a copy of that message. The audio is below. 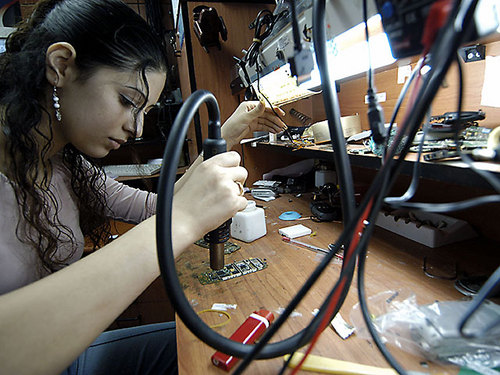 By way of background, with their prospects for November quickly deteriorating, Congressional Democrats are scrambling to assemble the financial resources they hope can stave off their electoral armageddon. Speaker Pelosi and her leadership team are putting a lot of pressure on Democrat members to pony up campaign contributions to the Democratic Congressional Campaign Committee. In the article linked above, Politico noted:

In August, Pelosi and other top leaders wrote members, saying, “We need to know your commitment is to maintaining a strong Democratic majority now” and pleading with them to call “to let us know what you are able to do and when.”

The pressure is especially strong on members from “safe” districts, who need little campaign money of their own to win reelection. The catch, though, is that many of these members haven’t amassed vast campaign war-chests, for the simple reason that they haven’t needed them. So, they are scrambling to meet their Pelosi-imposed obligations. Holmes Norton is from one such “safe” district–the District of Columbia.

In the following voicemail recording, Holmes Norton seeks a campaign contribution from the lobbyist and even mentions that she hadn’t previously asked for a donation. Such is the pressure Speaker Pelosi has placed on the members. But, it is the content of Holmes Norton’s message that is interesting. (Note: the first few seconds of the recording, where the name of the lobbyist is said by Holmes Norton, have been redacted by the source.)

Her message raises many concerns.

1. At the very beginning of the message, Holmes Norton notes that the lobbyist:

Beyond being a bit heavy-handed, where did she get this information? Such donations are listed in FEC reports, but it is a violation to use that information to solicit campaign donations.

2. More serious, however, is her frequent mention of her seniority and her Chairmanship of a subcommittee. She is attempting to solicit funds based on her past actions taken in her official capacity in Congress. She is implying to the lobbyist that, should he decline to donate, he will be turning down a senior member of Congress who Chairs a subcommittee highly relevant to his “sector”.

3. Worse than that, she details her role overseeing a large economic development project in the District, funded by “stimulus” funds. It would appear that either the lobbyist has an interest in this project, or the Congresswoman thinks he does, as she states she is “frankly surprised” the lobbyist hasn’t given to her. Especially, she notes, because of her

“In your sector.” This raises additional concerns, and we note potentially relevant laws here:

She who promises, directly or indirectly, any government contract or other government benefit (provided for or made possible by any Act of Congress) as a reward for a political contribution shall be guilty of a misdemeanor (18 U.S.C. 600).

She who attempts to cause anyone to make a political contribution by denying or threatening to deny any government payment or other government benefit (provided for or made possible, in whole or in part, by any Act of Congress) shall be guilty of a misdemeanor (18 U.S.C. 601).

p. 150: “[A] Member may not accept any contribution that is linked with an action that the Member has taken or is being asked to take. A corollary of these rules is that Members … are not to take or withhold any official action on the basis of the campaign contributions or support of the involved individuals …. Members … are likewise prohibited from threatening punitive action on the basis of such considerations.”

4. We don’t know from where she made this call, but it is a relevant inquiry. It is, after all, illegal to solicit campaign funds on federal property.

As Holmes Norton repeatedly notes on the call, she is a senior member of Congress. She knows or should know all of this. First elected to Congress in 1990, she took her law degree from Yale University and clerked for U.S. District Court Judge Leon Higginbotham before working as an assistant legal director at the ACLU, law professor at NYU, Chairman of the NYC Human Rights Commission, and Chairman of the EEOC. She is a tenured law professor at Georgetown University and serves on the boards of three Fortune 500 companies.

That a Member like Holmes Norton would leave the foregoing voicemail message must be a testament to the kind of pressure Speaker Pelosi has put on her members. Indeed, she acknowledges this in the call:

As the senior member of the um, committee and a sub-committee chair, we have (chuckles) obligations to raise, uh funds. And, I think it must have been me who hasn’t, frankly, uh, done my homework to ask for a contribution earlier. So I’m trying to make up for it by asking for one now, when we particularly, uh, need, uh contributions, particularly those of us who have the seniority and chairmanships and are in a position to raise the funds.

Note: Beginning this morning, we made several attempts throughout the day to contact Holmes Norton’s office. At least two email requests for comments were sent to the Congresswoman’s Communications Director. Three phones calls and messages were also left. None of these were returned. We made clear we were on deadline, but we held the story for almost an entire day to give Holmes Norton’s office a chance to respond. If we receive a response from her office, we will update the post.

Below is the full transcript of the call:

This is, uh, Eleanor Norton, Congresswoman Eleanor Holmes Norton. Uh, I noticed that you have given to uh, other colleagues on the Transportation and Infrastructure Committee. I am a, um, Senior Member, a twenty year veteran and am Chair of the Sub-committee on Economic Development, Public Buildings and Emergency Management. I’m handling the largest economic development project in the United States now, the Homeland Security Compound of three buildings being built on the uh, old St. Elizabeth’s hospital site in the District of Columbia along with uh, fifteen other, uh, sites here for, that are part of the stimulus .

I was, frankly, uh, uh, surprised to see that we don’t have a record, so far as I can tell, of your having given to me despite my uh, long and deep uh, work. In fact, it’s been my major work, uh, on the committee and sub-committee it’s been essentially in your sector.

I am, I’m simply candidly calling to ask for a contribution. As the senior member of the um, committee and a sub-committee chair, we have (chuckles) obligations to raise, uh funds. And, I think it must have been me who hasn’t, frankly, uh, done my homework to ask for a contribution earlier. So I’m trying to make up for it by asking for one now, when we particularly, uh, need, uh contributions, particularly those of us who have the seniority and chairmanships and are in a position to raise the funds.

I’m asking you to give to Citizens for Eleanor Holmes Norton, PO Box 70626, DC, 20024. I’ll send you a follow-up note with appreciation for having heard me out. Thanks again.