Last night, minutes before President Obama spoke, at least one of your Founding Bloggers tweeted the following:

@presidentobama please rise to this moment and be non-political. That would hit a home run 4U. More important, it would help heal the nation

He did just that. He didn’t get political except to repudiate those who have tried to assign blame. He was very presidential and healing in this moment, and despite the fact that we think he is leading a tremendously destructive Democratic-Socialist revolution, it’s still nice to see him do the right thing at the right time. We wish he were always like that….and that he weren’t leading a Democratic-Socialist revolution.

One portion from the President’s comments really stood out from all others, and they are worth highlighting:

And I believe that for all our imperfections, we are full of decency and goodness, and that the forces that divide us are not as strong as those that unite us. (Applause.)

That’s what I believe, in part because that’s what a child like Christina Taylor Green believed. (Applause.)

Imagine — imagine for a moment, here was a young girl who was just becoming aware of our democracy; just beginning to understand the obligations of citizenship; just starting to glimpse the fact that some day she, too, might play a part in shaping her nation’s future. She had been elected to her student council. She saw public service as something exciting and hopeful. She was off to meet her congresswoman, someone she was sure was good and important and might be a role model. She saw all this through the eyes of a child, undimmed by the cynicism or vitriol that we adults all too often just take for granted.

Mr. President, that is sincerely inspirational. This was your finest speech. But speeches tend to be your forte, while your follow-through has been widely criticized.

Mr. President, and all politicians, please live up to Christina’s expectations and follow through on these important words. You knocked it out of the park yesterday. Now you just need to run the bases.

An easy place to start would be for all politicians to condemn the organizers of the 2008 RNC protest-riots. These community organizers planned openly to shut down a legitimate and peaceful political convention. In other words, they premeditated to deny American citizens their civil rights. What could be more divisive than that?

Here is a published program from a planning conference held in February 2008 (7 months before the convention!) wherein groups like AFSCME, and the Teamsters got together with CodePink, International ANSWER, Freedom Road Socialist Organization, Students for a Democratic Society, Arab American Action Network, Palestine Solidarity Group, and a dangerous group of “arrestables” called the RNC Welcoming Committee, got together to discuss how to shut down the civil rights of the Republican party:

In the video below, the RNC Welcoming Committee imply threats to use Molotov cocktails and other violence against the Republican convention.

Here is but some of the very real violence these planning sessions led to (h/t Atlas Shrugs): 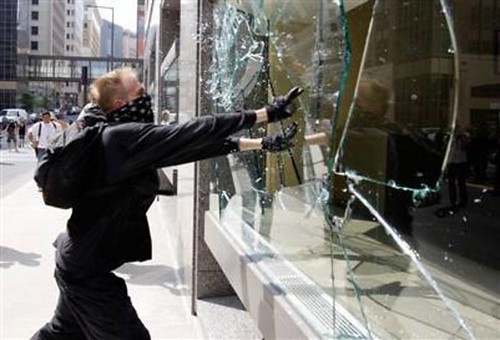 Live up to her expectations, Mr President. Condemn these forces that divide us.