President Barack Obama and his fellow Democrats face in 2012 running for reelection into the stiff headwind of a terrible economy – largely of their own making. 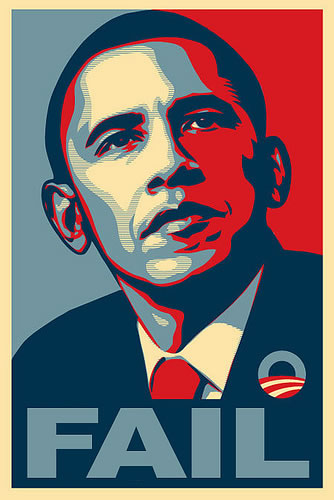 In just the last four years, the federal government – run by a Democrat Congress since 2007, and adding a Democrat President in 2009 – has increased spending by 29%.

Note: This was the last all Republican budget – the House, Senate and White House were at the time all run by the Rs.

Note: This is an estimated total. Because the Democrats that were at the time running the House, Senate and White House didn’t write a budget – because they were afraid to go on the record with how much they actually wanted to spend in advance of the 2010 election.

Meaning – it could have been WORSE.

That is a $1.09 trillion increase – in just the last four years.

And the resulting Age of Bailout economy has been – atrocious.

Thusly, Democrats are seeking to rewrite recent history – and the present – in terms far more favorable to them than Reality to assist them in their re-electoral pursuits.

Much as our entire Left-Liberal cultural nexus – our government (i.e. public) schools, the Leftist PlayLand colleges and universities and the Hollywood-Media Corridor – have rewritten the histories of the first two Ages of Bailout.

Where too the government robbed the private sector of gobs and gobs of money so as to then spend it in at best meaningless – and at worst ruinous – ways. Destroying the Village it takes in a pitiful attempt to save it.

It didn’t/hasn’t worked for FDR and LBJ, and – shocker – it ain’t working now.

Nevertheless, President Obama has decided to make the federal government’s bailout of General Motors (GM) and Chrysler – to which he and his Administration were by far the largest kicker of the $80 billion – a central theme of his 2012 push to keep his gig.

He has already repeatedly asserted that this government intrusion into the private sector – the picking and propping up of these auto-making losers at the expense of the nation’s winners – is a quintessential visual aide for what he has accomplished in his first term. And for why he deserves a second.

On the former, we wholeheartedly agree – the auto bailout is the epitome of the accomplishment of failure that is President Obama and his fellow Democrats in action.

As just stated, (intellectually honest) historians will look back on the four years between the 2006 and 2010 elections as the nation’s third Age of Bailout.

Yes, the beginning of the economic fall and the Democrat Congress’s terrible Troubled Asset Relief Program (TARP) preceded (and helped usher in) the Obama Era.

But the Donkeys – once in control of both Houses and La Casa Blanca in 2009 – kicked into overdrive the amount, level and degree to which the D.C. Leviathan was commandeering control of the private sector.

And thusly did they firmly ensconce us in a non-recovering, bottom-bouncing, much-more-interminable-than-historically-normal, jobless “recovery.”

And thusly did they grow mightily the nation’s annual deficit. The largest President George W. Bush single-year shortfall was about $400 billion. President Obama & Co. have been around $1.5 trillion every single year.

To paraphrase Ronald Reagan – from his 1980 campaign to save us from the now eerily familiar Jimmy Carter:

Behold the Third Age of Bailout:

Obama and the Democrat Congress in early 2009 forced We the People to spend nearly $1 trillion on the utterly fatuous Keynesian economic “stimulus” cash dump. A titanic waste – which President Obama and myriad others who favored and implemented it are now begrudgingly admitting, now that its utterly predictable – and predicted – failure has come to pass.

President Obama devoted nearly $60 billion of his stimulus package to building a new green-based economy rich in renewable energy and strategies to cut carbon. But despite the price tag, not one green job yet exists. It comes down to a problem of etymology. No one can yet agree on what a green job actually is.

We had the Congress and the President pitifully attempt a health care bailout – taking over the world’s greatest health care system via the now 1,500+-waiver-riddled-because-it’s-grossly-damaging-and-expensive ObamaCare.

The Democrat Congress couldn’t bail out the unions by passing Card Check – so Obama’s Administration did so by enforcing it as if it did.

With TARP, the federal government bailed out their buddy banks and Wall Street firms in true crony capitalism style.

And it was through TARP that the Obama Administration heaved even more money at General Motors and Chrysler (which also served as yet another union bailout).

So let us again take a brief look at President Obama and the Democrats’ definition of success – of the Age of (Car) Bailout, and their foisting it upon us.

GM has some work to do before it can regain a good reputation fleet-wide. Four GM-made vehicles-the Cadillac Escalade, Chevy Tahoe Hybrid, Chevrolet Colorado, and Chevrolet Aveo/Aveo 5-are ranked as among the worst on the market today. All but the Tahoe Hybrid qualified for the Worst Cars list last year as well.

Please remember all of this – these serial, unmitigated disasters tumbling over and over one another – as the Age of Bailout is rewritten by President Obama, his Democrat colleagues and his Leftist and media minions – as a “success.”

One they claim is so great that the President deserves next year to be returned to Washington – with newly ensconced Donkey Congressional majorities.

Ummm, no. We have already spent far too much in the rewarding of failure.