“So we don’t need to worry about alien teRrorists,” Lerner wrote in an email about right wing radio shows. “It’s our own crazies that will take us down.”

The new emails were released by House Ways and Means Committee Chairman Dave Camp in a letter to Attorney General Eric Holder.

Later Lerner wrote that “maybe we are through” as a country “if there are that many assholes.”

“Well you should hear the whacko wing of the GOP,” the recipient of Lerner’s email replied, criticizing conservatives for buying and storing food and ammunition while complaining about illegal immigrants.

“This email shows that Ms. Lerner’s mistreatment of conservative groups was driven by her personal hostility toward conservatives,” Camp writes in his letter to Holder. “This new evidence clearly demonstrates why Ms. Lerner not only targeted conservatives, but denied such groups their rights to due process and equal protection under the law.” 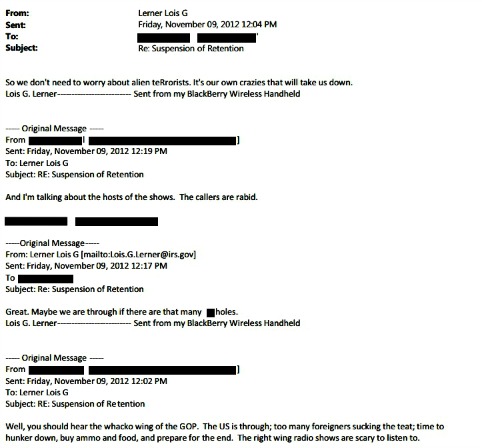