Just days prior to the ruthless beheading of an innocent woman at the hands of Oklahoma jihadist Alton Nolen, his Imam, Imad Enchassi, garnered international attention after claiming that Muslims–even Muslim children–who resided in Oklahoma were under constant threat of literally having their heads chopped off. 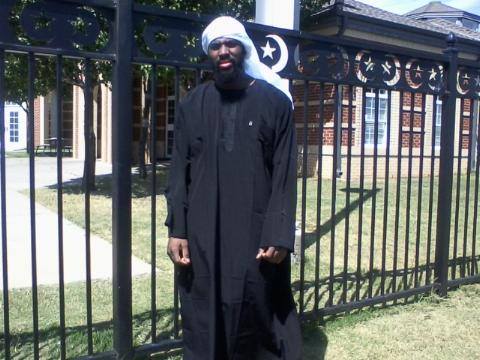 Alton Nolen standing at the gates of the Islamic Society of Greater Oklahoma City, where Imad Enchassi is the Imam, or leader of the congregation (Credit: Facebook)

Imam Enchassi said in an interview about the threats he allegedly received: “We’re going to chop your head off. We’re going to burn your mosque. We got specific threats of beheading Muslims in the state. Beheading children.”

The alleged threats supposedly came after Oklahoma State Representative John Bennet described Islam as a “social political system that uses a deity to advance its agenda of global conquest.” He continued,” That’s exactly what ISIS is doing right now, and people that follow Islam are and will do the same thing.”

Imam Enchassi continued, describing how now was the worst of times for Muslims in Oklahoma. He said, “This is a first for us in this state,” describing the threats he said he received. “I just go on my Facebook page and tell them to stand in line,” he joked.

The Imam said of his fellow Muslims’ children: “Yesterday, our children did not go play outside in the entire state of Oklahoma, we’re on a high rate of alert. We contacted the FBI.”

The FBI’s most recent data on hate crimes show that the victims of religiously-motivated attacks are overwhelmingly carried out against members the Jewish faith, who are victims of 62.4 percent of nationwide hate crimes. Victims of an anti-Islamic bias stood at 11.6 percent of the 1,340 documented anti-religious hate crimes.

Enchassi, who consider himself a perpetual “third generation refugee” of Palestine who grew up in Beirut, Lebanon, last month accused America of “creating more terrorists” because of its Middle East policy. He has described the recent 50-day war between Israel and terror group Hamas as “ethnic cleansing” on the part of the Israelis.