Charting President Obama’s relationship with the media that passively-aggressively adores him is tricky.  More than once, he’s seemingly angered or dismayed them enough to trigger a paradigm shift, only to have the paradigm slip right back to the usual worship of a titan striding across history.

The media might admit he’s made a mistake now and then — no, wait, make that a “less than optimal decision” — but he still gets endless credit for good intentions and towering intelligence.  It’s no surprise that even a small stumble from a titan makes the earth shake, right?

With that history in mind, let us be careful about looking at the rapidly deteriorating status of Obama’s “kinetic action” against the Islamic State, the hapless response of a spin-obsessed White House, and concluding that the media has finally realized Barack Obama has no idea what he’s doing.  Liberals are clearly disturbed by what they’re seeing, and perhaps they’re starting to worry that the mess in the Middle East will irreparably tarnish Obama’s legacy, especially if Republicans win the White House in 2016 in an election significantly influenced by foreign policy.  They haven’t quite fallen out of love with Obama, but they’re trying to get his attention and let him know he can’t spin ISIS off the front pages by chirping that his non-war strategy is working out great, and pretending “climate change” is the great enemy faced by the U.S. military, while the Islamic State is knocking over cities in three different countries.

Yes, three.  They’re doing quite well in the bloody disaster Barack Obama and Hillary Clinton made of Libya.  Moammar Qaddafi’s hometown of Sirte fell to ISIS in the same week they took Ramadi in Iraq and Palmyra in Syria, as well as announcing themselves in Saudi Arabia with a suicide-bomb atrocity at a Shiite mosque.

Friday’s front page at the Huffington Post was a Chernobyl-level Obama foreign-policy meltdown entitled “ISIS on the Rampage,” and they didn’t even get around to mentioning Libya: 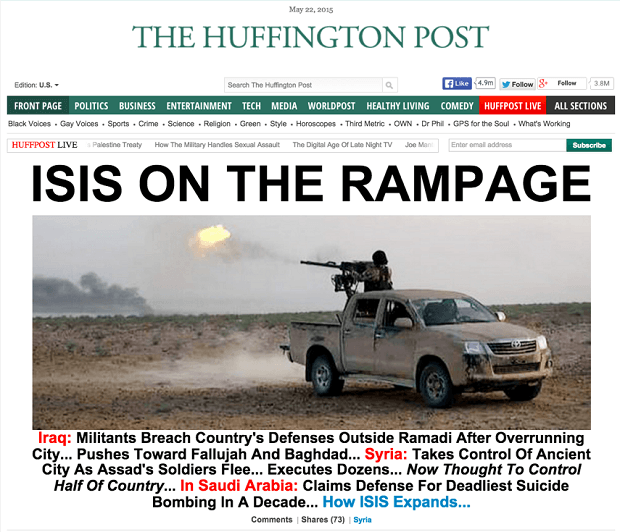 No one on the left really wants to publish headlines that say “ISIS on the Rampage,” nine months after Obama declared non-war against the caliphate.  They’re ignoring clear signals from the White House that they’re supposed to downplay these developments as “minor setbacks,” to use the new favorite phrase of the president and his spokespeople.

Their other favorite talking point involves referring to the current stage of the anti-ISIS effort as a “degrade phase,” which is some Catch 22-level nonsense when the enemy is aggressively expanding, taking major cities, and enveloping the capital of the Iraqi government we’re trying to defend.

White House Press Secretary Josh Earnest claims Obama’s new as-I-have-always-said position is that we’re nine months into “a 36-month military operation that will be in the degrade phase,” and he has been “candid about the fact that this will be a challenge that the next president will have to confront.”

That most certainly is not what we were told when Obama was dragged, very literally, off the golf course to avert genocide against the Yazidis and respond to the beheading of American hostages by the Islamic State.  It’s not cool for Obama to leave his successor “confronting the challenge” of Baghdad littered with decapitated corpses, or maybe even Tripoli.  The Islamic State is touting its string of victories as successful defiance of the degrade-phase Western superpower, and a disturbing number of recruits across the Middle East, Europe, and the United States are listening.

The media knows it can’t sell an “all is well” message with ISIS on the march, across at least three fronts, maybe four if they can destabilize Saudi Arabia.  This week’s headlines are, in part, an effort to get the famously media-obsessed Obama Administration’s attention and let them know this is more than a minor media glitch to be patched with a fresh download of talking points.

The press is still trying to help their beloved president, of course.  The recent obsession with slamming every Republican candidate up against the wall and demanding to know what they’d do about the Iraq War if they had a time machine is, in part, a pre-emptive strike against 2016 candidates accurately noting that Obama and Hillary Clinton threw away America’s gains in Iraq and blinded themselves to the rising threat of both ISIS and the rapidly regenerating hydra of al-Qaeda.  (Clinton probably didn’t anticipate one result of this week’s release of a heavily edited chunk of her long-hidden emails would be even friendly media remarking on her absolutely shocking ignorance of the degenerating situation in Libya circa 2012, following a war she wanted more than Obama did.)

And while some reporters fly air cover against the Republican presidential horde, other outlets are busy lining up scapegoats to take the fall for all those cities falling.  “Pentagon Rhetoric About Ramadi’s Fall Risks U.S. Credibility,” said the headline at Time on Thursday, riding above an article that doesn’t mention the Pengaton’s boss or his rhetoric at all… until the final paragraphs explain that Obama has “restricted their efforts to areas well behind the front lines” and ruled out the small U.S. ground force our top commanders think could wipe ISIS out, due to his extreme political “aversion to casualties.”

How can anyone suggest the Pentagon’s press statements are the problem here, when they’re only trying to work within both operational and rhetorical parameters imposed by the White House?  Yes, Marine Brigadier General Thomas Weidley declared “we firmly believe [ISIS] is on the defensive throughout Iraq and Syria” literally the day before the enemy sacked Ramadi, routing a superior Iraqi force and collecting American equipment they abandoned.  General Weidley and his colleagues aren’t responsible for that absurd disconnect between rhetoric and reality.  President Obama is.

Unfortunately, Obama’s rules of engagement are very clear to the enemy as well.  They’ve sent the message to all who would oppose them that resistance to ISIS means agonizing torture and death, while Obama’s support counts for little.  Iran is sending the message that if you want serious muscle to beat back the Islamic State, you talk to them… as even the government in Baghdad is doing now, with the express support of the Obama Administration.

While Obama’s munchkins were telling gobsmacked reporters that Ramadi’s fall was a minor setback, Iraq’s deputy prime minister, Saleh al-Mutlaq, was telling a World Economic Forum meeting in Jordan that it was a “big disaster,” and the “capacity of the Iraqis is very limited” to push back against Islamic State forces.  That’s not a hiccup or a quirk of some strategic “degrade phase,” it’s the complete and total failure of Obama’s anti-ISIS policy.