If you’re one of the 600+ students living in Ogg Hall at the University of Wisconsin-Madison, you’ve noticed a bulletin board near the first floor elevators. It wasn’t the board’s colorful design and cutouts that has caused a stir the campus community, it was one of the flaps on the interactive educational piece which defined the term “heterosexual privilege” as “benefits automatically derived from being or being perceived as being heterosexual.” 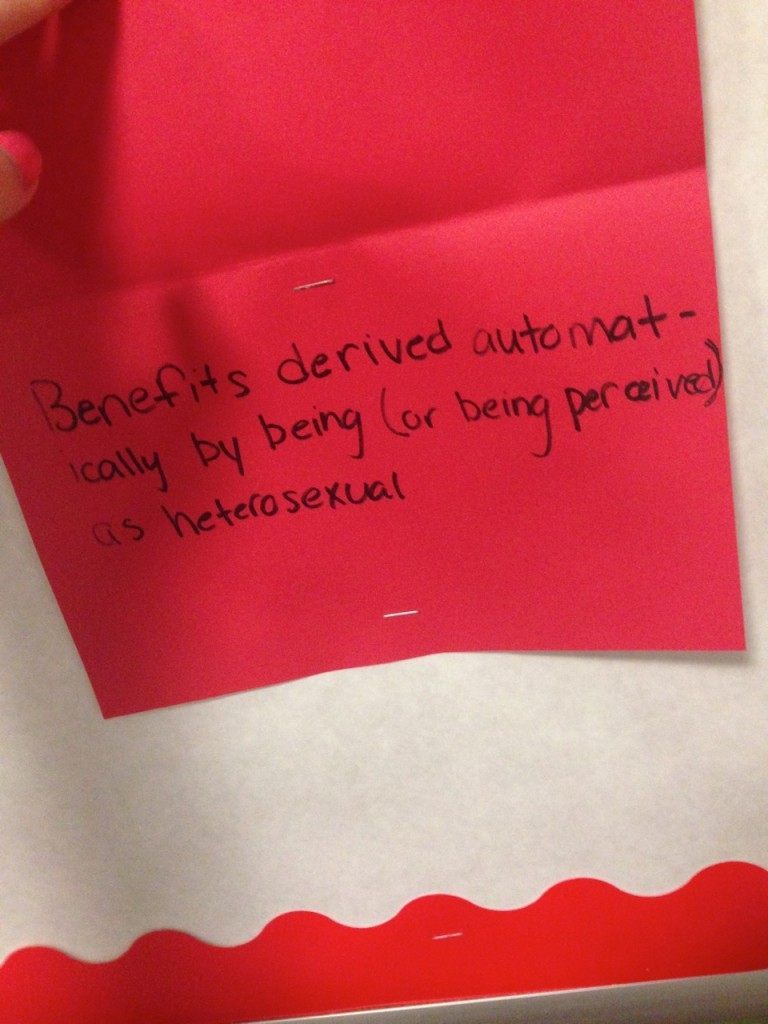 According to UW Director of Residence Life, Fred Fotis, the typical bulletin board put up in the dorms has to do with issues that are important for the mainly first and second year residents, such as fire safety, study tips, and career exploration. These boards are only allowed to be put up by Housing staff and must be “reviewed by the Residence Life Coordinator, who is the live-in professional staff member in the building.”

“I’m not surprised something like that got put up,” said Zachary VanNatta, a senior majoring in agronomy. “It’s a waste of money and inappropriate for a dorm, especially as university-sanctioned material.”

“I do not mind [the bulletin board] because the purpose of these boards is to educate and make people learn,” said Mohammed Aldolaijan, who lived in Ogg Hall when the bulletin board was up.  Aldolaijan mentioned that the board was in one of the most highly visible spots in the dorm – near the lobby elevators, where almost everyone living or taking classes in the six floor building passes multiple times a day.

Fotis echoed the same sentiment as Aldolaijan – “We think [the boards] help make an active and inquisitive community. Residents read them – they spark conversation and thinking.”

Will Doty was also in favor of the bulletin board, which got multiple complaints from both students and parents. “It’s necessary,” said Doty, a sophomore neurobiology major. “Straight folks need to understand a lot of stigma still exists against people who are [LGBTQ] even if it is not hateful.” Doty mentioned that “people misunderstand privilege to be something like an entitlement complex – it’s really an unearned benefit that comes from discrimination.”

There were many people that disagreed with Doty on both the concept of privilege and the necessity of the bulletin board – including the mother of both a current and a prospective UW student. When asked how she would feel if she saw this while on a dorm tour with her son, she said “I would have major misgivings – what kind of school supports that?” When given Doty’s definition of privilege, the mother, who would prefer to remain anonymous, said, “Why do you make everyone feel bad about themselves while you’re making a small, marginalized group feel good about themselves?”

Sophomore Lauren Kaberlein agreed with the mother’s comments. “I have never heard of heterosexual privilege until seeing this bulletin board and have no idea where that concept came from,” Kaberlein said. “I feel it is targeting heterosexuals for no reason. It’s almost implying I am wrong for being heterosexual because I get ‘special treatment.’”

Other students, like Sean Bray, are conflicted by the message of the board. “I personally don’t like the term [heterosexual privilege], but the purpose the board serves is important.” Bray, a senior, also made the point that it was important for boards like this one to go up on campus because they start dialogue. “College is absolutely the place to have this discussion,” he said.

Although the content of the board started debate, the biggest concern for VanNatta would have to be the lack of a bulletin board with opposing views, and the lack of opposing views shown by Housing in general. “In my opinion that space should be used to display useful information related to resident life, not peddle one-sided talking points.” Kaberlein agreed, adding, “It should not be in a dorm or any public bulletin board.”

And as for the mother of a current and prospective student, she said she saw it coming and had some harsh words for the creator of the bulletin board. “The only purpose it serves is for that RA or Housing staff member who made it to feel better about themselves. I’d expect it, especially at that school, but I wouldn’t want my kids to go look at it.”