I come to you, gentle reader, cap in hand, head bowed with shame, riddled with regret, overcome with sorrow. Forgive me, Twitter, for I have sinned.

I never anticipated and certainly never intended for Shanley Kane, the most gloriously abusive feminist troll on the internet, to ever delete her social media accounts merely because she lost an argument with me.

Had I realised the terrible result — the horrible sense of longing, the aching void, the awful and unshakeable loss I feel — at not being able to enjoy Shanley’s astonishing, foul-mouthed daily outbursts, I would never have engaged her in a conversation that might have led to her ragequit this week.

Because Shanley was by a considerable margin the best thing about Twitter. No one else better demonstrated the nuttiness, the craziness, the sheer unadulterated lunacy of the social justice tendency on social media than Queen Shanley.

Where are we now, without her vile invective spewing forth on unsuspecting members of the public at all hours of the day?

What have I done, robbing the world of her grotesque band of obsequious beta male groupies who hung on her every word in the remote hope of a hand job?

How will I ever forgive myself for having prompted this dear sweet innocent paragon of social justice who, yes, sure, okay, just a few short years ago was a vile racist troll banging a notorious white supremacist hacker, but shush, shush, shush…

Truly, I did not mean for this to happen when I responded to her latest barrage of nonsensical abuse by calmly pointing out that we would continue to report on her terrorising of the tech community until she stopped doing it.

Who could have predicted that it was precisely my measured responses that would finally push her off the deep end?

I know that some will say this is all a stunt.

They will say that Shanley, having failed to intimidate a gay man into silence with her usual allegations of “misogyny” and “harassment,” and having failed to isolate me from friends and colleagues by claiming, brilliantly, that I was a “white supremacist,” has disappeared so that others will remark: “There you go, see! Another brave woman bullied off the internet!”

But surely Shanley is not so petty. Brave, indomitable, courageous, indefatigable Shanley — the woman who replied “YOUR FACE” to Christina Hoff Sommers and who replied to anyone, no matter who it was and what dirt they had on her, in characteristic and inimitable style: “Fuck you!” 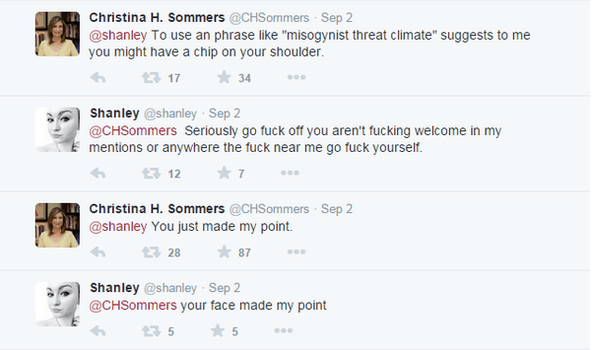 So please, readers, help me right this terrible wrong. Help me persuade Shanley to return. Fill out the petition below, and if it reaches 250 signatures, I’ll email her the results with the grovelling apology she so obviously deserves.