Someone using the name of Vice President Joe Biden’s son Hunter Biden had a profile on the Ashley Madison dating website for extramarital affairs, Breitbart News has learned.

Hunter Biden tells Breitbart News that the account is not his, but rather was created by one of America’s enemies to discredit him. He thinks it could have been due to his sitting on the board of a Ukrainian gas company, which outraged supporters of Vladimir Putin’s Russian regime.

Robert Hunter Biden, known colloquially as Hunter, is a business executive, a husband, a father, and reportedly one of Joe Biden’s closest advisers as the vice president considers launching a presidential campaign. Hunter, who met his wife Kathleen in the Jesuit Volunteer Corps, has contacted some of his dad’s supporters in advance of a possible Biden candidacy.

But he insists that he’s not the “Robert Biden” who was a fan of “Anything Goes” relationships with women on the website Ashley Madison, which arranges affairs for married people. Biden confirmed that the email address listed on the account belongs to him. But he thinks his enemies had access to his personal information, possibly through hacking his other online accounts – and that they fabricated the Ashley Madison account in his name.

“In fact, I no longer use the email address linked to this account as I became aware that this email account may have been compromised,” Biden said. “This is unfortunately not the first time that someone has used my name and identity to try to discredit me.”

Hunter Biden made global headlines in 2014 for joining the board of the Ukraine-based gas company Burisma Holdings during the height of the crisis in Ukraine. Biden’s father, Vice President Joe Biden, was engaged in an effort at the time to help Ukraine lessen its dependence on fuel from Russia.

Hunter Biden’s appointment certainly could have inflamed the Russians, who rely on exporting fuel to Europe.

Representatives for Hunter Biden told Breitbart News on background that he was the victim of concerted efforts by international enemies to get at his personal information. Biden’s Twitter account was hacked and his email account may also have been hacked. The representatives stopped short of confirming that the Russians were behind these smear efforts, and wouldn’t confirm exactly who did it.

The “Robert Biden” Ashley Madison account was validated with a credit card payment in June 2014 in the amount of $280.

The date of birth used to launch the account was also the correct day and month, but 10 years younger than Hunter Biden. Hunter was born on Feb. 4, 1970, but the Ashley Madison account in question has a date of birth listed at Feb. 4, 1980.

“From my understanding through press accounts, it is very easy to set up an account without someone’s knowledge as there is no requirement that an email address be verified and I am certain that is what happened in this case,” Biden said.

Here’s a screenshot of “Robert Hunter Biden’s” Ashley Madison account information, which Breitbart News found while searching in the aftermath of a hack on the website and its client list. 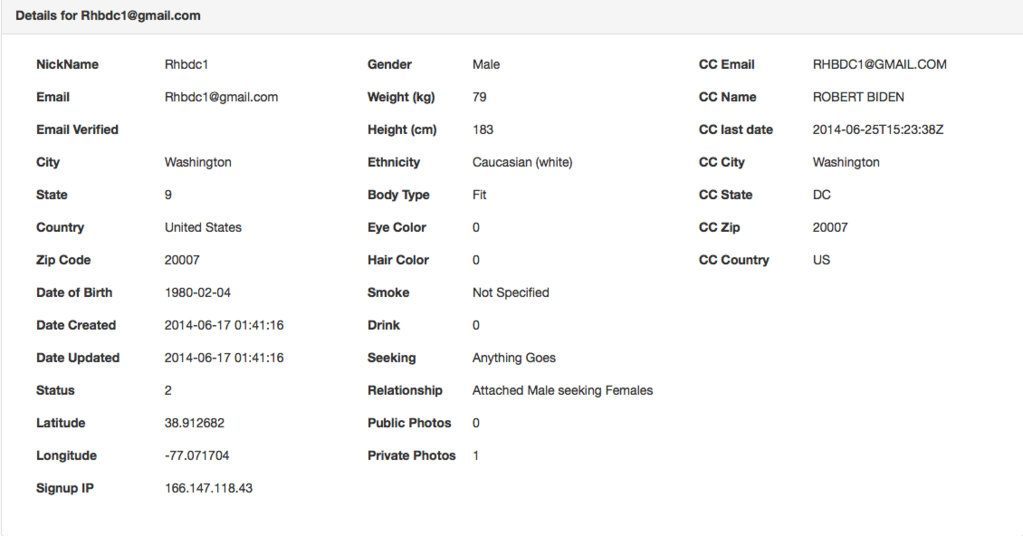 Vice President Joe Biden is seriously considering running for president in 2016 as Democratic front-runner Hillary Clinton battles a federal investigation into her use of a private email server at the State Department. Clinton’s poll numbers, dropping in the face of a progressive primary challenge by independent Sen. Bernie Sanders, have opened the door for Biden or another national Democrat to pursue the party’s nomination.

“I think that should give you some sense of the president’s view of Vice President Biden’s aptitude for the top job,” Earnest said.

Jordan Schachtel contributed to this report