Today, Salon gave a platform to a self-confessed pedophile to explain his urges in sympathetic terms. “I’m a Pedophile, But Not A Monster” reads the headline. It’s a long, self-pitying screed that ends with a call to be “understanding and supportive” of adults who crave sexual intimacy with children.

Forgive me if I’m not first to start the standing ovation. In fact I’m pretty sure most people will find the existence on Salon’s website of this post both shocking and distasteful.

In other words, progressives who got fired up about whether green and purple was a “rapey” colour scheme were suddenly fine with discussion of incestuous pedophilia from a 22-year-old in a chat room full of teenagers. It has been a somewhat grotesque spectacle to watch.

But these two incidents are merely just the latest in a disturbing trend of pedophilia activism on the Left, which has gone out on a limb time and time again to normalise child abuse. From the 1970s to the present day, organised pedophilia has been a recurring problem for the supposedly progressive movement.

The North American Man-Boy Love Association (NAMBLA) had early support from Allen Ginsberg. In the UK, the Pedophile Information Exchange (PIE) sought acceptance on the Left by affiliating itself with the National Council for Civil Liberties (NCCL), then run by prominent Left-wingers. Leading members of the Labour party, including Patricia Hewitt and Harriet Harman, were tarnished by their association with PIE, but many of them remain in positions of power in the Labour party.

There are plenty of decent left-wingers who are horrified by the attempts of pedophiles to piggyback on their movement, of course. It was former Labour minister Barbara Castle who sought to draw attention to the alleged pedophile rings of the British establishment in the 1980s. And the LGBT movement made an effort to ostracise NAMBLA after it tried to join the big tent of alternative sexualities. 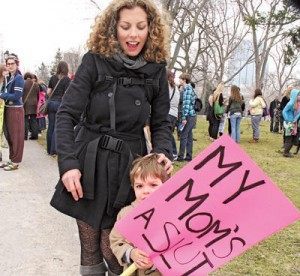 Pedophilia itself is of course not confined to one side of the political spectrum. But defending it does seem to be. Pro-pedophile activism continues to surface on the Left in a way that it simply doesn’t on the Right. Salon is one of the worst offenders: the left-wing website runs sympathetic features on pedophilia with alarming regularity.

In 2012, the site ran a story entitled “Meet the Pedophiles Who Mean Well“ about a group called “Virtuous Pedophiles,” who resolve never to have sex with children. (Sarah Nyberg made reference to this group in her leaked chat logs.) In the aftermath of Ariel Castro’s initial court appearance in 2013, Salon ran an op-ed entitled “Our Approach to Pedophilia Isn’t Working,” which argued that pedophilia ought to be treated as a medical issue rather than a moral one.

Yet, incredibly, Salon is by no means alone. In the aftermath of the Jimmy Savile scandal in the UK, the Guardian published a feature carrying the disturbing claim that there is “not even a full academic consensus on whether consensual paedophilic relations necessarily cause harm.” Even left-wing comedy websites are complaining about society’s “misunderstanding” of pedophiles, and their writers post pictures of their own children to pedophiles in “support” when the self-confessed perverts are outed.

What’s happening here? Why are defences of pedophilia so rampant on the Left? And why are pedophiles so attracted to the progressive movement, as opposed to conservatism, libertarianism, or even anarcho-capitalism?

The most likely answer may be difficult for left-leaning readers to accept. For decades, moral relativism has underpinned radical left-wing thought. This is particularly clear when we look at how abuses in Muslim communities are treated. When the Conservative government in Canada labeled female genital mutilation and forced marriages as “barbaric cultural practices,” they were criticised by leading Canadian leftists.

See also: the breeziness with which feminists ignore abuses against women all across the Muslim world, and the timidity of gay rights campaigners to challenge Muslims on gay rights. Not Islamists, you understand, but mainstream Islamic society, in which simply being gay can get you killed in a dozen countries or more. Oh, and Rotherham, where moral relativism and the fear of being seen as “racist” got 1,200 white girls raped.

In the U.S, where a left-wing administration is in charge, relativism has even seeped into the military. As was recently reported, American soldiers in Afghanistan are now being instructed to ignore the sexual abuse of boys by Afghan allies. Campaigners against religious barbarism like the UK’s National Secular Society have condemned the relativism at the heart of radical left-wing identity politics, but to no avail.

It’s easy to see why pedophile activists would be attracted to a movement that makes excuses for practices like FGM. If the mutilation of little girls can be defended on the grounds of cultural relativism — “that’s just how they are” — what can’t be defended?

Anarcho-capitalists and libertarians may wish to dismantle many social and legal checks on personal behaviour, but they draw a hard line around behaviour that harms or violates the rights of others. Relativists have no such rules: by definition, they don’t believe in universal rules at all.

Horrifyingly, there are signs of a new pedophile acceptance movement forming on the Left. Just as Allen West warned, the gay rights movement is being used as a template. First comes the argument that pedophiles are just “born that way,” absolving them of any moral responsibility for their desires. Then comes the argument that pedophiles are just normal people, like the rest of us, but somehow impoverished or victimised by their own condition.

Inevitably, our society’s current ostracisation of pedophiles will be portrayed as an injustice: an oppression from which pedophiles must be liberated, or for which they deserve our sympathy. And woe to the oppressors! Quietly, in progressive columns and academies around the world, progressives are losing their footing and sliding down that slippery slope. Publications like Salon are abetting the turpitude.

“Acceptance” and relativism are essential tools of the partisan Left, which abandons all sense of moral consistency when one of its own is accused. The furious defence of Sarah Nyberg was redolent of the Lena Dunham scandal, in which similarly bizarre and disturbing revelations about Dunham’s relationship with her sister were defended to the hilt by media luvvies.

You know, a bit like how the BBC covered up for Savile for all those years. Just about the only kiddy-diddlers leftists don’t stick up for are Catholic priests, for reasons best known to themselves.

Compare this to conservative molester Josh Duggar, who can only muster support from has-beens like Mike Huckabee. The rest of the conservative movement, from National Review to Breitbart, were unequivocal in their condemnation of the Duggars. But for the hysterical defenders of Nyberg and Dunham, principle — not to mention the safety of children — can’t be allowed to come before politics.

Aggressive public displays of virtue are where the morally deplorable hide. The trend of social justice warriors with closets full of skeletons is common enough to be a meme at this point. It might even be part of the job description. Whether by cleansing progressives of sin through virtue signalling, or simply enabling them to hide in plain sight, slacktivism provides a welcoming environment for scammers and the unsavoury, which is why progressives protect their own: they know it could be any of them next.

The one silver lining is that such people are set to lose the support of the centre. Nyberg’s defenders hoped that the story would be contained in anti-establishment publications like Breitbart. But now it’s spreading to the mainstream, with critics of Breitbart stepping into the fray to admit that the response from the Left has been hypocritical and troubling.

Eyebrows were raised when the media elite collectively decided to make transgenderism “the next civil rights frontier,” because although most people are deeply sympathetic to that condition, the science is very much out on treatment pathways. But this is really, as we say in England, something else.

It is particularly crucial to protect children from pedophiles in the age of the internet, when adults have unprecedented access to minors via internet forums, chat rooms and gaming. Children get phones and tablets earlier and earlier, and nearly all kids play such social games.

Twenty-first century pedophiles aren’t hanging around school gates with candy: they’re lurking online, like Sarah Nyberg. And parents are in some cases decades behind the times when it comes to protecting their little ones.

Radical leftists may be planning to make pedophilia another front in their civil rights battles, but it won’t happen without a fight. Nor should it.