Tensions flared Wednesday night outside Jay-Z’s exclusive nightclub when guests at Hillary Clinton’s fundraiser confronted a group of left-wing protesters who were demonstrating against Clinton.

One Clinton-booster’s shouted defense of the candidate bordered on the surreal: “ONLY four people died in Benghazi.”

The Clinton campaign celebrated the end of its fundraising quarter with a grand finale at rapper Jay-Z’s 40/40 Club on 25th and Broadway in Manhattan.

Partygoers were charged $2,700 each for a photo with Clinton, prompting Occupy Wall Street activist Marni Halasa and like-minded colleagues to stage a demonstration outside the event.

The activists peacefully asked pedestrians for 27 cents to pose for photos alongside a puppet Clinton with a Pinocchio nose. Some pedestrians found it funny. Clinton’s partygoers exiting the event did not.

Two female guests from the fundraiser came by and called the activists “losers.”

Another group of guests got more confrontational. “Two men approached us and they were trying to have a conversation. Everything got kind of heated,” Halasa told Breitbart News. Halasa described some of Clinton’s guests as “defensive.”

“There was a foursome. The guys came up and they were saying stuff about how she’s a populist,” Crown said, noting one fundraiser guest who was very confrontational. “He was very aggressive, saying, ‘You had your say, now I’m going to say something.’ He said, ‘Only four people died in Benghazi.'”

“That was his point of view, which I thought was absurd,” Crown said. “He was pissed off. He gave his two cents and walked off. Maybe he was trying to show his girlfriend that he was hip enough to talk to the opposition.” 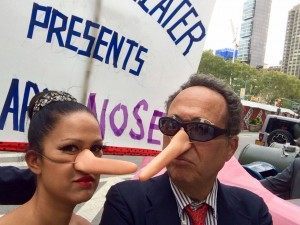 “They didn’t like us,” Crown said of Clinton’s “well-heeled” guests. “They didn’t like what we were doing. They had just spent $2,700 dollars” to get a photo with the candidate. “We were there to expose the phony populism.”

But Halasa said that a Tea Party activist who walked up to the protest was very pleasant and had an engaging half-hour conversation with the left-wing activists.

“He stayed there and talked to us for a half hour,” Halasa said. “It was done in such a nice way. That was very surprising to me.”