Radical cultural authoritarian and Salon contributor Arthur Chu has called for the repeal of a key legal foundation of free and open discourse in the U.S, which protects web hosts from legal liability for third-party comments on their sites.

In an article for TechCrunch, Chu called for the end of Section 230 of the Communications Decency Act of 1996, which allows website owners to be treated as platforms rather than publishers. Whereas publishers like newspapers can be sued if they publish slanderous articles about other individuals, Facebook or Twitter cannot be sued for hosting slanderous comments.

Section 230, in other words, is what allows website owners to take a hands-off approach to the speech of ordinary web users. Online news sites like Breitbart have legal responsibility for their published articles, but not for anything that’s said on the Disqus commenting platform that appears below our articles. Without Section 230, speech on the internet would be tightly managed by web hosts keen to avoid lawsuits.

But Jeopardy! champion and occasional cupid Arthur Chu wants that to end. Writing in TechCrunch, Chu says it is “past time” for Section 230 to be repealed, complaining that digital publishers can’t be sued for “harassment” on their platforms. According to Chu, Section 230 is responsible for creating a “hostile working environment” on the internet for women and minorities, who he says are “blasted with far worse harassment” on the internet than white males.

The article caused a stir on social media, where Chu was accused of wanting to cripple open platforms like Facebook, Reddit, and Twitter, as well as comments Sections underneath online publications. In response, Chu admitted that he had no problem neutering these platforms. “Those things are garbage,” he said. “Garbage, garbage, garbage” he later elaborated.

Ok but honestly those things are garbage

The specific thing that is garbage is the incredible prevalence of effectively consequence-free speech https://t.co/HhZcwxKd6F

Chu also indicated that he would have no personal objections if online communication were to be reduced to the same level of regulation-induced slowness as print media.

It is not the first time that Chu had expressed a loathing for what he calls “consequence-free speech.” He is well known for his Orwellian views on the policing of thought and ideas. In one notorious Facebook post, Chu described himself as a “social justice stormtrooper” who regularly “mindkilled” and “purged” himself of “dangerous, unthinkable thoughts.” 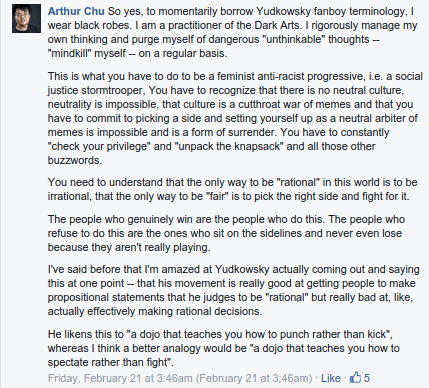 In attacking Section 230, highlighted by the Electronic Frontier Foundation as “the most important law protecting internet speech,” Chu has moved beyond sinister Orwellian rhetoric to a concrete policy proposal. In doing so, he alienated a wide swathe of tech commentators — even those who previously supported his rhetoric on identity politics.

Prominent legal blogger Ken White, also known by his online moniker “Popehat,” said Chu wanted to make “lawyers richer and ordinary people quieter,” pointing out that Chu himself would be a likely target of lawsuits if Section 230 was removed. “Internet harassment and free speech are serious issues, but Arthur Chu is not a serious person,” concluded White.

Others, such as the normally mild-mannered Reason columnist Cathy Young, were blunter in their assessments:

Even former ideological allies of Chu, such as the notorious activist Randi Harper and Silicon Valley social justice warrior Anil Dash, came out against his position. Harper was particularly unequivocal, accusing Chu of wanting to “break the internet” and complaining that his article should not have been hosted on TechCrunch.

@arthur_affect so… that's not true. 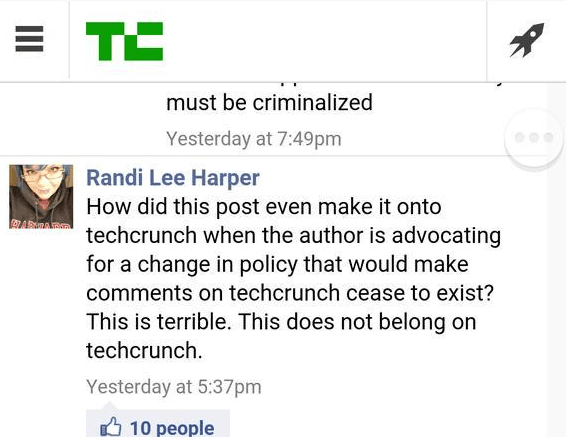 It was only a matter of time until someone short-sighted with a large audience decided to shoot down CDA230. Ugh no. https://t.co/u9EbTFJb9Z

I AM SO MAD I JUST KICKED MY DESK.

Chu’s column is just the latest sign of a tentative push from social justice warriors to use the state to regulate speech on the internet. Feminists at the United Nations recently called on national governments to force ISPs and search engines to “supervise their content and its dissemination.”

That too led some progressive columnists to distance themselves. The divide between pro-free speech, pluralist liberals and politically intolerant progressives has been apparent for some time, but now even some progressives are beginning to get cold feet.