LAS VEGAS — A raucous group of Hillary Clinton supporters rallied with a mariachi band above the Las Vegas Strip with just hours to go before the Democratic debate.

Nearby, a nurses’ union staged a march in support of Bernie Sanders, who also drew fans and families from far away in support of his insurgent socialist candidacy.

“This is the first time I’ve ever actually wanted to vote for someone,” said Bradley Peter, 31, who said he had voted for Obama just to keep John McCain out of the White House. He and his pregnant wife had traveled from Southern California with their family to support Sanders in the debate. While Hillary was “not terrible,” Peter said, Sanders had a better track record, and was more trustworthy: “At least he’s going to do what he says.”

RT: #Nurses pour down stairs on #LasVegas strip during the march to the #DemDebate! #DebateWithBernie… #UniteBlue pic.twitter.com/PIF4Ikvhxz

They did not seem to mind the loud music from roughly one hundred Hillary supporters, as the pedestrian bridge over Las Vegas Boulevard shook and police intervened to allow passers-by to walk through the crowd. Cries of “!Si, se puede!” mixed with cheers as Hillary’s crowd, nearly all clad in light blue, celebrated the Democratic Party frontrunner.

Not everyone agreed, however. Up the escalator came Anne Cohan of Arvada, Colorado, a recent widow who hopped on a cheap flight after being inspired by Sanders at his rally in Boulder last Saturday. “I’m so excited to be here,” she told Breitbart News. She held aloft a homemade sign reading “More Debates Now!” and explained: “[Democratic National Committee chair] Debbie Wasserman Schultz has cut the debates short. We are just having six debates, and the Republicans have had two already.” 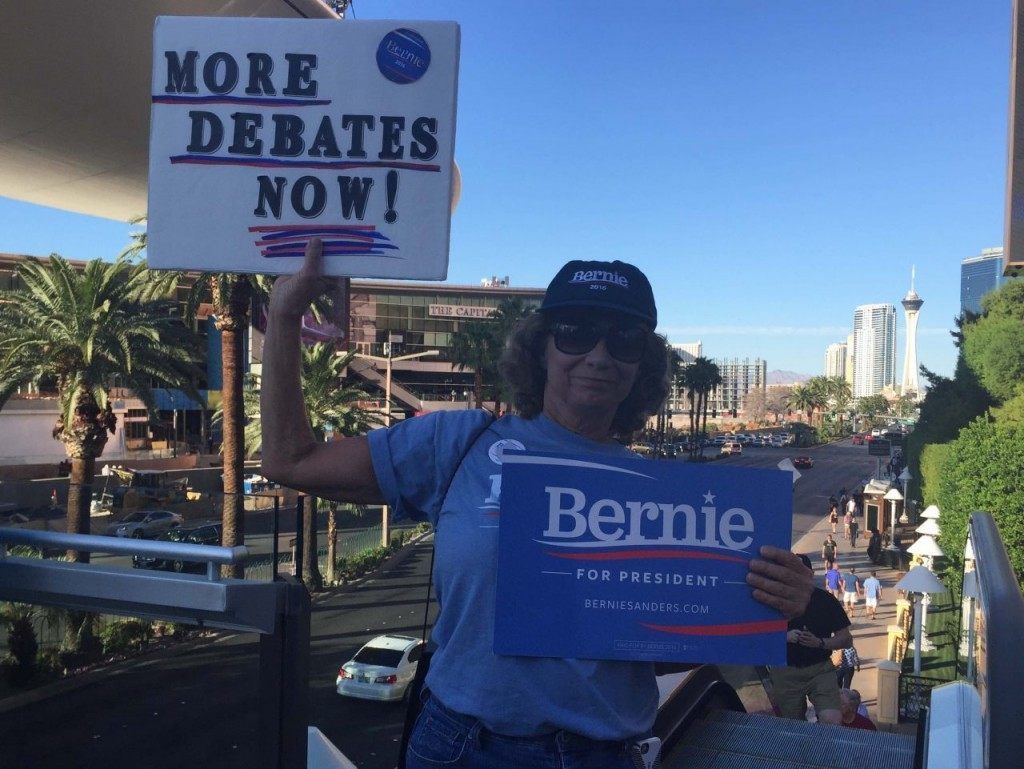 She said she expected Sanders to increase his support after the debate. “I hope to see Bernie be Bernie,” she said.